Al. Tsipras: The goal is a clear victory for SYRIZA in the next elections 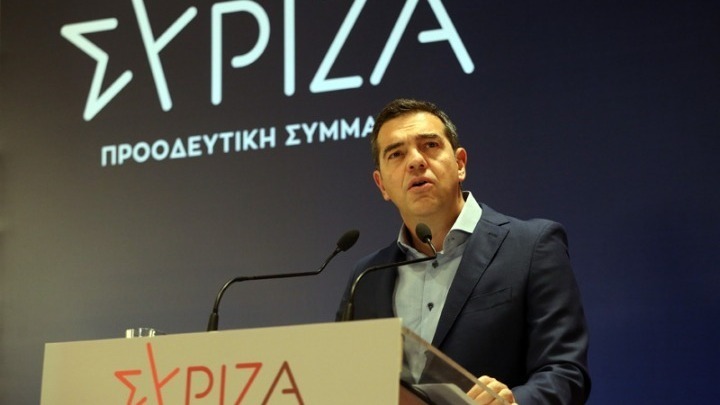 Alexis Tsipras set the political goal of SYRIZA-PS in the next elections for victory and the formation of a progressive government, speaking to the Central Committee for Reconstruction.

He stressed that "the great political battle of the next elections will be very critical for the country", explaining that Greece will sink into the humanitarian crisis and social disintegration, if we do not stop the work of the Mitsotakis government… Why Mr. Mitsotakis's Right "consciously aims at a Greece in which few will prosper and many will suffer."

He referred to the criticality of the next elections, when the simple analogy will be implemented for the first time: "Mr. Mitsotakis, seeing that he is slowly isolating himself and allies willing to hold his hand, finds only the far right, scenarios. It discounts double ballots, despises the electoral process of simple proportional representation, tries to drive the authentic popular will ". He then described SYRIZA's goal: "For us, things are clear: We reject the tricks, the scenarios, the tactics. We say clearly and bluntly: The next elections where the popular will will be authentically expressed, will not be fruitless. Because the clear victory of SYRIZA on the Sunday of the elections, will give a new progressive government in the service of the place and the society, on Monday morning. No new electoral adventures, no scenarios of division and anarchy. A new large social majority that will guarantee the future of our country with security and confidence. Clear conversations, clear solutions ".

The leader of the official opposition criticized the government, describing in black the consequences of its policy on the Greek people, "which has reached its limits".

- First: He has thrown a white towel in the pandemic. With over 15.000 dead. With 300 losses per week. With the country consistently in the worst positions in Europe in proportion to the population. And with over a million unvaccinated over 50. As a result of conscious choices, criminal omissions, and a strange design.

- Second: 'Let the vise of precision drown the middle class and the popular strata. Simply watching the price increases in basic goods besiege the daily life of the employee, while wages remain stuck. And selling out PPC at the most critical time, when unprecedented increases in electricity cut off the legs of households and small and medium enterprises.

- Third: It marked the working world. Eliminating the 8 o'clock. Introducing unpaid 12 hours. Keeping the salary fixed. Dissolving the Labor Inspectorate. Privatizing supplementary insurance, opening a hole of 70 billion and throwing in the social dividend and the 13th pension.

- Fourth: He deceived the middle class by demolishing small and medium enterprises. With the bankruptcy that liquidates the houses and shops of the citizens. With the debt range threatening small and medium-sized businesses now that the suspension of payments due to lockdowns will be lifted. With the exclusion of the vast majority of companies from the resources of the Recovery Fund.

- Fifth: Dissolved Education. Flying 40.000 students outside universities. Stacking 25 and 30 students per class in the midst of a pandemic outbreak. Closing and merging departments in schools and universities. Degrading our university faculties for the sake of their friends college owners.

And, finally, he turned the state into a shop and the prime minister's office into a public limited company, which does business, squanders money, serves and protects the interests of a political and economic elite and its courtiers.

Turning his fire on Kyriakos Mitsotakis, he stated that "all of these have an orchestrator and guide, the excellent offspring, who turned out to be a cheap Balkan Kurts. Who hides his incompetence and authoritarianism behind bought gangsters and submissives ". Referring to the issues of transparency, he said, "he is now trembling at the idea of ​​setting up a committee of inquiry in Parliament with the votes of the entire opposition for the Petsa list, despite the fact that he will have a majority in the Commission. "As he trembles at the revelations from the Pandora Papers' international journalistic inquiry into offshore and political corruption, he urges his MEPs not to vote in favor of launching an investigation."

The way to rid the country, said Mr. Tsipras, is "for SYRIZA-PS to defeat, by state, the state of Mitsotakis and the parastate of entanglement, in the next elections. To emerge, not just a first force, but strong enough to determine developments. "

Referring to international developments, he argued that "the progressive shift is beginning to be reflected internationally. "Things are changing in the world around us and the ideas of the Left are coming to the fore again.

Returning to the 3rd Congress, he said: "The 3rd Congress of SYRIZA-PS, for which we are called to make decisions today, we do not want to be, and will not be, a conference of applause, nor an arena of mechanisms. But a rich, deep exchange of ideas, reflection, self-criticism and above all a starting point of struggle and a driving force for action ". He called on all "to make this process the business of many. Those who support us and are not in our lines. Those who expect a better tomorrow from us. But also those who look at us critically, even suspiciously ". He stressed that the party needs a new beginning and appeared optimistic that Greek society has antibodies to defeat the political and social pandemic of Mr. Mitsotakis ". He closed with the certainty and the slogan "Yes we can".

WHERE: Omicron risk is very high - Acceleration of vaccinations and immediate action