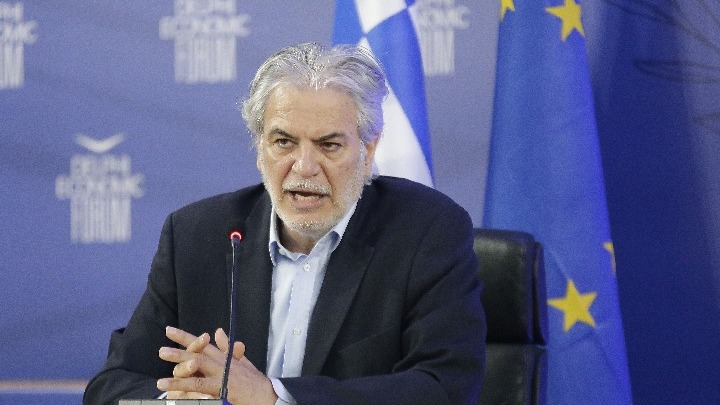 The purchase of new aircraft over a period of five years was announced by the Minister of Climate Crisis and Civil Protection, Christos Stylianidis, during the "1st Daily Summits - ESG" that started today. As Mr. Stylianidis said, in a horizon of 4-5 years, a total of 7 Canadair will be purchased, one of which will come from the EU program, RESCEU.

"Greece will be the first to receive the first Canadair plane from RESCEU," he said.

Answering questions from pupils and students coming from the fire-stricken Evia, Mr. Stylianidis stressed that people in Evia experienced a very traumatic summer, a traumatic experience, which unfortunately continues.

"There is no doubt that we, the elders who make decisions for you, the new generation, should apologize to you, because we could not prevent what happened," he stressed, adding that if in Evia there had been a good clearing of the forest, there was a other forest management, as a precautionary measure, would have avoided a large percentage of the effects.

The role of the state in terms of accelerating the reaction to tackling climate change is important and at the same time we must find strategic measures that will work, so that "we do not have another Evia or another Eye".

As far as forests are concerned, in the next period, as Mr. Stylianidis said, large fire zones should be built as well as the forests should be cleaned. In addition, as he stressed, those people who know or work in the forests will need to be exploited. "To utilize them and build teams and companies that will manage the forest and possibly connect them with a logic of Renewable Energy Sources, biomass.

There are similar examples elsewhere, we can use them. "This is the part of forest management," he said. "At the same time we should do something similar to what we did in Alepochori where we are afraid that a flood could cause casualties, due to the large flow of water because the forest was burned," he added, explaining that evacuation exercises should be carried out. population and to inform the world so that they know what they are doing at the time of the crisis.

He also referred to the utilization of volunteer groups while emphasizing the need for a system and organization for them. He also spoke about the AIGIS program which, as he said, "provides a new school for the Civil Protection of volunteers. There, each volunteer will have a specialization that will give him a role at the critical moment ". "The climate crisis is here, it is running fast, in order to be able to prevent it we have to make leaps, we are far behind.

The jumps need to be made with the purchase of technology, we will get the so-called early warning systems, we will get detectors, they are in the design, they have been approved, they are in the Recovery Fund and in the NSRF. I believe that we will upgrade the capacity of Civil Protection but if the citizen is not present in all this, if society is absent we will do nothing.

You can not deal with what comes with the logic of technology or aircraft or machinery. "This crisis wants the citizen at the center and especially the young people", pointed out Mr. Stylianidis.

Regarding Ballos, Mr. Stylianidis said that living his experience, talking to the scientific potential of the country and doing a personal autopsy, it seems that Attica was built anarchically, with streams that have not been demarcated. "We need a very structured policy that will concern the strategy of flood control with beginning, middle and end", he stressed while adding that other immediate solutions must be found that will reduce the phenomenon and at the same time the Municipalities, the Regions must act .

"All this mechanism to clean the roads, to be ready, not to let the carried materials create the big problem and to be ready in the critical phase", he noted. The Minister of Climate Crisis stated that last Thursday night we had 147 mm of rain in Ampelokipi and in Patisia 150, in Mandra we had 88 mm. At the same time the meteorological indication from three different meteorological systems showed that 3-6 on Friday morning there was a chance to reach a rainfall summed with the previous one at 220-230 mm.

"No one can deal with the effects of climate change alone. "If we assimilate this reality that we must all be together in this confrontation then we will reduce the consequences," he concluded.

Beans are high in protein and other important nutrients. Their consumption can help in weight loss, contribute to ...
Read more