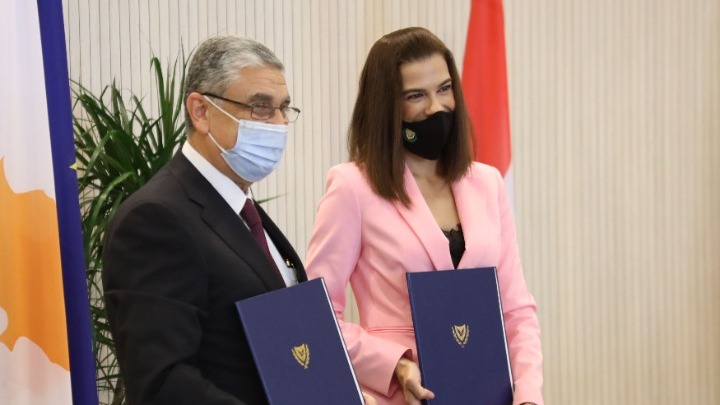 The Memorandum of Understanding between Cyprus and Egypt for the interconnection of the electricity networks of the two countries was signed today, Saturday, October 16, in Nicosia, by the Minister of Energy, Trade and Industry of Cyprus Natasa Peleidou and the Minister of Electricity and Renewable Energy Mohamed Shaker El - Markabi.

In a joint statement, the two ministers said that the electricity interconnection is an important component of the ongoing strong relations between Cyprus and Egypt, as well as the strategic cooperation between them, and pointed out that the agreement is a big step forward in terms of synergies needed to facilitate the integration of additional Renewable Energy Sources in the mixture of electricity and primary energy of each country.

As Ms. Peleidou and Dr. Saker El Markabi point out, what they have agreed on is the establishment of a general framework of cooperation, which will allow the design, licensing, development and implementation of the electrical interconnection. Among other things, they note, "this cooperation will be aimed at facilitating the timely issuance of permits and approvals, both for conducting technical and financial studies and for the implementation of the interconnection, discussions and coordination between Regulators and Administrators. Transmission System of the two countries, and in coordination in relation to the appropriate measures to ensure the safety and physical protection of the electrical interconnection ". Regular meetings between ministers or their representatives will be held to monitor and monitor the implementation of the Memorandum.

Welcoming the Egyptian delegation headed by Minister Mohamed Saker El Markabi in Cyprus, Ms. Pileidou stressed that the Memorandum, in addition to reaffirming the strong ties between the citizens of the two countries, marks an important milestone in the joint efforts of Cyprus and Egypt. promoting regional cooperation in the field of energy. "Building on the work done by our governments in recent years, especially during the tripartite meetings of our leaders, the Memorandum further strengthens the design, development and implementation of the Cyprus-Egypt electricity interconnection, as an additional element in shaping the emerging of the Eastern Mediterranean energy corridor ", he noted. For Cyprus, the minister added, "the electricity interconnection with Egypt has the potential to be a cornerstone of our efforts to transition to a green economy and further penetration of RES in the energy mix, while for both us and Egypt strengthens our ability to meet our commitments under the Paris Agreement on Climate Change. "