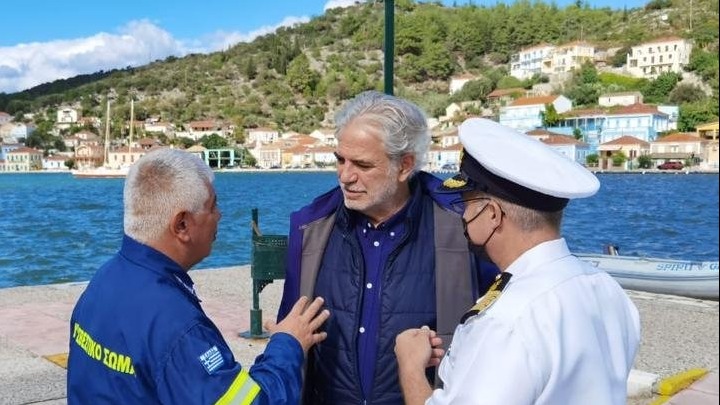 The Minister of Climate Crisis and Civil Protection, Christos Stylianidis, carried out an autopsy on the damage that the island of Ithaca has suffered due to the bad weather "Ballos".

Mr. Stylianidis went to the island today accompanied by the Deputy Minister in charge of state aid and rehabilitation from natural disasters, Christos Triantopoulos, as well as the Secretary General of Civil Protection, Vassilios Papageorgiou. The minister also had the opportunity to talk to residents of Ithaca and to be informed about the problems they faced due to bad weather and then a meeting was held at the town hall of the island with the participation of the mayor of the island, Dionysios Stanitsas, the prefect of Ithaca, Athanasios Liv of the members of the Municipal Council, the presidents of the local communities, as well as the commanders of the Fire Brigade, the Hellenic Police and the Coast Guard.

By order of the Prime Minister, we came to visit Ithaca especially, because it is the region of Greece that has been hit hardest by this natural disaster, "Ballos", as we called it. Ithaca has received such a large volume of water that according to statistics, as I was informed by experts, it is the fourth or fifth record of rainfall. 345mm on this small island. Do you understand what damage has been done ", said among others Mr. Stylianidis while he added that during the autopsy they carried out with the Deputy Minister, Christos Triantopoulos, the general secretary, Vassilis Papageorgiou, accompanied by the mayor and the rest of the Municipal Council and all of the authorities of the island, what they saw "is shocking". "We visited the church, houses, businesses. The island needs immediate help. The Prime Minister, who has already talked, as soon as we got off the helicopter, with the mayor, ordered us to proceed immediately. For this reason, the Deputy Minister, Mr. Triantopoulos, is with us, who is responsible for the issues of recovery after natural disasters. That is why we are here, to provide solutions for Ithaca ", pointed out Mr. Stylianidis.

"This is what we did in Athens. If you read today articles by teachers about the danger of the phenomenon, it is obvious that we made the right decision to close Kifissos for the whole night. Because those were the predictions we had. Our only guideline for every decision is the protection of human life. "And we did that in Ithaca and in Athens and in Halkidiki and in Crete", the minister underlined.

Finally, he thanked and congratulated "the heroes of the security forces and the Armed Forces, all those who in that difficult moment acted effectively and saved lives, the invisible heroes throughout Greece." "The Fire Brigade with EMAK, the Armed Forces, the Greek Police, the Coast Guard deserve our recognition and gratitude", concluded Mr. Stylianidis.