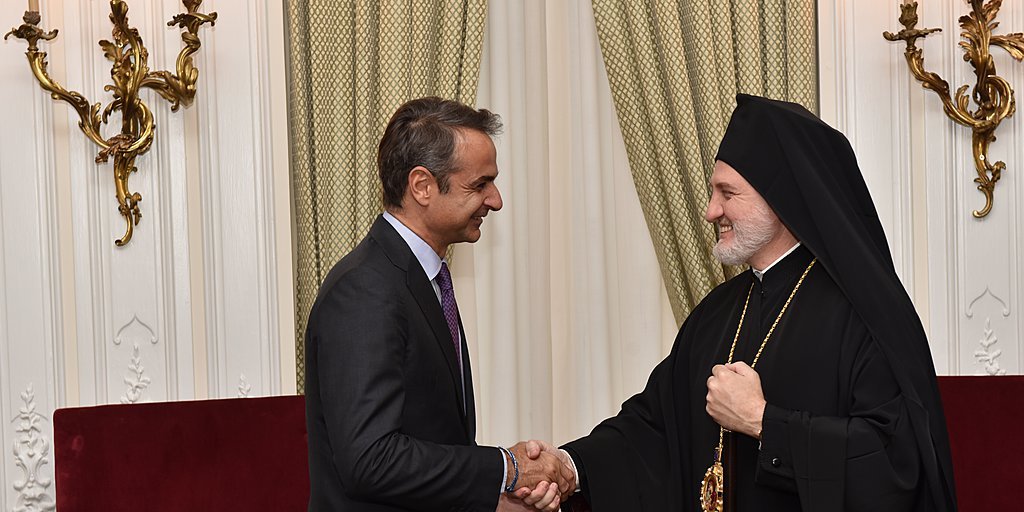 The caution between the two sides was lifted after the announcement of the Archbishop of America, Elpidoforos, in which he expresses his sincere regret for the suffering he inadvertently caused to the Cypriot community and the flock of the Greek-American community. "Turkey House" in New York does not in any way accept the sufferings that the occupation has brought to the island of Cyprus.

Yesterday in the evening it became known that he would not Happen the scheduled for Today is a tour of Prime Minister Kyriakos Mitsotaki by Archbishop Promising at "Ground Zero" and the Holy Temple of Agios Nikolaos. In the program of Mr. Mitsotaki a meeting with the Wall Street Journal management team was added.

The release of the message was deemed necessary after the pile of reactions provoked for the presence of the American Archbishop of Hope, next to the Turkish President Erdogan and the leader of the pseudo-state, Ersin Tatar, at the events for the inauguration of the "House of Turkey". Yesterday, the government spokesman Giannis Oikonomou also expressed the government's dissatisfaction with the presence of Mr. Hopeful at the opening of the "House of Turkey".

The message of Archbishop Elpidoforos is as follows:

"As Greek of Istanbul I and my family have experienced the terrible consequences of uprooting from our ancestral homes, like many of my compatriots, but also of the Imbrians and Tenedion, due to another escalation of the Cyprus issue in the 70s. I grew up with this pain, γι᾽ this and I understand their pain Cypriot our brothers and sisters, as well as their feelings and reactions. I consider them expressions of pain of people who lost everything: property, homelands, dreams, family, relatives.

So I want to declare to everyone that my presence at Monday's event could never be a recognition of a calamity, a refugee, an occupation. My presence has always had the same constant orientation: honest and courageous dialogue, for a future with peace and protection of religious freedom. We are all united in defending our national interests, each in his own way and role. But united, committed to the same goal.

I sincerely regret the pain I inadvertently caused to my Cypriot and Greek-American brothers, especially to my favorite flock. I pray for a just and lasting solution to be found in the martyrdom of Cyprus, as the Cypriot people expect it, based on international law and the protection of human rights, in accordance with UN resolutions, and I work for this purpose.

The Greek Orthodox Archdiocese of America has been for a century next to Hellenism everywhere, defending its expectations. "Our unity is my ministry and my debt."

Former Foreign Minister and former PASOK President Evangelos Venizelos expressed his support for Archbishop Elpidoforos, describing Athens' dissatisfaction with his presence at the opening of the Turkish Center in New York as deeply unhistorical.

The statement of Mr. Venizelos states in detail:

The government spokesman's statement, expressing the Government's annoyance and dissatisfaction with the presence of the American Archbishop at the inauguration of the Turkish center in New York, is deeply unhistorical and shows a complete lack of sense of the status quo. the institutional framework of its relations with the Hellenic Republic ".

The public political criticism of the Ecumenical Patriarchate by the Greek government because it has, for reasons of protection of its ecclesiastical position and religious freedom, the de facto obligation to seek relations of mutual respect with the Turkish authorities, is myopic. As myopic is the refusal of the Greek government to respond to the systematic and fierce political attacks launched by the Russian government at the highest level against the Patriarchate and the Ecumenical Patriarch personally for the granting of the Ukrainian Autocephalous. The Archbishop of America is the hierarch of the Ecumenical Throne and represents him in the United States as exarch. He is obviously acting in consultation with the Patriarch in the context of the painful and sacrificial wisdom of Fanari ".

And Mr. Venizelos concludes: "Instead of easy and" popular "anti-Turkish shots with a" ball "the Ecumenical Patriarchate, it would be preferable for the Greek and Cypriot governments to highlight the outstanding problems raised by the statement of the Patriarchate representative in New York ceremony, attended by the UN Secretary General ".

The "Yellow Vests" give a dynamic rendezvous on the streets of Paris and other big cities of France, on the occasion of the energy crisis and ...
Read more
WORLD

The President of France Emanuel Macron today described as an "unforgivable crime" the bloody repression of the mobilization of Algerian protesters, 60 years ago in Paris, when ...
Read more
News Bulletin Athens 9.84

The bad weather "BALLOS" in Ithaca left huge problems in infrastructure and private property. An autopsy on the island is carried out by a government unit headed by the Minister of Civil Protection, Christos ...
Read more
WORLD

Egypt: Solidarity with the people of Greece for the catastrophic floods

Egypt expressed its full solidarity today with Greece for the catastrophic floods that occurred in the country. "The Egyptian Ministry of Foreign Affairs expresses its ...
Read more
WORLD

New incendiary statements from Ankara, with the Vice President of Turkey talking about Cyprus, characteristically stating "it is an island, which is ...
Read more
984