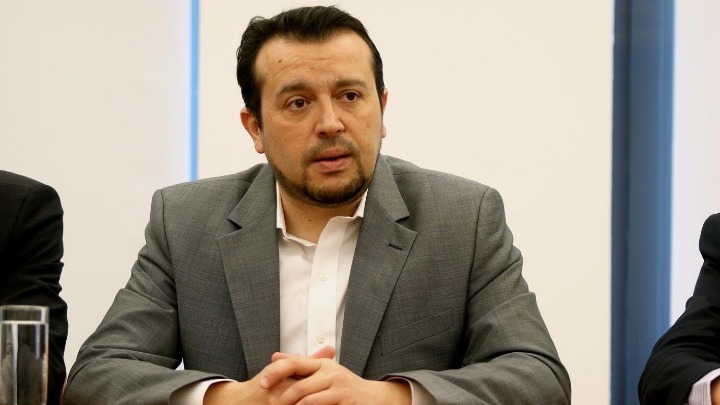 The investigation of the case with the former Minister of State Nikos Pappas as the central figure and with the background for the competition for the television licenses in 2016 started with the testimony of witnesses.

The first witness was called to testify the economist Kyriakos Tombras, who allegedly played the role of mediator between the businessman Christos Kalogritsa, with whose report the "tangle" of history began and the representatives of the Lebanese television company for the creation of the station.

The investigation process started after the decision of the Parliament to proceed against N. Papas in the criminal prosecution for the misdemeanor of the breach of duty, an offense, which is connected with the competition of television licenses in 2016.

The case, as it is known, reached the Parliament after the transmission of the indictment filed, at the beginning of July 2020, by the businessman Christos Kalogritsas, who in the context of his legal dispute with the Lebanese construction group CCC, spoke about a fictitious transaction. of which he was given € 3 million to participate in the competition for television licenses.

E. Danali: To make the Mediterranean diet the new lifestyle, the mainstream, the trend

The platform for the heating allowance is open until November 10. This was stated by the Deputy Minister of Finance, Theodoros Skylakakis, speaking to ANT1. He even noted that ...
Read more
SPORT CITY

Without his fans, Olympiacos will play in the derby with PAOK, as the Appeals Committee of the EPO did not ...
Read more
984

Tripartite Greece-Egypt-Cyprus: At the "table" the developments in the East. Mediterranean, Cyprus and Libya

Developments in the Eastern Mediterranean, the Cyprus issue, Libya in the run-up to the December 24 elections, in Syria and Lebanon, are at the center of ...
Read more
984

Towards a drafting document by the European External Action Service (EEAS) on how the European Union could respond ...
Read more
SPORT CITY

Martins in Eintracht - Olympiacos and Lambrecht in Copenhagen - PAOK

The Portuguese referee, Thiago Martins, was appointed to direct the match of Olympiakos in Frankfurt for the 3rd match day of the Europa League. The Belgian Eric ...
Read more
984

The second and last for this year, the second round of the mobility of civil servants begins. With a circular issued by the Ministry of Interior, he lit the "green ...
Read more

Traffic lights with wireless red signal violation detector will "photograph" the license plate of the offender and from next month drivers will receive a house ...
Read more
CIVILIZATION