Guterres: Dialogue and understanding between the US and China 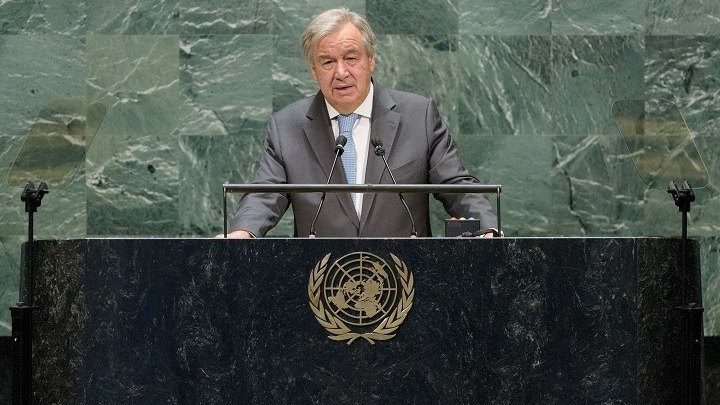 UN Secretary-General Antonio Guterres today warned the United States and China of the dangers of a new deterioration in a world that is already "on the brink" of the abyss, calling for a "dialogue" and urging them to show "understanding". the opening of the annual UN General Assembly.

"We are facing the biggest series of crises in our lives," he said. "I am afraid that our world is moving towards two different sets of economic, commercial, financial and technological rules, two divergent approaches to the development of artificial intelligence - and ultimately two different military and geopolitical strategies."

"It's a recipe for trouble. It could be much less predictable than the Cold War. "In order to restore confidence and inspire hope, we need to work together," said UN chief Joe Biden, who has chosen to go to New York despite the Covid-19 pandemic.

"We need dialogue. We need understanding. We must invest in the prevention, maintenance and consolidation of peace. We need progress on nuclear disarmament and joint efforts to fight terrorism. "We need action based on respect for human rights," Guterres said.

In an indirect reference to Myanmar, Mali, Guinea and Sudan, the UN chief expressed regret that he was watching "also the seizure of power by force". "Military coups are coming back" and "the lack of unity within the international community is not helping," he said.

"Geopolitical divisions undermine international co-operation and limit the Security Council's ability to take the necessary decisions. "At the same time, it is impossible for us to face serious economic and development challenges when the world's two largest economies disagree," he said, referring to China and the United States.

Guterres, who is in the final year of his first term as UN chief and will begin a new term in January, had already warned in 2018 (talking about Sino-US "division"), in 2019 (talking about the "big gap ”) and in 2020 (talking about a“ new Cold War ”) the danger of a bipolar world captive to Sino-American tensions.

The high-level meeting of the UN General Assembly, attended by more than a hundred heads of state and government, as well as dozens of ministers, is expected to continue until Monday.

The General Authority of Civil Aviation of Saudi Arabia, announced that it has started the full operation of the airports of the kingdom, both for the international and ...
Read more
IT HAPPENS IN ATHENS

The 4th Municipal community in the area of ​​Kolonos was today at the center of the cleaning and disinfection operation by competent teams of the Municipality of Athens, in ...
Read more
News Bulletin Athens 9.84

A net benefit of more than 4,5 billion euros will emerge in the next eight years from the electrical interconnections of Crete, the Dodecanese and the islands ...
Read more
984

The man who was arrested after the stabbing to death of the British MP David Ames on Friday, had made an appointment to see the MP, ...
Read more