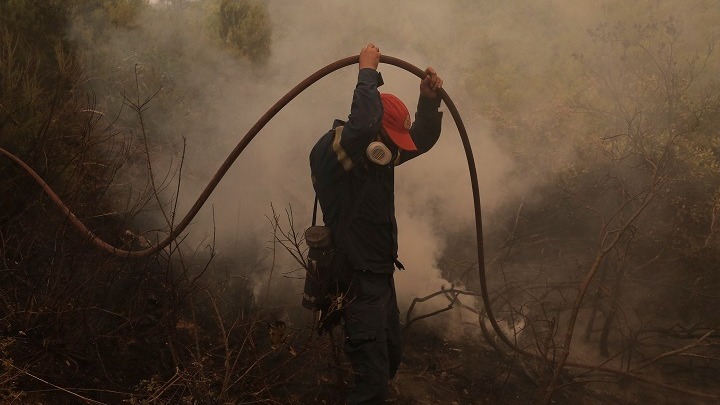 A better picture is presented, according to the Fire Brigade, of the fire that started in two different outbreaks in Nea Makri and seriously threatened houses in the settlement of Livisi, as there is no front but nevertheless all its fire services have been put on general alert. Attica by order of the Chief of the Fire Brigade, Lieutenant General Stefanos Kolokouris.

According to the latest information, the strong firefighting forces operating in the area are facing many small and different outbreaks of fire, while no damage has been reported to any of the houses in the settlement.

112 firefighters with 36 vehicles, 5 groups of pedestrians, the Motorized Special Department of Firefighting Operations (METPE) are attempting to extinguish the fire, while volunteers and water carriers of Local Government Organizations (OTA) are providing assistance.

Part of the fire brigade is lined up above the settlement, in order not to spread the fire to the mountain, while the police have closed several roads in the area.

Message from 112 with the following text at approximately 00.30

If you are in the area of ​​Lovisi and Agia Marina, stay alert and follow the instructions of the authorities. Forest fire in your area.

Both firefighters and local officials spoke of "serious suspicions of arson", stressing that it was not normal for multiple fire fronts to break out in different places.

The flames reached the yards of the houses on Terpsichoris, Dimitra, Dafnis, Ermou, Anatolis and Oneiron streets, from where the residents were asked to leave to Nea Makri square. At 12:30 after midnight a message was sent from 112 to the residents of the settlements of Livisi and Agia Marina.

A fire broke out near the holy monastery of Agios Ephraim, however it was quickly contained and did not endanger the monastery.

By order of the commander, Lt. General Stefanos Kolokouris goes to the scene of the fire.

By order of the Commander of the Armed Forces, Lieutenant General Stefanos Kolokouris, a unit of the IAEA goes to Nea Makri, Attica, to investigate the causes of the fire.