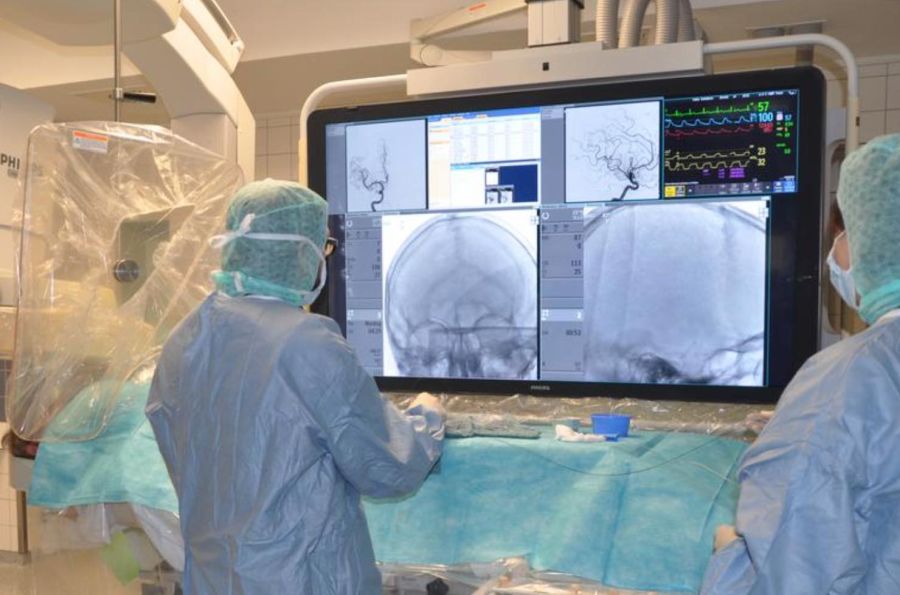 A 62-year-old patient was saved from a severe stroke, thanks to a pioneering method, which was applied for the first time at Aretaio University Hospital.

The operation, called mechanical thrombectomy, was performed at the new, standard Center for Interventional Treatment of Vascular Strokes, which operates in collaboration with the hospitals of Aeginiteio and Alexandra.

In particular, the patient had suffered a severe vascular stroke, with impaired speech ability and complete inability to move the right side of his body. He immediately went to the University Hospital of Aeginiteio and received the appropriate treatment with the administration of intravenous thrombolysis, while the complete occlusion of the internal carotid artery was found to be the cause of the stroke.

He was immediately transferred to Aretaio University Hospital and underwent a specialized operation of mechanical thrombectomy, thanks to which the internal carotid artery was opened with complete restoration of blood flow to the brain. The absolutely successful intervention protected the patient from extensive brain damage and severe disability. His condition is progressing smoothly with significant daily improvement.

The operation was performed in the Unit of Invasive Radiology of the XNUMXst Radiology Laboratory of Aretaio, which is headed by Professor A. Hatziioannou. It was performed by a specialized and experienced medical and nursing team, headed by the associate professor and invasive neuroradiologist Mr. P. Papanagiotou, who has long experience in performing mechanical thrombectomy in stroke treatment centers.

The administration of the intravenous thrombolysis, the clinical management and the hospitalization of the patient took place in the Vascular Stroke Unit of the AD Neurological Clinic of Aeginitio, under the coordination of the professor of neurology Mr. D. Mitsikostrias, and S. Prof. The anesthesia coverage of the operation was performed by the First Anesthesiology Clinic of Aretaio.

About 35.000 Greeks have a stroke each year. Unfortunately, about 40% lose their lives within the first year and one in three is severely disabled and needs ongoing support. In fact, Greece has the most fatal strokes in the first month in Western Europe, which is due to the fact that our country does not have organized centers for dealing with strokes.

The Center for Interventional Treatment of Vascular Strokes is organized in collaboration with the University Hospitals of Aeginiteio and Aretaio and the G.N.A. Alexandra. The Center includes:

In addition, mechanical thrombectomy is the most effective treatment in the acute phase of ischemic strokes compared to all other available treatments, leading to a significant reduction in disability and an improvement in patients' quality of life. The Center has both the appropriate logistical infrastructure required internationally, as well as the specialized interdisciplinary team of physicians with extensive and international experience in both the management of patients with ischemic stroke and the performance of mechanical thrombectomy.

The President of the University Hospitals of Aeginiteio and Aretaio, Professor of Cardiology Gerasimos Siassos stated: Last week, with the coordinated effort of the experienced doctors of the center, the first patient was treated. "Knowing the state's will to set up modern vascular stroke treatment centers, we will soon be able to successfully treat many more patients."