Aris announced the acquisition of Lumor 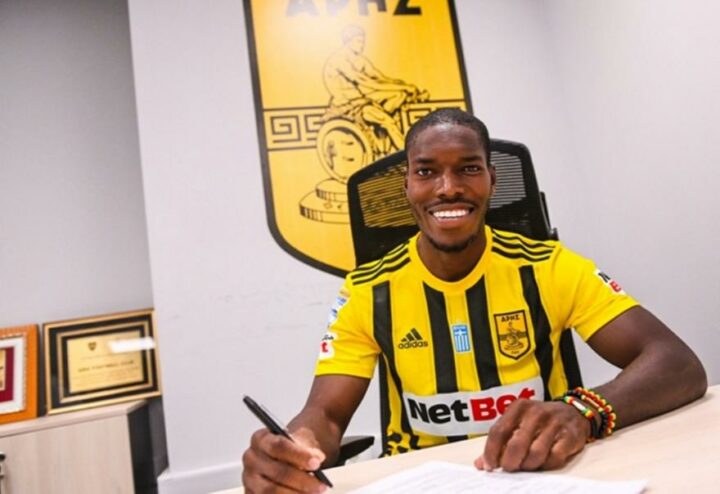 The transfer of Lumor Agbenienou for the next two years was officially announced by Aris.

PAE ARIS announces the acquisition of the international Ghanaian defender, Lumor Agbenyenu.
Lumor, at the age of 18, left his homeland to try his luck in Portugal. In Porto II and Portimonense he made excellent appearances, making his name known in European football.

After passing through Munich 1860, Sporting Lisbon decided to invest in Lumor in January 2018 (spent 2,5 million euros to acquire him) and the international Ghanaian recorded 25 appearances in the Portuguese league.

After two loan spells at Turkish Goztepe and Spanish Mallorca (23 appearances in La Liga), the 24-year-old left-back (born 15 August 1996 in Accra) is now ready for the new challenge of his career at ARIS. He has 13 appearances with the Ghana national team.

Lumor signed a 2-year contract. We welcome him to the ARIS family and wish him good luck.

After the completion of his transfer, Lumor Agbenyenu stated on the official website of our team:

"I come to one of the biggest teams in Greece, which in recent years has played a leading role in the championship. I have gathered the best information about my new team and I am very happy to be a member of this family as of today.

What I can say is that I will give everything on the field to return the trust of ARIS and all together, with hard work, to take the team even higher in the new season ".

Heating oil is 20% more expensive than last year, and it is estimated that heating oil will premiere on October 15, reaching 1,05 euros per liter ...
Read more
CIVILIZATION

The Karolos Koun Art Theater celebrates its return to theaters

The Karolos Koun Art Theater celebrates its return to theaters after a year and a half, with three premieres and a rematch from Italy ...
Read more
WORLD

The Capitol Police (USCP) in Washington announced yesterday, Wednesday, that they asked the American Pentagon to deploy soldiers of the US National Guard, so that ...
Read more
COVID-19

A cheap portable antibody test that can detect with great accuracy in just five minutes if someone has antibodies in their body ...
Read more
SPORT CITY

Rafa Nadal's uncle and longtime coach, Tony, spoke to El Pais on the occasion of the exciting US Open of the previous two weeks. THE...
Read more
WORLD

The hole in the ozone layer in the atmosphere, which is formed every year over the South Pole, has grown by 75% in September this year ...
Read more
SPORT CITY

The "battle" between Lewis Hamilton and Max Ferstappen is raging, and makes the F1 season exciting. The two pilots collided in Monza ...
Read more

The registrations for the Sports Learning Academies (tennis, athletics and self-defense) of OPANDA open on Friday 17/09/21, for children 6-15 years old, adults, and candidates ...
Read more
IT HAPPENS IN ATHENS

Municipality of Athens: Prosecutor and fine to unscrupulous contractors

A prosecutor and a fine will now await the unscrupulous contractors who dig the streets of Athens and then do not make sure it is done correctly ...
Read more
IT HAPPENS IN ATHENS

For The Love of Greece: Involving citizens in tackling the climate crisis

Two impressive murals in the center of Athens (in Panormos square and in Varvakeio), a series of digital works, videos and posters and the organization ...
Read more
IT HAPPENS IN ATHENS

Issues concerning the municipalities of the Western sector of Athens were found in the afternoon at the center of the meeting of the Prime Minister, Kyriakos Mitsotakis with the mayors of the region, ...
Read more
IT HAPPENS IN ATHENS

The crews of the Municipality of Athens proceeded with a large cleaning and restoration operation in Polygonou Square on Wednesday morning. Employees of the municipality with ...
Read more