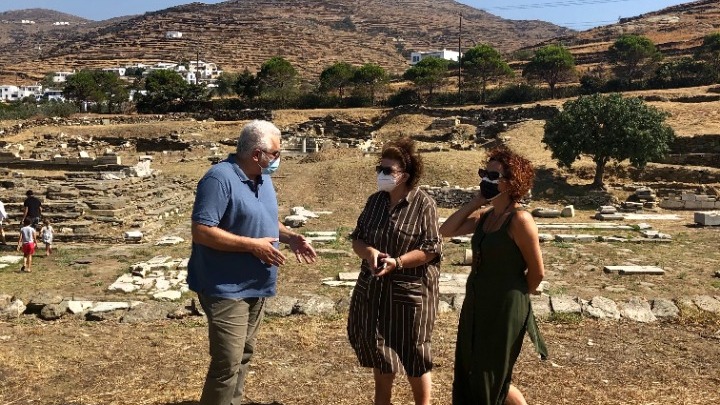 An autopsy on monuments of Tinos was carried out by the Minister of Culture and Sports Lina Mendoni, accompanied by the Superintendent of Antiquities of the Cyclades Dimitris Athanasoulis and officials of the Ministry of Culture.

The first stop is the Sanctuary of Poseidon and Amphitrite, where the Ephorate of Antiquities of the Cyclades carries out small-scale excavations, maintenance, promotion and landscaping works. At the Archaeological Museum of Tinos, Lina Mendoni met with Mayor Giannis Siotos, with whom they discussed the issue of expanding the museum to an adjacent area, which is used by the Municipality. Significant upgrading projects have recently been carried out at the museum, however the new findings, the better arrangement of the storage and study areas require new spaces. The Minister gave the relevant instructions for the elaboration - on the basis of an existing preliminary study - of a study for the extension of the building by the Ephorate of Antiquities.

Afterwards, the Minister met at the Ursuline Monastery with the Archbishop of the Catholic Church of Naxos Paros Andros, Tinos, Mykonos and Metropolitan of the All Aegean Mr. Joseph at the Ursuline Monastery - in the presence of His Holiness Nikos' predecessor. The building complex of the Monastery was founded in 1862 and is of special monumental and historical interest. For this reason and in order to protect the special character of the building and its surroundings, it was planned to introduce the issue of its designation as a monument under the provisions of Law 3028/2002 at a forthcoming meeting of the Central Council of Modern Monuments of the Ministry of Culture. As long as the complex of the Monastery is designated as a newer monument, the Ministry of Culture and Sports in collaboration with the South Aegean Region and the Catholic Archdiocese will take care of the updating of its restoration study.

A short distance from the Ursuline Monastery, the Baroque church of St. Joseph, built in 1860, today shows severe damage and collapse of parts of its roof. An autopsy of a group of engineers and conservators was planned by the competent Directorates for the Restoration of Byzantine and Post-Byzantine Monuments and the Preservation of Ancient and Modern Monuments of the Ministry of Culture, in order to launch the immediate rescue measures and the updating of the existing preliminary study.

This was followed by a visit to the School of Marble in Pyrgos, where the Minister of Culture and Sports met with the sculptor Giannis Kagiorgis and discussed the proposal submitted to the Ministry of Culture by Leonidas Halepas, for the creation of new building facilities for the Preparatory School. Panormou Tinos and reuse of its existing facilities. The meeting examined the necessary steps in order to launch the project within the prescribed schedules, as the upgrade of the School has been included in the projects of the Ministry of Culture and Sports related to Contemporary Culture and funded by the Recovery Fund.

This was followed by the autopsy of Lina Mendoni at the Museum-Home of the great Tinian sculptor Giannouli Halepa. The house of Halepa is a declared monument and is protected by the archaeological law. The museum has suffered significant damage, while newer coatings have covered sculptures of the sculptor on the walls. In collaboration with the Municipality of Tinia, the assignment of the necessary technical studies for the restoration of the building was immediately planned, while the Maintenance Directorate of the Ministry of Culture and Sports undertakes the sensitive task of cleaning the coatings. At the same time, the Ministry of Culture undertakes the support of the Municipality for the re-exhibition of the Halepa House, which houses personal objects, sculptures and drawings of the great Tinian sculptor.

The members of the Social Democratic Party (PSD), the center-right opposition in Portugal, are electing today their leader who will be an opponent of the Socialist Prime Minister Antonio ...
Read more
GREECE

P. Marinakis: It is a great honor for me the proposal of the Prime Minister to be the new secretary of ND

"Today's announcement of our prime minister, emits his overall perception of things, his overall vision for young people and ...
Read more
GREECE

V. Kikilias: With Kyriakos Mitsotakis, Greece is ready to achieve development for all

"I am sure that the excellent tourism professionals are not complacent, but are preparing according to a plan. Tourism is the locomotive of the Greek economy. It is a ...
Read more
GREECE

This morning, police officers from the Heraklion Security Sub-Directorate arrested three foreigners accused of robbery committed in an operation in Heraklion. The three arrested as ...
Read more