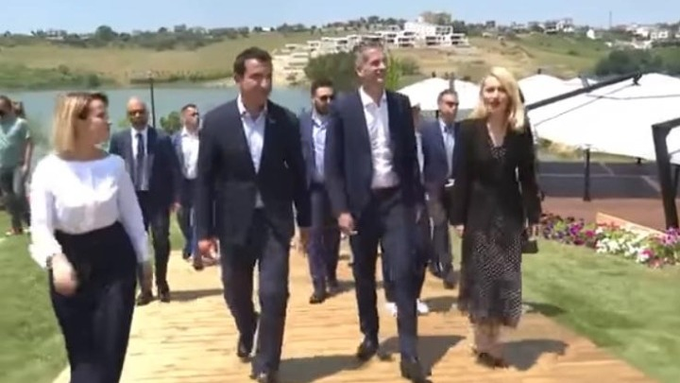 "The key to a city is not just a tool to open a door," said Mayor Veliai, "but a sign of trust, as a symbol of an open heart, an open arms, an open mind." He referred to a personal experience when in 1991, when he was just 10 years old, he was illegally in Greece and a family from Ioannina hosted him and then entrusted him with the key to her house to feel familiar with this family.

Referring to yesterday's inauguration of the Hellenic Park in Tirana, Veliai said it was a sign of a new chapter, a new breath in bilateral relations.

"Your personal history is the history of our two peoples", said Costas Bakoyannis to Mr. Veliai and called on the mayor of Tirana to move the two capitals forward together with actions on all the issues they discussed with each other and concern him. tourism, culture etc.

The Mexican Ministry of Health announced yesterday Tuesday that in the previous 24 hours 657 patients with COVID-19 succumbed and 18.911 cases of ...
Read more
COVID-19

The Turkish Ministry of Health announced yesterday Tuesday that in the previous 24 hours 126 patients with COVID-19 succumbed, increasing the number of its victims ...
Read more
GREECE

From the first moment, the Hellenic Red Cross participated with two steps in the efforts to evacuate the endangered settlements. ...
Read more