N. Hardalias: I will suggest to the Committee of Epidemiologists the suspension of Superleague 2 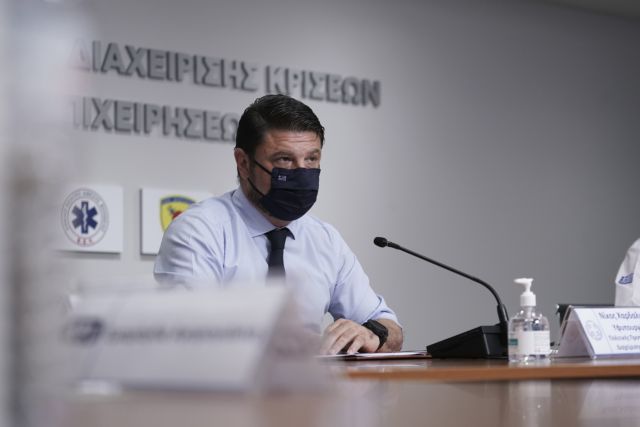 The Civil Protection responds to reports that reported violations of a health protocol in a Super League 2 match through an announcement.

Regarding the Super League 2 championship, the Civil Protection "clarifies", among other things, that it does not give any permission to hold the games, does not approve the lists of missions of the teams that move for the tournament, nor is it informed of the relevant situations, while adds that "it is therefore clear that the General Secretariat for Civil Protection is neither involved in the organization of these tournaments nor, moreover, has any control over their conduct."

Specifically, the General Secretariat for Civil Protection states: "Following the non-existent reports reproduced in recent days by Sky and Mega TV stations, as well as a portion of the print and electronic press, we would like to make the following clear:

Under current law, the Super League 2 football league is permitted, in accordance with the health protocols set by the General Secretariat of Sports.

Specifically for the Super League 2 championship, it should be clarified that the General Secretariat of Civil Protection does not give any permission to hold the games, does not approve the lists of missions of the teams that move to hold the championships, nor is it notified of the relevant situations.

The lists are approved by the security officer of the organizing Authority and are notified to the locally competent Police Directorates.

The General Secretariat for Civil Protection is informed about the program of the games, while it is notified only of the medical certificates regarding the negative PCR tests of the teams' missions.

It is therefore clear that the General Secretariat for Civil Protection is neither involved in the organization of these tournaments nor, moreover, has any control over the conduct of them ".

"The General Secretariat of Sports is solely responsible for the observance and supervision of the health protocols of Super League 2 (and any other sporting activity), while the organizing authority is solely responsible for the process of approving the movements of the teams, as explicitly provided in the relevant JMCs and provisions. Therefore, the General Secretariat for Civil Protection has no involvement in the issues for which, through anonymous reports, it is unjustly accused ", points out in a statement the Deputy Minister of Civil Protection and Crisis Management, Nikos Hardalias.

Concluding, he underlines: "In any case, and taking into account both the inability of the organizing Authority to enforce the observance of the health protocols, as well as the lack of the necessary reflexes for the punishment of those who violate them, on Monday, May 10, I personally intend to suggest to the Committee of Epidemiologists the suspension of Super League 2 championships. It is a time of responsibility towards Public Health for all those who invoke it in fragments, but find it difficult to serve it faithfully and inexorably ".

EINAP War - University doctors for the treatment of patients with COVID

The strong reaction of EINAP is caused by the decision of the university doctors, not to treat patients with coronavirus in their clinics. As the hospital patients complain ...
Read more
984

Source Devetzis: "I was a victim of sexual harassment"

Complaint - shock from Pigi Devetzis, who revealed that she was the victim of sexual harassment by a major sports player. Speaking on the show of Katerina Keinourgiou, ...
Read more
GREECE

Economou: "We were disturbed by the moves of Archbishop Elpidoforos - The Greek government expresses its dissatisfaction"

The dissatisfaction of the Greek government for the moves of the Archbishop of America, Elpidoforos, was expressed by the government representative, Giannis Oikonomou, on the occasion of the presence of Mr. ....
Read more
CIVILIZATION

A "Magic Night", a musical tribute in memory of our great Mikis Theodorakis is organized by the Attica Region in collaboration with the Municipality of Oropos, the ...
Read more
WORLD

Nobel Prize 2021: Due to the pandemic the prizes for sciences and literature will be awarded in the countries of the winners

For the second year in a row, the Nobel Prizes in Science and Literature will be awarded to the persons who will be honored with them ...
Read more
COVID-19

Vaccination certificates submitted by employees of the Papanikolaou hospital in Thessaloniki are put under the "microscope" of the prosecutor and it is being investigated whether they are false. Based on posts that ...
Read more