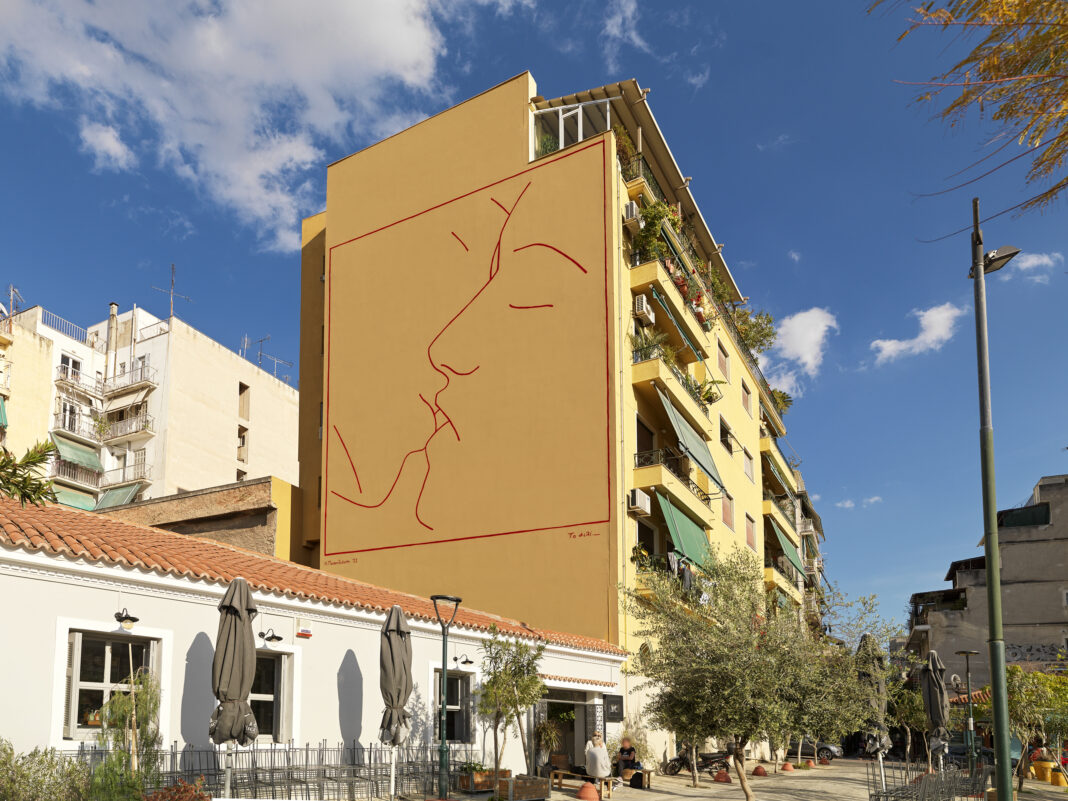 A kiss from Athens, for a city with emotions. The Onassis Foundation presents the mural "The Kiss" by Ilias Papailiakis in Avdi Square.

Athens is the core of the Onassis Foundation's activities: the combination of city and culture, the citizen as creator and the creator as citizen for a city with emotions. With a series of outdoor projects that stimulate the relationship of residents and visitors with the environment, the location, yesterday and especially today of the city, the Onassis Foundation seeks to highlight a new connection, a "coordination" with the city, referring to the concepts of wandering and meeting, joy and empathy.

The series of works OnAthens that penetrate the web of the city, regenerating on walls great works of contemporary Greek painters on a large scale, is inaugurated with the mural "The kiss" of Ilias Papailiakis in Avdi square. A deeply anthropocentric, easily understood and, at the same time, complex work, "The Kiss" (2019) is transformed into a modern mural for a modern city. Two figures and a kiss that unites the Athenians and the visitors, as an image so friendly and intimate that makes the heart of the city beat louder.

The Onassis Foundation "exhibits" from today the work of Papailiakis as a mural in Avdi square in Metaxourgio, in the center of Athens, opposite the New Municipal Gallery of Athens, in collaboration with the Organization of Culture, Sports and Youth of the Municipality of Athens (OPANDA). "The kiss" radiates life and optimism and is "embraced" by passers-by and residents today, emphasizing the value of human contact, even in times of isolation, such as the one we are going through.

The work of the internationally recognized Greek artist that adorns the wall of the apartment building on Giatrakou Street, in a dimension of 22 meters, seeks to offer aesthetic pleasure to the dense web of the city and gives all of us the opportunity to lean our gaze somewhere and express our feelings as soon as we stand in front of it.

The whole process was extremely interesting and the cooperation with the Municipality of Athens was exemplary. What particularly moved us was the positive attitude of the tenants of the building itself. Our colleague, Maria Vasariotou, in charge of production for the project, was present at the assemblies of the apartment building and lived what we most know as a "true Athenian moment".

So, we are waiting to see those who walk the streets of Athens, those who like to wander around and wander in the city, those who - when all this is over - will arrange for a drink in Metaxourgeio, to make an appointment in front of "Fili". As is the case with Rodin's "Kiss" in the Roof building. We hope some will kiss here for the first time. "

As Elias Papailiakis notes: "The work expresses a special and unique moment of two people. Love, desire, tenderness, intimacy, recognition of the other are some of the issues I deal with in a few lines. The presentation of the project in the public space, aims to strengthen the dialogue for a city suitable for the meeting and the meeting. A city with emotions. "

Elias Papailiakis was distinguished from an early age for his special painting idiom. For a suggestive painting that initially drew stimuli from art history and great painters, to compose narratives that sometimes echoed threatening premonitions. His works start from a comprehensive, linear painting, a simple approach, but which is flooded with power and emotion. His work remains distinct, whether he presents his work in solo and group exhibitions in Greece, or represents the country in events such as the 49th Venice Biennale or documenta 14.

The mural of Papailiakis is the first of a series of large-scale works commissioned and produced by the Onassis Foundation. Works that last as long as our gaze falls on them and re-establish us the city we love, a city with emotions. The city as an artist and all of us its canvas.

In collaboration with the Organization of Culture, Sports and Youth of the Municipality of Athens (OPANDA).

The work is a transfer of the painting exhibited in the solo exhibition of Ilias Papailiakis "Theoretical objects: Works 2017-2020", at the Municipal Gallery, presented by the Organization of Culture, Sports and Youth of the Municipality of Athens (OPANDA). 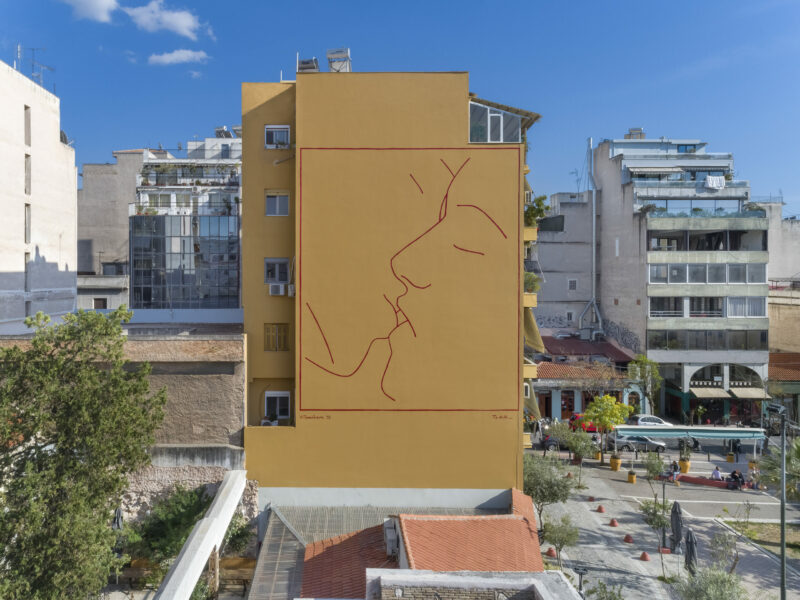 A few words about Ilias Papailiakis

He was born in Crete in 1970. He lives and works in Athens. He studied painting at the Athens School of Fine Arts (1990-1996). In 1998 he was awarded the 1st prize of the Giannis and Zois Spyropoulou Foundation. In 2001 he represented Greece at the 49th Venice Biennale. In 2001, the Macedonian Museum of Contemporary Art organized a retrospective exhibition of his works from the period 1998-2001. In 2009, the Foundation for Greek Culture (Berlin branch) organized a retrospective exhibition of his works, belonging to German collections, from the period 2005-2009. In 2013 he was nominated for the DESTE award. In 2017 he participated in documenta 14 (Kassel and Athens). In 2018 he participated in the 6th Athens Biennale, entitled ANTI. He has presented his work in more than 25 solo exhibitions in Greece and abroad. He taught at the Department of Architecture of the University of Patras as a lecturer from 2009 to 2019. In 2020, the Gallery of the Municipality of Athens hosted his exhibition, "Theoretical objects: Works 2017-2020".

A few words about UrbanAct

UrbanAct (members and collaborators) has an active presence in Greece since 1998. Its main goal is to promote the art and techniques of public murals (street art, etc.) with actions that take place mainly in public. UrbanAct implements organized programs of public murals, such as "Painting School Buildings", "Color in Hospitals" etc., mural festivals, with the participation of renowned artists, art exhibitions and publications in Greece and abroad.

The Onassis Foundation in the city

The Onassis Foundation believes in the need for public art in the daily life of the city as a trigger to recapture it and to love it even more. It is indicative that the first artistic production of the Roof was the "Art Dialogues", in 2010, when 14 new audiovisual works of contemporary artists were placed in public places of the city: in squares, sidewalks and metro stops. This action was repeated two more times, in 2012 and 2013, but it was not the only one. The Fast Forward Festival of contemporary art, from 2014 to 2019, placed its activities in public spaces of Athens, such as Pedion tou Areos, Syntagma square, Omonia square, Kotzia square and the Port of Piraeus, while it was many times trigger for walks in neighborhoods of Athens, such as Kypseli, Exarchia and Kolonos. The Onassis Foundation has also organized art exhibitions and music events "outside the walls", starting from the neighborhood of Stegi in Neos Kosmos, Dourgouti, Panteion University and EMST and proceeding to the Diplareio School in the center of Athens, at the Museum of Akro , in the Technopolis of the Municipality of Athens, in the Athens Conservatory, in the Megaron of Hypatia, in the First Cemetery of Athens, but also in the Stoa Spyromiliou, in Dionysiou Areopagitou and in the Agricultural University.

No more lockdown from tomorrow, with scientists however advising vigilance to authorities and citizens, as the epidemiological burden remains high. SMS are removed ...
Read more
COVID-19

The tourist season in Rhodes starts today with 9 flights

The tourist season for the island of Rhodes started today with expectations that things will develop better in the coming weeks, according to ...
Read more
CIVILIZATION

Museums across the country are open to the public again from Friday 14 May. The safe opening of the museums is added to the smooth operation of ...
Read more
2. A ROAD A STORY

We return to the neighborhood of Pagrati today and to Damareos Street that leads us to Kaisariani. Fir trees and other trees beautify the well-known road ...
Read more
IN 1821 IN 1 '

The presence of the Greeks in the Danube region dates back to the 15th century. Between the years 1711 and 1821 this presence is characterized by more intense action ...
Read more
3. ΕΥ ΖΗΝ

Lifestyle seems to be one of the factors that play an important role in fertility. The sedentary life and the poor diet, which ...
Read more
1. PASSPORT

She wanted to hire an executor to kill her ex-mother-in-law and make it look like an accident. the 44-year-old from Missouri ...
Read more

Athens 9.84 in collaboration with the seven communities of the Municipality of Athens are collecting medicines and sanitary material for the Social Pharmacy of the Reception Center ...
Read more
CIVILIZATION

The Minister of Culture and Sports Lina Mendoni participated this afternoon at the Delphi Economic Forum, in a discussion with the journalist George Kouvaras, ...
Read more
IT HAPPENS IN ATHENS

The beekeepers of Attica state that they are concerned with the "National Electronic Beekeeping Register", which was recently introduced, with the aim of establishing a unified digital system of recording, inventory ...
Read more
CIVILIZATION

The Museum of Cycladic Art opens with two new exhibitions

The Kotsana Museum participates "digitally" in the celebration of the International Museum Day (May 18) and invites you to enjoy the safety of your staff ...
Read more