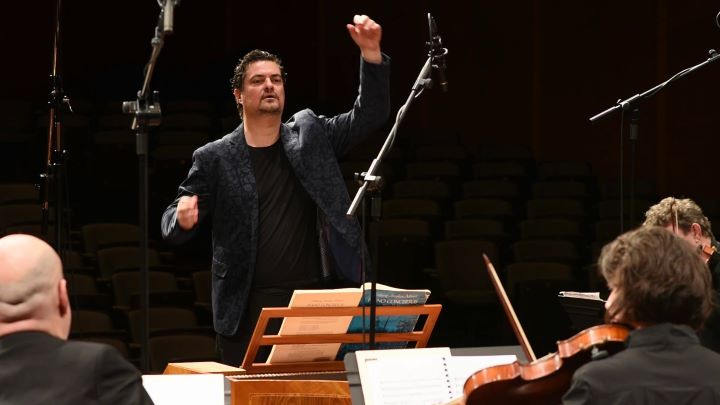 The Musicians of the Camerata-Orchestra of the Friends of Music under the internationally recognized conductor George Petrou, after their great successes abroad as Armonia Atenea and the first online broadcast of their concert sponsored by the British foundation Linbury Trust from the online platforms of the Palace, return to our screens in Saturday, January 30 at 8:30 p.m. with a program, also in first screening, entirely dedicated to Joseph Haydn in its context Megaron Online.

In this online premiere, the Musicians of the Camera-Orchestra of the Friends of Music and George Petrou turn their attention to Classicism and the "Father of Accord" Joseph Haydn, having as their main concern the approach to the sound aesthetics of the late 18th century. century through historically documented practices and the use of period instruments.

The great Austrian composer was a modern composer of his time who decisively influenced great contemporaries such as Mozart and Beethoven. Although he worked for most of his life as a court musician for the Esterházy family, he was very popular throughout Europe, especially in Great Britain.

Agreement no. 92 owes the nickname "Oxford" to the fact that Haydn allegedly conducted it at a celebratory ceremony at the historic English University when he was awarded the title of Doctor of Music in 1791. Agreement no. 94 was written the same year for a series of the composer's concerts in London.

It was called "Surprise", as its creator, who was famous for his humor, had the original idea to pleasantly surprise the audience with a musical joke: he introduced at the beginning of the second part of the project dynamic surprises for the listener's ear that excited them. everyone. 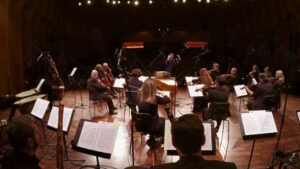 The concert of the Musicians of the Camerata – Orchestra of the Friends of Music under George Petrou is broadcast live (free of charge) from its websites MMA and ΥΥΠΟΑ. You can also watch it from Facebook of the Palace.

It will be available on all platforms for 48 hours.

Next month, two new streamings are scheduled by the Orchestra

Baroque works in first online projection, always in period instruments. On February 13, the broadcast includes a concerto for Antonio Vivaldi Strings and is a production of the Athens Concert Hall, while the concert, which airs on February 24, is dedicated to Georg Friedrich Händel, sponsored by the Linbury Trust and co-produced by MMA and of Camerata Musicians.

The Musicians of the Camerata-Orchestra of the Friends of Music

They are today one of the most active carriers of modern Greek culture. The diverse and rich activity of the ensemble as well as its fame inside and outside Greece place it not only among the most important pillars of the artistic life of our country, but make it stand out as perhaps the most distinguished ambassador of Greek music production abroad.

The Musicians of Kamerata, since 2009, under the artistic direction of George Petros, specialized in the historical practices of interpretation with instruments of the time. Since then, the Orchestra has managed in a short time to gain its own place among the most recognized respective ensembles in the world.

International critique characterizes her interpretations under G. Petrou as reference performances in the repertoire of the 18th century. and even in the music of GF Händel. At the same time, the Orchestra develops a very wide activity that includes both 19th and 20th century symphonic music, as well as musical theater productions (opera, operetta, musical), many of which have been presented abroad.

During his current artistic career, he has performed at the Theater an der Wien in Austria, at the Concertgebouw in the Netherlands, at the Bayreuth Baroque Opera Festival in Germany, at the Teatro Real in Spain, and at the Martina Franca Opera Festival in Italy. . The Orchestra regularly gives concerts at the Athens Concert Hall, while collaborating with important cultural organizations in Greece. In addition, sponsored by the British Linbury Trust, it presents a series of four recorded concerts online in co-production with MMA.

The Camerata Musicians make frequent appearances in the biggest halls and in the most important festivals in Europe. At the same time, the Orchestra records for the most important international record companies (Deutsche Grammophon, DECCA, MDG, Sony).

Apple has stated its opposition to the announcement of the European Commission, which decided to pass legislation to impose a single common charger for all ...
Read more
COVID-19

"To intensify our efforts to expand access to safe and effective vaccines everywhere", asked the Prime Minister Kyriakos Mitsotakis in a message that ...
Read more
GREECE

SYRIZA: The sudden decision to privatize PPC is a crime against the Greek people

In a statement, SYRIZA criticized the government for the privatization of PPC, calling it a "crime against the Greek people." Specifically, the announcement states: "The ...
Read more
News Bulletin Athens 9.84

"To intensify our efforts to expand access to safe and effective vaccines everywhere", asked the Prime Minister Kyriakos Mitsotakis in a message that ...
Read more
GREECE

The strategic partnership between Greece and Israel, as well as the importance of the tripartite format of Greece-Israel-Cyprus cooperation, was at the center of the meeting ...
Read more
COVID-19

The European Union drug regulator announced today that in early October it will or will not give its approval for the granting of a ...
Read more