K. Mitsotakis: We have put a lot of pressure on companies to honor vaccine contracts 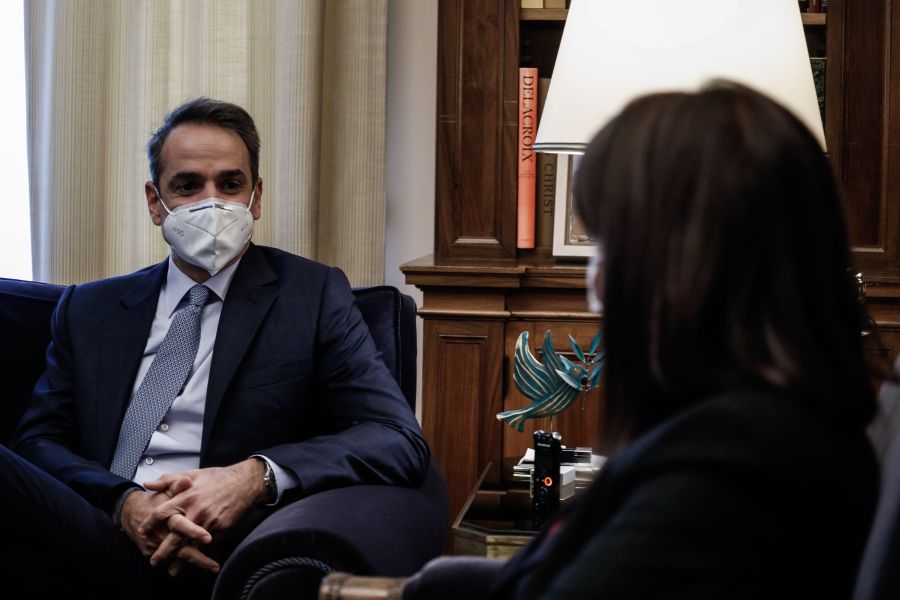 Increased attention after the opening of the market, recommended the Prime Minister, Kyriakos Mitsotakis during the conversation he had on Tuesday afternoon at the Presidential Palace with the President of the Republic, Katerina Sakellaropoulou, who stressed that "we must remain vigilant because the virus is a constant and active threat. "

Mr Mitsotakis described the fact that we currently have some of the best epidemiological data in Europe as "extremely encouraging", but warned that "this could change very quickly" and "therefore requires increased attention", as well as "constant weekly analysis by epidemiologists of the effects of gradual relaxation, which has already begun ".

At the same time, he underlined that "the vaccination process is progressing very satisfactorily". "Yesterday, we vaccinated almost 20.000 of our fellow citizens. "Today, at the latest tomorrow, I estimate that we will reach 200.000 vaccinations and of course, as I have said many times, we could do much more, but we are completely dependent on the number of vaccines we receive in the context of European procurement procedures." , noting that "we have put a lot of pressure on companies to honor the contracts they have signed with the European Union."

Referring to the opening of the market, the Prime Minister underlined that "despite the crowded images we saw, I believe that to a great extent there was compliance from both citizens and professionals, which makes us feel quite confident that we will not have additional problems".

However, on the occasion of the opening of high schools and lyceums, he warned that "all this increases overall mobility, and therefore the chances of transmitting the virus."

"If you add to that the fact that scientists are justifiably concerned about new mutations that seem to have increased transmissibility, this forces us to be very careful, to study every step very carefully and to leave time from one step to the next. next to assess the effects on the epidemiological picture of the country ", he added.

Mr. Mitsotakis also estimated that "we will have another vaccine which I believe will be approved by the European Medicines Agency and will be added to the vaccine quiver", while describing our strategy "to preserve the second dose" as "very correct". so that we can be absolutely sure that those who will be vaccinated will be able to make the second dose within the time limits for which the vaccines have been approved ".

"Other European countries have chosen a different strategy and as they do not have vaccines at the moment, because there were some delays, they are facing a problem in this process. The vaccine, according to experts, protects when both doses have been given. "We do not know its effectiveness when a single dose has been taken, which is why we insist very much on adhering to the schedule," he noted.

K. Sakellaropoulou: Immunity is our only defense

The President of the Republic, Katerina Sakellaropoulou stressed that the data so far show that our country is comparatively in a much better situation than most European countries, however we must remain vigilant because the virus is a constant and active threat.

"It is really necessary, as you said, for the gradual opening of the economy and schools to be done with the greatest responsibility, the one we have shown so far. It is very important that we continue in the same way in order to win this bet for the good of the whole society ", he pointed out

Referring to the arrival of our elderly compatriots to be vaccinated, Ms. Sakellaropoulou stressed that "they teach a lesson of humanity and responsibility to all and I hope that their example will be followed by all our fellow citizens, even those who still deny the need for it." vaccination ".

"I hope that the difficulties in delivering the vaccines will be temporary, so that we, together with the whole of Europe, can achieve the immunity of the community in the coming months. "As it seems, it is our only defense against the pandemic at the moment", added the President of the Republic.

"Athens 9.84" in the context of events, actions and public dialogue on the events of the times, hosts articles by ambassadors from countries which had ...
Read more
CIVILIZATION

Miguel Antones: The winner of the award in memory of Dimitris Eipidis at the Berlinale Talents

Miguel Antones Ramos and the Dragons project won the award in memory of Dimitris Eipidis as announced on Thursday, March 4 in the context of ...
Read more
GREECE

The Lamia Judicial Council is meeting for the second request of D. Koufontina

The Judicial Council of Lamia is expected to meet later in the day to rule on the second request of Dimitris Koufontinas regarding ...
Read more
News Bulletin Athens 9.84

The Greek economy moved better than the estimates of both the government and the institutions in 2020. According to the data of ELSTAT, the ...
Read more
GREECE

The National Medicines Agency (EOF) has decided to ban the distribution and distribution of the product "Skinceptica alcoholic hand gel 70% alcohol", because it is available as a biocidal product, without ...
Read more
984

The areas affected by the Egelados are in a state of emergency - On Monday the conclusion of the seismologists for the 5,9 Richter earthquake

The data for the recession last year were better than expected, as the decrease in GDP amounted to 8,2%, with the Gross Domestic Product to ...
Read more