Accelerate the procedures for arbitrary demolition 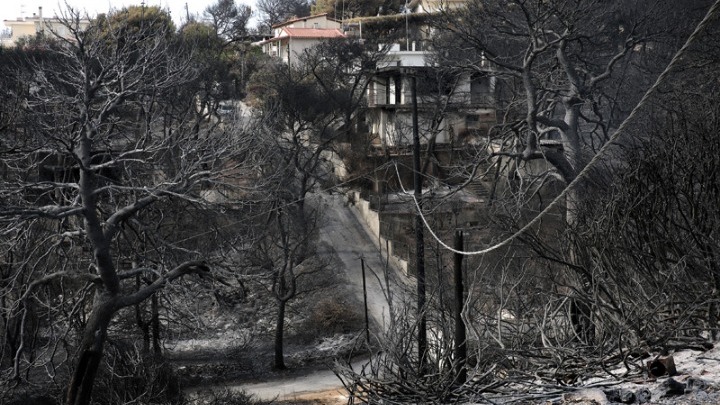 The amendment for arbitrary demolition of coastal and forest areas was submitted to the Parliament.

The possibility of direct state intervention in the demolition of arbitrary buildings and structures located in protected areas at high risk of natural disasters is given by an amendment of the Ministry of Environment submitted to Parliament.

The amendment, which was announced in the interview of the co-responsible ministers at noon, allows the demolition of arbitrary fences, in a zone 500 meters wide from the shoreline, which prevents unimpeded access to the coast, as well as arbitrary buildings in forest areas due to fire and have been declared reforestable. Arbitrary demolition is also allowed in areas that are included in streams and are in a Potential Risk Zone and dilapidated buildings. The cost of demolition will reach one million for this year and 5 million annually. There is also a provision for the demolition of the arbitrary in Makronisos, with the relevant cost reaching 200 thousand euros. It should be noted that during the demolition deed it is possible to file an application for cancellation at the SC.

Earlier in the day, Development Minister George Stathakis unveiled the amendment on arbitrary construction, along with Interior Minister Panos Skourletis and Deputy Environment Minister Socrates Famellos, and announced a package of measures to immediately proceed with the demolition of 2.500 buildings in forested areas and forests. .

According to the amendment, the treatment of arbitrary construction is undertaken by the building inspectors together with the arbitrary observatory. The two services will record the arbitrary based on the data that the municipalities have and will proceed with the demolition process together with the decentralized administration. In order to speed up the process, citizens are losing the right to object, as citizens will now be able to save their property from bulldozers by appealing only to the SC within 15 days, from the day they are notified that it is arbitrary.

According to the three ministers, 5 million euros are released from the green fund for demolition, which will be carried out by the decentralized administrations with the status of direct assignment to the contractors, in order to save time, if there were competitions for the nomination of the contractor.

It is recalled that yesterday, Tuesday, the Minister of Justice, Stavros Kontonis, ordered the Prosecutor's Office to investigate, in the context of the preliminary investigation, whether the provisions of the law for citizens' access to the beaches had been observed.

The first lawsuit of the relatives of two victims of the deadly fire was filed today, Wednesday, at the Prosecutor's Office. In the meantime, for two hours, the regional councilor testified to the Prosecutor conducting the preliminary investigation into the fires. Ioanna Tsoupra. "I was told that the fire was directed at Dioni," he said. The latter never happened. "

"Clearly there are political issues," he told "Athens 9.84" ο Petros Filippou Deputy Regional Governor of Eastern Attica. "There was no evacuation document. Who could do it in seconds? We are talking about a basically verbal coordination. The fire spread quickly. "

Fire victims can call the telephone number 210 62 47 000 for issues of the Ministry of Infrastructure, for issues of restoration of their homes and for tax issues. On line 1555 they can call for insurance arrangements and benefits.

At the same time o Municipality of Athens has started a program to support the victims with special scales consisting of psychologists and social workers while the DSA provides legal assistance to promote applications. Amendment also provides unemployment benefit to workers who were found unemployed after the destruction of the companies where they worked.

In Rafina The distribution of basic necessities continues, where children from the Hellenic Guiding Corps assist in the transportation and classification of the items, while food is available to beneficiaries based on social criteria. At the same time, the process for help ranging from 5.000 to 8.000 euros as well as for the emergency aid 586,94 euros offered by the municipality.

The damage restoration works at the Agios Andreas Health Loss Rehabilitation Center continue at an intensive pace, as announced by the General Staff.
The General Staff estimates that the next holiday series, the start of which is scheduled for August 9, will operate at 1/3 of the center's capacity, with a gradual increase, depending on the course of repairing the damage that has been planned.
The GES clarifies that a proportional distribution will be observed, in all categories of beneficiaries.
The following are currently being executed at KAAY:
* Works by 7 technical workshops to repair the damage to its facilities
* Restoration works by HEDNO of the electricity network of the Management Battalion of KAAY, the operation of which ensures the smooth operation of the entire Center. Its needs are temporarily covered by the operation of a generating pair (E / Z).

In the immediate restoration of damages suffered by the Lyreion Children's Foundation, "Motor Oil Refineries Corinth SA" proceeds, in consultation with the Board of Directors of the Foundation. The company will undertake the reconstruction of buildings destroyed by the fire, such as the children's hostel, the reception and boarding house, the accounting and social welfare building, as well as the food warehouse. It will also replace damaged vehicles, which are required to meet the transportation needs of the children of the Foundation, while it will also contribute to the regeneration of the outdoor space of the Foundation.

The Hellenic Community of Alexandria expresses its will to stand by the orphans of the Lyrian Children's Institution of the fire-stricken Eastern Attica, handed over to them, and to host them in the City of Alexander the Great.

In particular, the President of the Presbyterian Community, Edmondos Kasimatis, contacted the Undersecretary of State for Hellenes Abroad, Terence Quick, and conveyed his intention to propose to the Alexandria Community Commission to host children from Alexandria in Alexandria. As many children and for as long as needed.

A wave of solidarity from Germany

There is a big wave of solidarity for the fire victims of Attica. At the political level, at the level of Greek communities, associations, but also the Church, basic necessities and money are collected, as reported by German wave.

A press release issued by Badum and Roth states, among other things, that "the consequences of the violent catastrophic fire that killed at least 86 people and left many homeless, have shocked us." Many Greek women and men are faced with debris […]. What is needed now is a message of intra-European solidarity. Specific, non-bureaucratic help is needed for Greece, and of course especially for the people of Kineta, Rafina and Mati, which has been destroyed by 98% ". It is worth noting that the 35-year-old Bandum also has special personal ties with Greece since she spent part of her student years in Thessaloniki and even speaks Greek.

However, the Greeks of Germany also show their practical solidarity. Through the Greek Communities and the Church they collect donations that have already been sent or will be sent in the coming days to Greece. For the relief of the victims, the Federation of Greek Communities calls on the communities to contribute financially to the account of the Greek Red Cross.

The Network of Greek Bodies in North Rhine-Westphalia invites donations to the Lyreion Children's Institution, while the response was huge in Munich, where the Greek element is particularly strong and where the initiative was taken by two parishes (St. George and St. Panton) and 9 bodies-associations of the city. The Association of Greek Doctors in Munich has opened a special bank account to raise money in the Bavarian capital.

The Cyprus issue, the situation in the Eastern Mediterranean and immigration were among other things at the center of the meeting of Prime Minister Kyriakos Mitsotakis with Secretary General ...
Read more
GREECE

The 4th Thessaloniki Street Food Festival is coming in October

The biggest celebration of Street Food and music in Thessaloniki, the Thessaloniki Street Food Festival is coming again this year for 4 days, from Thursday 7 ...
Read more