Accessibility project for people with visual disabilities at the Kazantzakis Museum 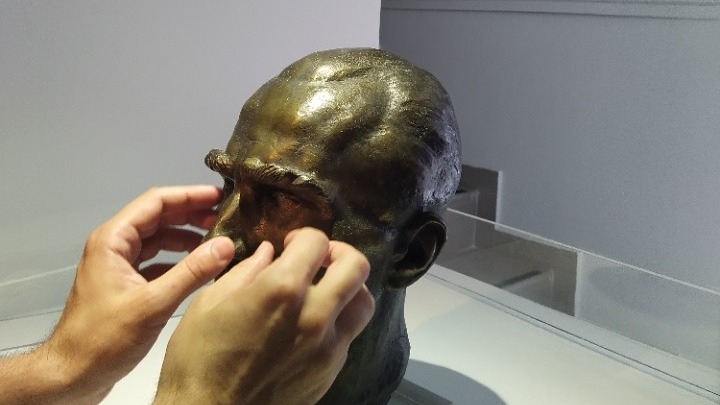 With the vision to systematize its practices and actions in the direction of lifting social exclusion and to raise public awareness on issues of accessibility of people with disabilities in culture and art, the Museum "N. Kazantzaki" in Myrtia, Heraklion with funding Ministry of Culture, is in the implementation of a project that will make the exhibition of evidence from the life and work of Nikos Kazantzakis accessible to people with visual disabilities.

The project, according to the Chairman of the Board of the Museum Michalis Taroudakis, was proposed to the Ministry of Culture after it was found that despite the rapid technological development, a very small percentage of museum items are available to people with partial or total vision loss.

"Through the work that is being implemented at the moment, the Museum seeks to enable people with visual disabilities to visit the Museum and tour its exhibits, having the opportunity to approach them in a way that allows them to be identified and captured. messages they emit. In this way, they will become part of the Kazantzak project, in the most complete way possible and they will realize that they also become equal recipients of cultural goods ", said Mr. Taroudakis to APE-MPE.

Regarding the tour of the Museum's exhibits, as explained by the Chairman of the Board, a tactile route is planned within the Permanent Exhibition of the Museum, which provides embossed maps for navigation, making life-size copies for increase the experience through touch, talking books and audio descriptions, and finally, selected informative texts, anthology of texts by the author and special marking in capital letters and Braille code, in Greek and English. "In this way, it is expected to improve the access to the writing work of Nikos Kazantzakis, which is, after all, the main mission of the Museum and the acquisition of substantial museum and educational experience for the visually impaired. However, the planning will be done with the aim of benefiting wider groups that have other difficulties in reading ", added Mr. Taroudakis.

In order to be able to perform their work actively and effectively, the staff of the Museum attended a personalized seminar by members of the Lighthouse of the Blind of Greece, to familiarize him with this disability, but also his training in behavior and communication, as well as escort techniques and / or guided tours for visually impaired people.

A first "taste" of how these opportunities will be provided at the N. Kazantzakis Museum was given to those who attended the performance given on Saturday, October 30, 2021 at the Experimental Stage of the Cultural Center of Heraklion with the support of the Region of Crete, aimed to raise public awareness in matters of accessibility of people with disabilities in culture and art, while it was part of the general strategy of the Museum.

"By 'universally accessible' today we mean a show, which can be watched by people with visual impairments as well as people with total or partial hearing loss. Thus, during the performance, subtitles were shown with the texts of the dialogues but also a description of the musicians or other types of sounds, there was interpretation in the sign language of all the dialogues of the play and a description through headphones of the actors on stage. Thus, the project could be watched by people with visual and hearing impairments at the same time as the rest of the audience ", said Mr. Taroudakis to APE-MPE.

In the implementation of the universally accessible performance, its services were provided by the Liminal Group, while the coordination by the Museum was provided by the museum educator Vicky Christakis.

"With the play 'Office and Lily', the Kazantzakis Museum tried to convey the message that nothing is self-evident and nothing is impossible when there is a will for all members of a social group to enter under the same embrace," added its president. "N. Kazantzakis" Museum.

The project that is being implemented is coordinated by the Museum on the side of Vangelis Charitopoulos under the guidance of the indefatigable director of the Museum, Barbara Tsaka.