The last goodbye to Fofi Gennimata 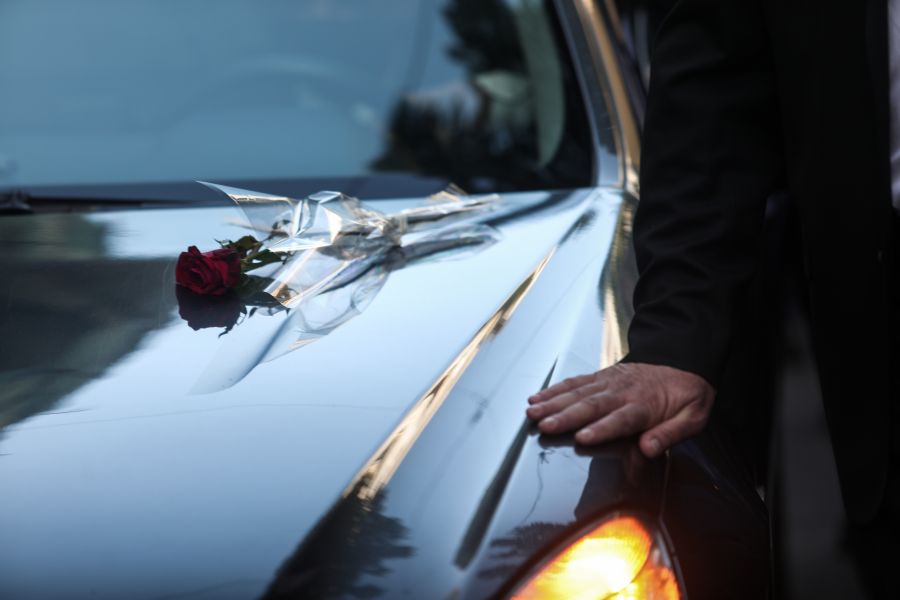 In her last home, in the First Cemetery, in the same place where her father was buried, rests the president of KINAL, Fofi Gennimata, who passed away on Monday, defeated by the cancer he had been "fighting" since 2008.

Η Exodus service was held at the Diocese of Athens, officiated by Archbishop Ieronymos and immediately after the procession started in the direction of the First Cemetery. 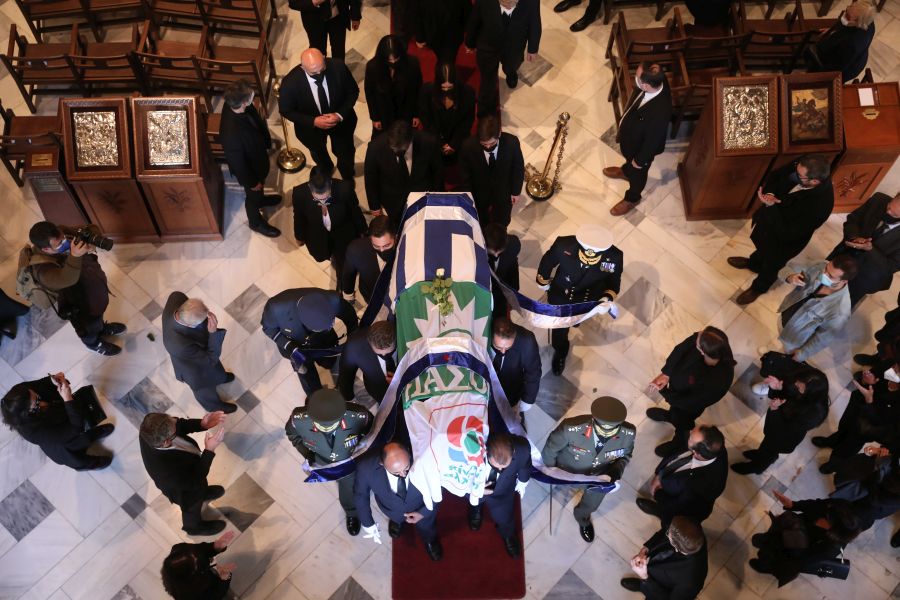 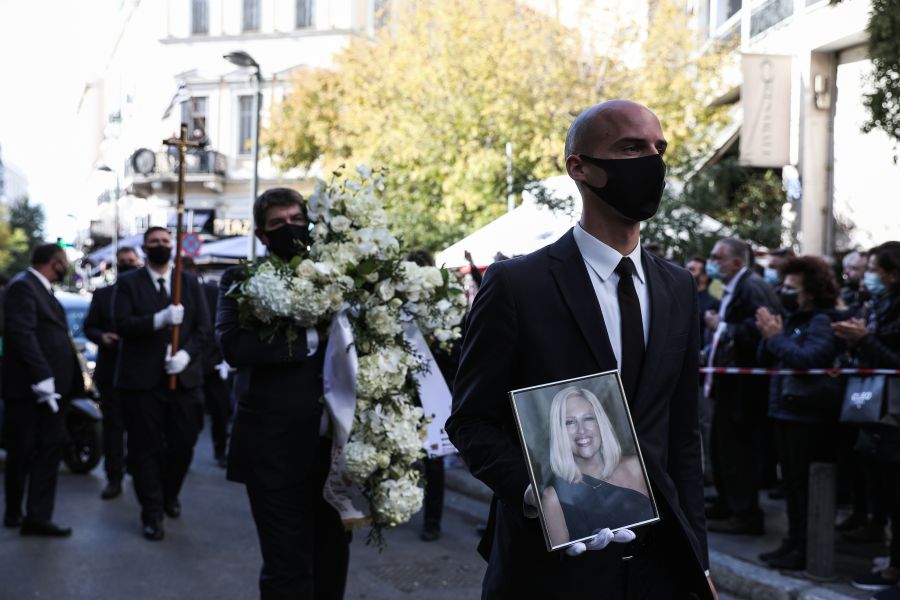 Thousands of people applauded and shouted "Immortal" accompanied the funeral procession, which, passing in front of the Parliament, made a short stop on Amalias Avenue. 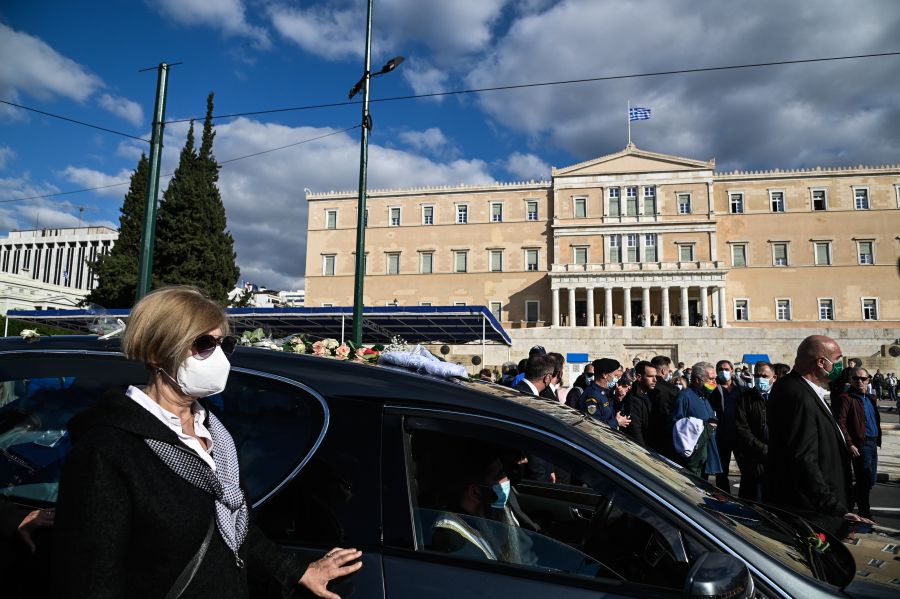 Fofi Gennimata was buried as energy minister and in all public buildings the flags are flying at half-mast, while the same happens in the country's embassies around the world as a tribute to the late politician. 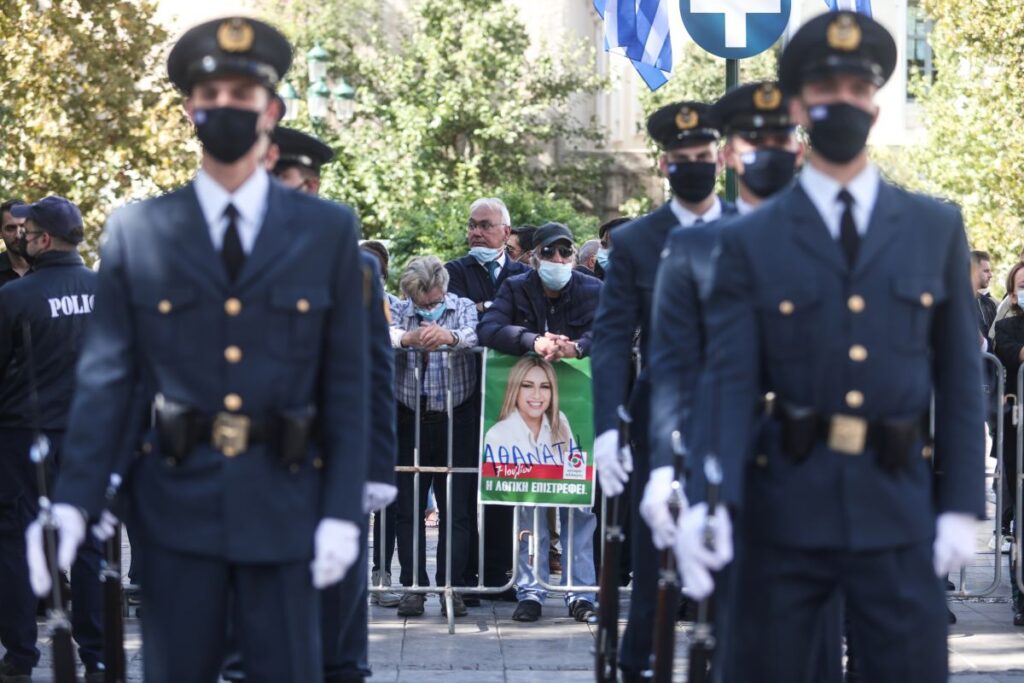 A special moment is the farewell from her children. "You left a fighter. You will always be with us. We will follow what you taught us "said George, Katerina and Emilia at the funeral.

"You gave all the battles as a lad, you were a fighter for life. You faced the danger with your fancy smile, showing your capacity and will for life. "You thus became a model for many people", stressed her son, George.

As Ms. Sakellaropoulou stressed, "Saying goodbye to Fofi Gennimata today, we are not just saying goodbye to a woman politician who was distinguished for her democratic ethos, honesty and efficiency. We are not just saying goodbye to a woman who faced the cruel illness with vigor and sincerity. We say goodbye to a model of optimism and discretion, a man of innate kindness who distinguished and guarded the boundaries between the public and the private, knowing, however, when the individual experience is worth sharing to support others with its truth. The passion with which Fofi Gennimata supported the improvement of public health structures is the practical expression of this attitude of life ".

At the same time, he underlined that "The pandemic sadness for its premature end shows how inspiring and guiding this attitude was. Direct in her contact with the citizens, humane, militant and dignified, moderate and consensual, she maintained her faith in life until the last hour. She did not lay down her arms, did not withdraw from the political scene, tried, and succeeded, in combining her personal struggle with the small and big battles in the political arena. To fight fear, discouragement, resignation. And to justify, with the utmost consistency, the multiple roles he had shoulder to shoulder with so much power. Dedicated mother, husband, politician. And lovable companion, colleague, friend ".

He also pointed out that Fofi Gennimata was always close to those in need, regardless of gender, origin or other discrimination. "Especially women. Speak boldly about the stereotypes that fix them, the difficulties they face. He had a deep understanding that the forces that perpetuate gender inequalities are multiple, interconnected, interdependent. He did not enter politics on the basis of rivalry, but of cooperation and dialogue. It was not always easy. But Fofi Gennimata managed to overcome divisive perceptions, condemning them whenever she saw them emerge, always with kindness and dignity. That is why she gained the respect of her party, in the Parliament, in the society ", he added.

Referring to the brave battle she fought with her chronic illness, she claimed that "Cancer was a constant, threatening presence for Fofi Gennimata. An apathetic and unmoving stranger, from her early youth, when very early, she lost both her parents, until the time of her own diagnosis, until her own end ".

However, he stressed that "Until the last moment, Fofi Gennimata remained militant. He crossed the enemy territory of the disease with admirable courage. He did not give in to the temptation to become self-centered or self-referential, he did not leave any crack through which the pity of others could penetrate. In the betrayal of the body and the fear of death, Fofi countered the mental rum, the priceless action ".

Addressing all those who knew firsthand her smiling generosity, tenderness and strength, to her husband, to her three children who were so proud and loved, she wished to find in her great legacy consolation for the unbearable loss they are experiencing and ended saying that "All of us who say goodbye today will always remember her as a model of integrity and bravery. Because Fofi Gennimata made the fear of death the beauty of life. Through pain, he gained fullness. Have a good trip! "

"She faced her ordeal in an exemplary way," said Parliament Speaker Konstantinos Tassoulas, adding that "she had a kind stubbornness in what persecuted her, this stubbornness made her a good husband, a worthy mother and a great politician."

The Speaker of Parliament added that "the fate of every human being deserves and can become unique. And this element in Fofi Gennimata, the dignity and the example she set, is what keeps the whole society excited, it is what keeps the country in national mourning and all of us, united, to speak sadly about its honesty and example ".

"You charted your own course in political history and showed everyone what true dignity will say," said KINAL secretary Manolis Christodoulakis, stressing that "you believed in young people, you trusted us. "Where others saw walls, you opened the way for us." "You resurrected a party, united its pieces when it seemed impossible," he said, adding: "President, our party is saying goodbye. It was our honor, it was my honor. " 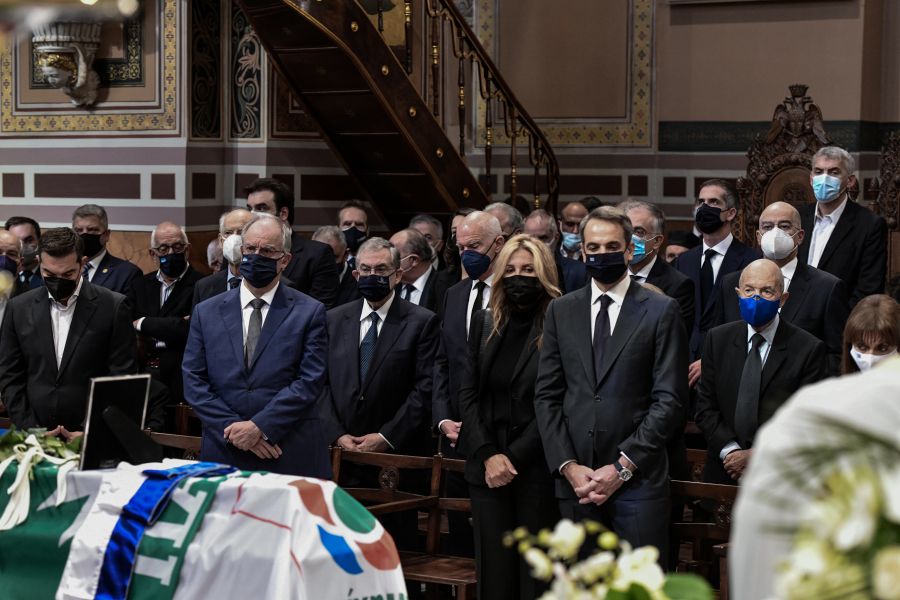 The President of the Republic, Katerina Sakellaropoulou, the Prime Minister Kyriakos Mitsotakis, accompanied by his wife Mareva, the leader of the official opposition, Alexis Tsipras, were present at the last "goodbye" in Fofi Gennimata, in the Diocese of Athens. Dimitris Koutsoumbas, the head of MeRA25, Giannis Varoufakis, A / GEETHA Konstantinos Floros.

Present were members and executives of the government, we distinguished N. Dendias, C. Staikouras, T. Theodorikakos, the Speaker of Parliament, K. Tassoulas, the mayor of Athens, Costas Bakogiannis, the Parliamentary Group and the MEPs of KINAL. 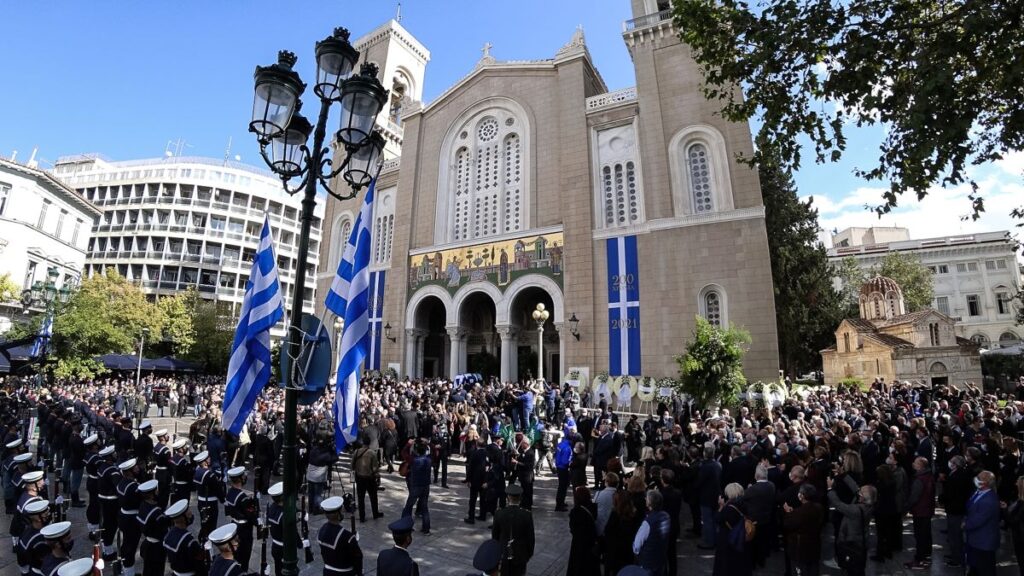 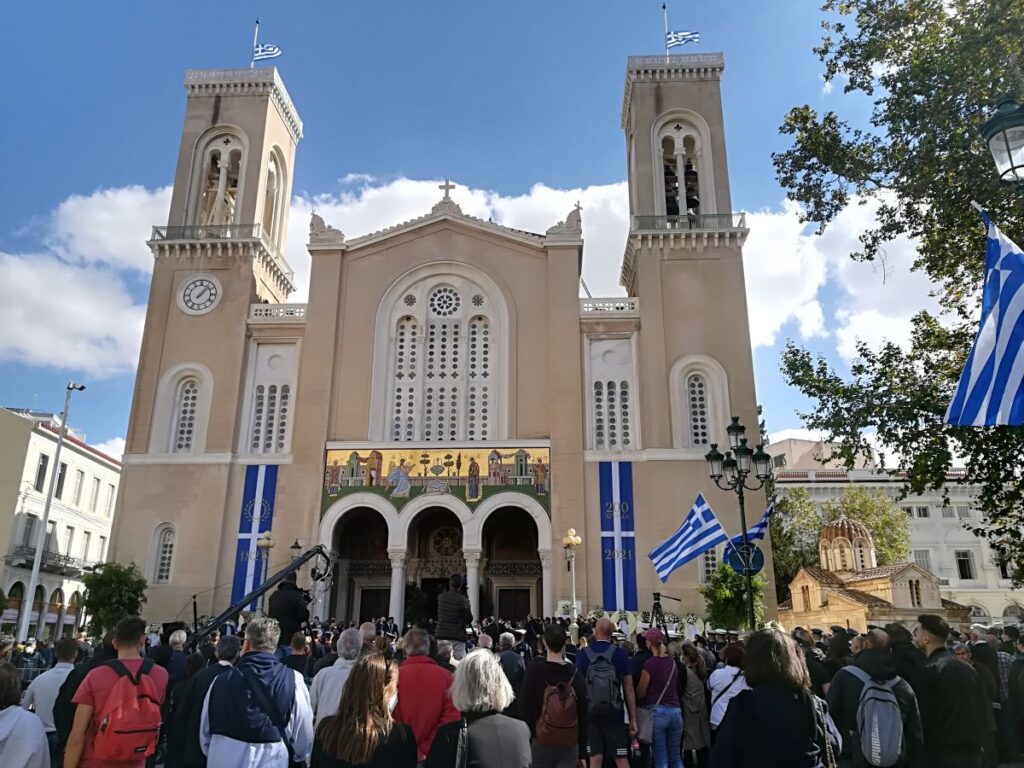 Fofi Gennimata was buried in the First Cemetery where the Municipality of Athens, as announced by the mayor Costas Bakogiannis, granted the same place where her father, George Gennimatas, was buried.

As it is known, the family of Fofi Gennimata had asked instead of wreaths to strengthen the Child's Smile and the Ark of the World with donations.

Newsroom Athens 9.84 with information from ΑΠΕ-ΜΠΕ

The Federal Ministry of Health of India announced today Thursday that in the previous 24 hours 9.419 cases of SARS-CoV-2 were confirmed and 159 patients succumbed due to ...
Read more
GREECE

Under the influence of drunkenness, a 60-year-old local boat commander was arrested last night by officials of the Port Authority of Poros. According to the port body, the 60-year-old ...
Read more
COVID-19

Botswana: 25 cases of Omicron variant of new coronavirus have reached

The Minister of Health of Botswana announced yesterday Wednesday that as of this stage, 25 cases of the Omicron variant have been identified in the African country ...
Read more
WORLD

The Ministry of Health of Vietnam announced yesterday Wednesday that in the previous 24 hours 14.599 infections from SARS-CoV-2 were confirmed, with a total of ...
Read more
WORLD

The US Senate on Wednesday opposed the mandatory vaccination against COVID-19 imposed by President Joe Biden, an initiative of the Republican camp that ...
Read more