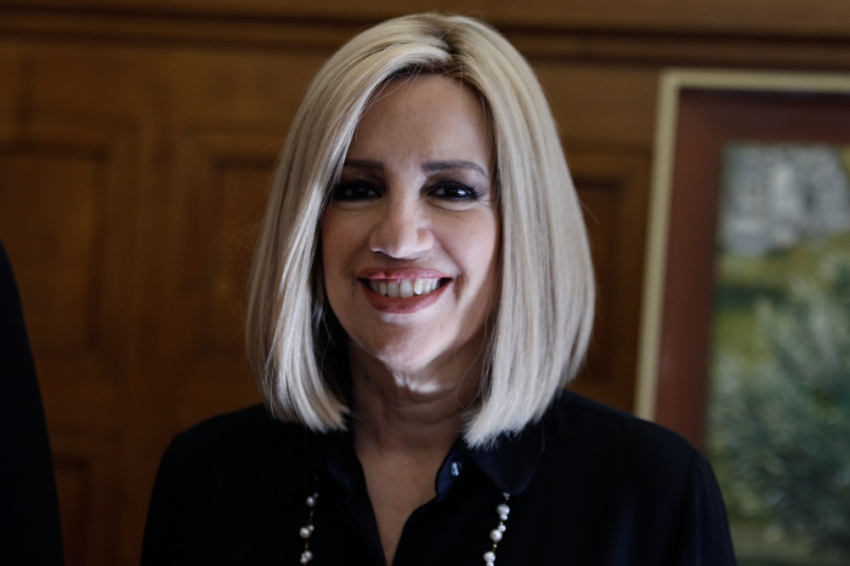 The flag is waving in the Parliament, while with a decision of the Prime Minister Kyriakos Mitsotakis on Wednesday, October 27, 2021, the day of the funeral of Fofi Gennimata, a national mourning is declared.

The funeral of the president of the Movement for Change will take place on Wednesday in the Diocese of Athens. Her body will be exposed in a popular pilgrimage from 10 in the morning and at 14:00 the exit procession will take place. Her burial will take place in the First Cemetery of Athens, at public expense and with the honors of an acting minister.

Fofi Gennimata "left" yesterday at 12:04 noon at the age of 56 after a battle with cancer at Evangelismos Hospital, where she had been hospitalized since October 12 and after a relapse of her underlying disease. Her death caused a huge wave of grief not only in the country's political world

The announcement of the "Evangelismos" hospital

"Today 25/10/2021 at 12:04 p.m. at Evangelismos Hospital, the president of KINAL Fofi Gennimata passed away after a long battle and despite the efforts of the treating doctors. We express our heartfelt condolences to her family. "

The daughter of the former minister and PASOK MP, Georgios Gennimata, the president of KINAL, passed away today, at the age of 57. She was born in Athens on November 17, 1964 and was the mother of three children.

In the prefectural elections of October 2002, he was elected super-mayor of Athens-Piraeus in the second round with a percentage of 56,3%, supported by PASOK.

In March 2003, he was elected president of the Union of Prefectures of Greece (HSY) with the support of PASOK and the Coalition of the Left.

On July 3, 2003, he was re-elected by the Central Committee as a member of the party's Executive Board.

In August 2003, he was appointed a member of the 12-member Greek Delegation to the EU Committee of the Regions.

In March 2005, he was elected a member of the newly formed PASOK Political Council and was re-elected in December 2006.

In October 2006, with the support of PASOK, he was re-elected mayor of Athens-Piraeus by the first round with a percentage of 43,4%.

A few days before the parliamentary elections of September 16, 2007, she resigned as mayor of Athens-Piraeus, in order to be the head of the PASOK State ballot and then the Supreme Court did not accept her candidacy, due to a constitutional impediment that does not allow an elected a second-tier candidate to run in the parliamentary elections during his term of office, even if he has resigned.

In October 2009, he took over for the first time a government position as Deputy Minister of Health and Social Solidarity in the first government of George A. Papandreou.

On March 26, 2012, following a decision by the new leader of PASOK, Evangelos Venizelos, he took over the position of spokesman for the Movement, a position he held until June 26, 2013, when he was appointed Deputy Minister of National Defense.

In March 2013, he was re-elected a member of the political council of the movement.

President of PASOK since 2015

On June 15, 2015, he was elected the new president of PASOK. On August 30 of the same year, in a joint press conference with the president of DIMAR, Thanassis Theocharopoulos and in view of the elections of September 20, they announced the electoral combination of the two parties under the title "Democratic Alliance". In the September elections, the Democratic Alliance received 6,28% of the vote and elected 17 deputies.

The creation of KINAL

In July 2017, from the podium of the congress of the Democratic Alliance, the president of PASOK announced the creation of a new political body and called on parties and political movements that would like to express the space of the Center Left in Greece. He also said that by the end of the year, elections will be held to elect the leader of the new political body from the members and voters of the parties that will join the project.

Apart from PASOK, the participation in the political movement was announced by: Potami, the Democratic Left, the Movement of Social Democrats, the Renewal, the Reformers of the Left, the Citizens' Movements for Social Democracy, the Union of Democratic National Reform and the Voice of Democracy.

On November 12, 2017, the first round of elections for the election of the leader of the new political body of the Center-Left took place, in which nine candidates took part.

As none of the candidates won the absolute majority, on November 19, 2017, a second round was held between the first two in which 156.103 people participated with Fofi Gennimata, to emerge as the leader of the new formation with 56,75% of the votes.

On November 28, 2017, he announced the name of the new party: MOVEMENT OF CHANGE and on December 2, the six-member Political Council was formed, consisting of: Fofi Gennimata, Stavros Theodorakis, Nikos Androulakis, George Kaminis, Thanassis Theocharopoulos and former Prime Minister George.

During her studies, Fofi Gennimata dealt with student unionism and joined the PASOK student group close to PASOK.

In 1987, she started working at the National Bank and at the same time in her father's political office until 1989. During the period of the ecumenical government of Zolotas (1989), she took up duties in the private office of the then Minister Gennimata.

In the period 1990-1993, during the Mitsotakis government, he undertook the coordination of the activities of Gennimatas, who at that time was the parliamentary representative of PASOK.

In 1993, when Gennimatas took over the Ministries of Foreign Affairs and Finance, she became the coordinator of his private office. Since 1996, she was elected president of the "George Gennimatas" Group.

GOVERNMENT OFFICES OFFICE - POSITION FROM TO

Note: On December 31, 2002, he resigned because he assumed the duties of super-mayor of Athens-Piraeus and was replaced in Parliament by Eleni Anousaki on 7

Studies: Political Science and Public Administration of the Law School of Athens

The leaders of the EU and NATO pledged today that they will strengthen their cooperation in the face of "hybrid" threats, on the occasion of the visit ...
Read more