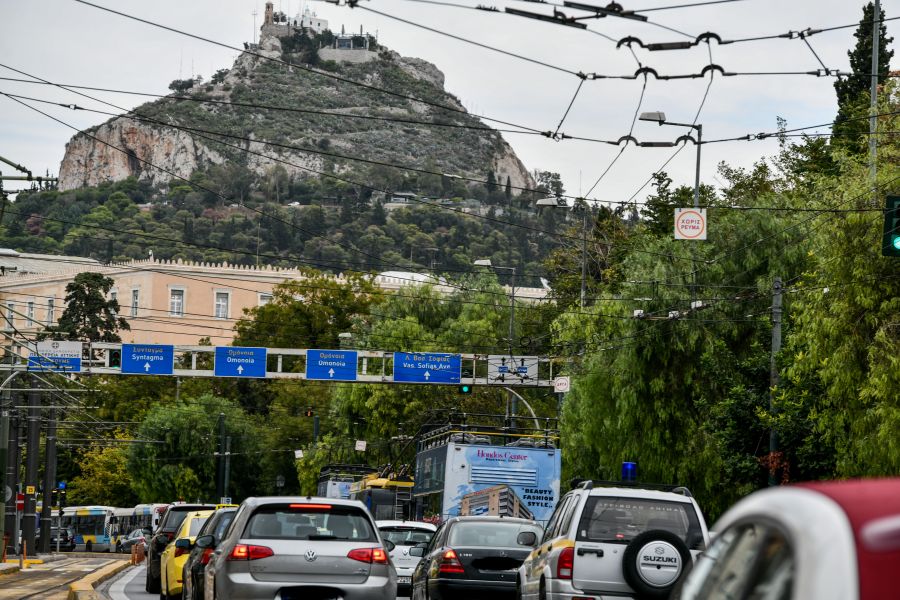 The ring in the center of Athens returned after about 2 years of absence. From today, Monday, October 25, until Friday, July 22, 2022, the restrictive measures of vehicle traffic in the city center, in the so-called "Small Ring", are in force.

The traffic will be daily for all cars with the "single-balance" system. That is: On even dates, private cars and trucks with a maximum permissible mass of loaded vehicle (MAMFO) of up to 2.200 thousand kilograms are circulating, with a registration number ending in 0, 2, 4, 6 and 8 (ie in even number) and the odd (odd) dates are issued by the same type of vehicles, respectively, whose registration number ends in 1, 3, 5, 7 and 9 (ie in odd number).

Ring licenses are granted in the following ways depending on the category of exceptions:

A) for the so-called "clean" cars will be issued a Special Vehicle Traffic Signal in the Ring which will be issued through an electronic application of the Single Digital Portal of Public Administration (gov.gr).

C) for the other exceptions, traffic licenses will be issued by the Attica Traffic Directorate. The traffic licenses in the ring are granted upon application of the entitled to the Attica Traffic Directorate, to which are submitted any requests of interested parties for granting own licenses in addition to the ones provided here, which are satisfied after relevant approval of the Ministry of Citizen Protection.

Transitional measures will apply for the period between the issuance of transit permits by the Attica Traffic Directorate and the special entry-exit cards for permanent residents by the Municipality of Athens. Thus, for a period until 26.11.2021 from the entry into force of the ring, the old licenses will be valid.

All electric, hybrid, natural gas and LPG vehicles and EURO 6 vehicles move freely in the ring if they emit less than 120 g / km of carbon dioxide.

The Special Vehicle Traffic Signal in the Ring for the "clean" cars will be issued (either in electronic form or in printed form) through an electronic application of the Unified Digital Portal of the Public Administration at https://daktylios.gov.gr.

The operation of the service is very simple and citizen friendly. Initially, the interested party authenticates himself on the platform with his codes in Taxisnet and then submits an application for the issuance of the special mark, after declaring the registration number of the vehicle and the TIN of the owner. The data of the vehicle are extracted from the registers of the Ministry of Infrastructure and Transport through the Interoperability Center of the General Secretariat of Information Systems of the Ministry of Digital Government.

The electronic application is a responsible statement. The use of the application is allowed only by certified users, which is ensured by entering the Identification number (number plate) of the vehicle and the Tax Registration Number (TIN) of the main and / or owner of the vehicle. At the same time, the email account will work [email protected] to which citizens will be able to submit their questions.

Cars are excluded from the ring permanent residents of the area enclosed by the boundaries of the ring. Beneficiaries must be provided with a special entry-exit card.

The special card is issued by the competent Services of the Municipality of Athens. These cars for their exit from the ring and their entry into it, will move only within a predetermined zone of the ring, depending on the place of residence of the holder, using the shortest route to and from the residence of the owner.

These special cards will indicate the specific traffic zone that corresponds as well as the name, home address of the holder, and the registration number of the car. They will be provided either through the electronic digital services platform of the Municipality of Athens https://eservices.cityofathens.gr/ or at the offices of the Municipal Police (14 Agiou Konstantinou) by appointment.

Taxis move freely in the ring. In addition, certain other special vehicle categories, such as:

- Doctors' cars, which bear the special mark of the relevant Medical Association with only the same passenger, as will be proved by the medical identity, for emergency service.

- War invalid cars, which have special state license plates, as long as they are driven or transported by the disabled themselves.

- Passenger cars, which are specially adapted or automatic for the transport of political invalids as long as they are driven or transported by the disabled themselves, provided that the disabled person is provided with a relevant certificate from the competent Directorates of the Local Authorities. . of the country to which the registration number of the car will be indicated.

- Vehicles transporting patients who need frequent treatment (such as kidney patients, cancer patients, people with polio or people with disabilities), as long as they transport the above persons, provided that the patients have been provided with a relevant certificate from the competent Directorates of the Regions. country. The certificate will be issued to the interested parties by the competent Directorates of Social Welfare of the Regions, after a similar certificate of the Nursing Institution where the patient is treated and which will indicate the duration and frequency of the required treatment, and the registration number of the car.

- Cars transporting drugs, or vascular surgery materials, or osteosynthesis materials, or spare artificial kidneys, or biological fluid patients, with permanent visible company signals and as long as they carry the above materials. The above use must be evidenced by a relevant indication on the vehicle registration certificate.

- Cars of Government Services, Local Authorities, Organizations or enterprises of public utility with special registration numbers or with visible signs of these Services.

- The car of the head of each foreign mission, as well as the cars of the Consuls, as long as they represent their country in Greece.

- Cars with foreign license plates of Greeks abroad and foreign visitors to the country for the first forty (40) days of their stay in Greece. The inclusion of these cars in the regulations is based on the last digit of their license plate.

- Cars rented by foreign visitors of the country and Greek permanent residents abroad for the same period of time, which can be transported with care of the company to the place of delivery or receipt (airports, ports, hotels, etc.) provided that there is a copy of the corresponding lease agreement in the car.

Also excluded from the ring:

- Trucks for private use (with a maximum permissible mass of loaded vehicle (MAMFO) up to 2.200 thousand kilograms), as long as they transport food or beverages, hospital supplies or make a type distribution.

- Private trucks with a maximum permissible mass of loaded vehicle (MAMFO) of up to 2.200 thousand kilograms, the owners of which are licensed to sell flea market (including those engaged in stationary and street trade) in areas within the ring.

The professional seller's license is an accompanying transport document, based on which the area of ​​trade is proved. The above license will be on the vehicle, valid and valid and will be displayed in case of inspection.

The proposals and problems of the citizens will now be transferred electronically to the Administration of the Municipality of Kifissia, through the District Assemblies. "It is the natural continuation ...
Read more
News Bulletin Athens 9.84

According to research from South Africa, the Omicron mutation causes more than double the infections. According to the study, however, it is not mentioned whether something similar ...
Read more
COVID-19

The World Health Organization (WHO) calls on the countries of the Asia-Pacific region to strengthen their health systems and fully vaccinate their populations ...
Read more
SPORT CITY

Olympiacos: In Kazan with the aim of continuing its winning streak

Olympiakos faces Unix tonight in Kazan, Russia, aiming to continue its winning streak in the Euroleague. After the valuable victory against ...
Read more
984

From December 13 to January 31, the platform for submitting applications for Save 2021 will be open according to ...
Read more
GREECE

World Day of Persons with Disabilities: A Personal Story on Autism in the Prime Minister's First Podcast

"Meetings and discussions with personal routes", inaugurates today the Prime Minister Kyriakos Mitsotakis, opening a new channel of communication with the Civil Society. In the first podcast ...
Read more
IT HAPPENS IN ATHENS

The Art Department of the MARGARITA Special Education Laboratory organizes an online Conference, which will be held as a forum for discussion, exchange of ideas and good practices in ...
Read more