Gov.gr improves the citizens' opinion about the State - 90% satisfaction from its use 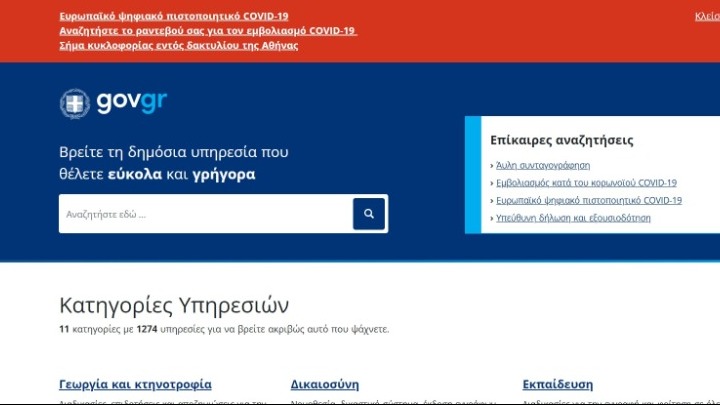 It has been almost two years since gov.gr entered our lives for good. On the occasion of this milestone, the strategy and communication company, Choose Strategic Communication Partner, conducted a large nationwide survey, recording how citizens welcomed the new digital face of the Greek State, but also what they expect to see in the future, in terms of e-government.

According to the poll conducted on October 12-18 and published for the first time in APE-MPE, the majority of citizens (62,4%) know and have embraced the digital State, using its services many times (from those who know it over 61% have used it more than 10 times).

At the same time, they state that they are satisfied with its use, in percentages that exceed 90%. 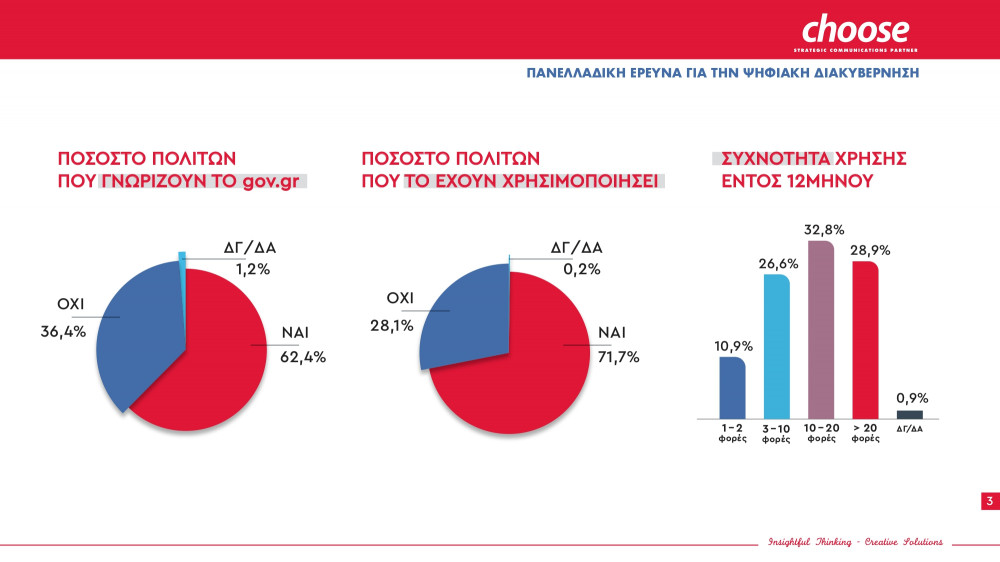 The reasons are what one would expect: gov.gr helps citizens to save time in their transactions with the State (56,8%), allows them to avoid the bureaucracy of public services (48%), but it is also easy in its use. 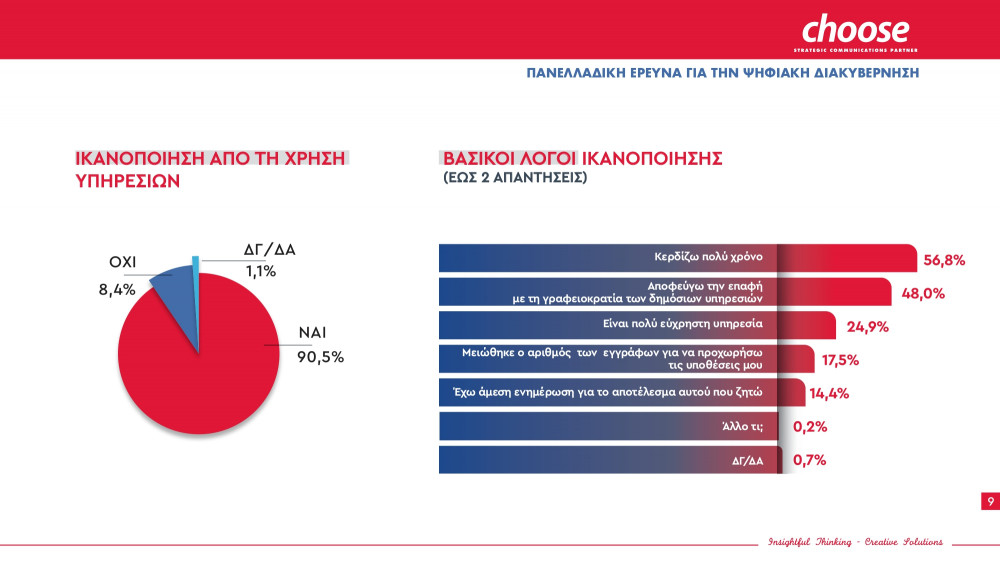 Equally high (60%) are the percentages of those who state that they know the unique number of the citizen who will replace VAT, AMKA, ID, with 50% of them already seeing him positively.

Citizens benefit from the full range of digital capabilities offered by the platform, with an emphasis on declarations, certificates and attestations of all kinds, as well as covid issues.

However, they expect from the competent Minister Mr. Pierrakakis, more electronic services in a number of sectors, with the main ones being health (44,6%), pensions (38,6%), real estate transfers (31,5), certificates and civil registrations (33,5%). 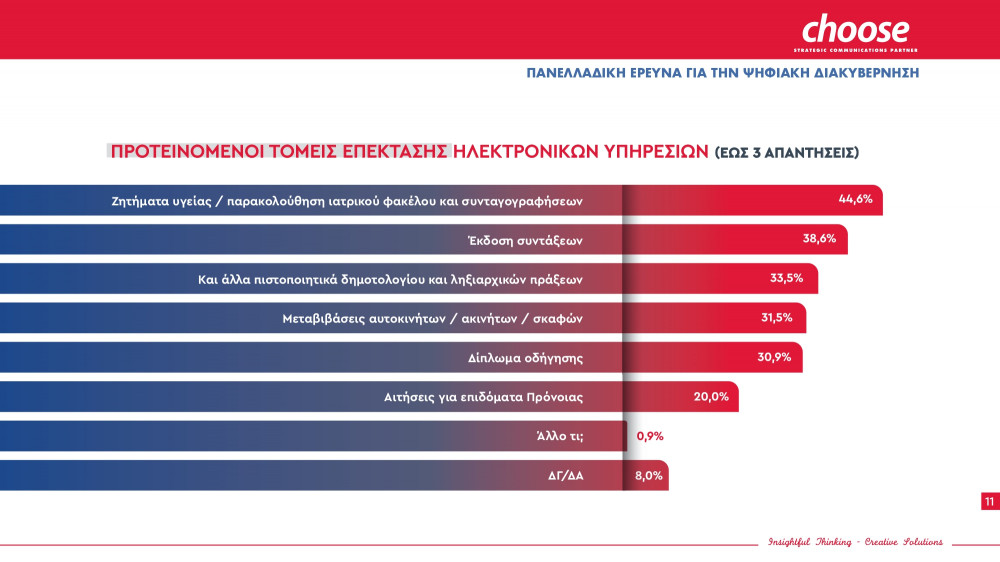 Their satisfactory experience, in fact, from the platform, improved the view they have of the Greek State as a whole, with 64,4% answering that they see it more positively. An admittedly significant change, given that the people of this country are traditionally skeptical, even negative about the state and its ability to serve them. 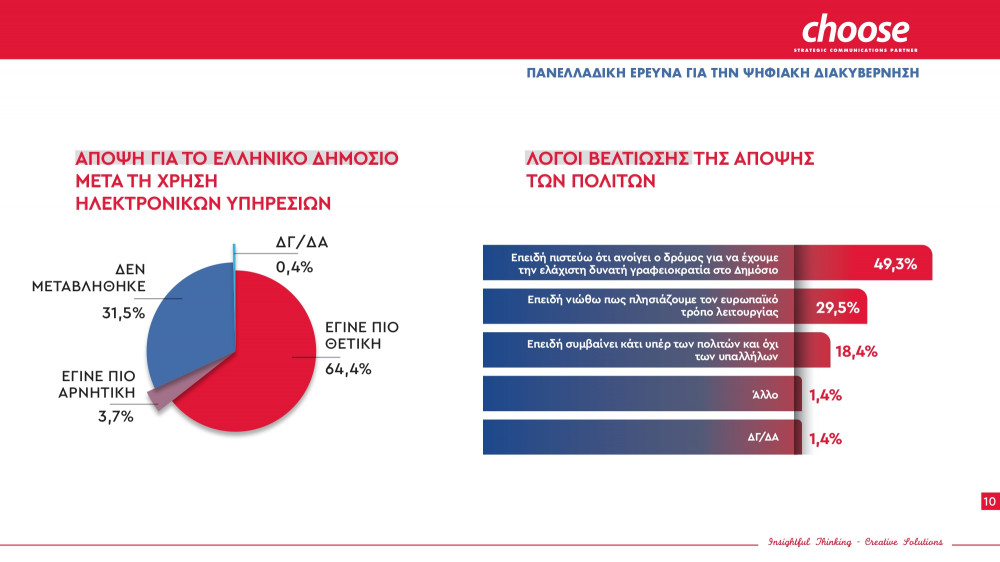 "As if they have been ready for a long time, the citizens welcomed gov.gr. The findings of the research leave no doubt. The majority of citizens not only know the platform but have fully integrated it into their daily lives, stating that they are very satisfied with its use.

In fact, their experience with the new digital government is so positive that it has improved their view of the Greek State as a whole. A change that we have to see since the time when the Citizens' Service Centers were created! ", Notes Mr. Giannis Detsis, President and CEO of Choose Strategic Communication Partner

However, a large percentage of citizens remains, reaching 28% who do not know (yet) the platform, despite the high publicity it enjoys. A serious deficit that could perhaps be addressed with more targeted information efforts.

Regarding the profile of those who use gov.gr, we find the highest percentages (almost 90%) in the younger ages 25-34 and in the graduates of AEI-TEI (88%). 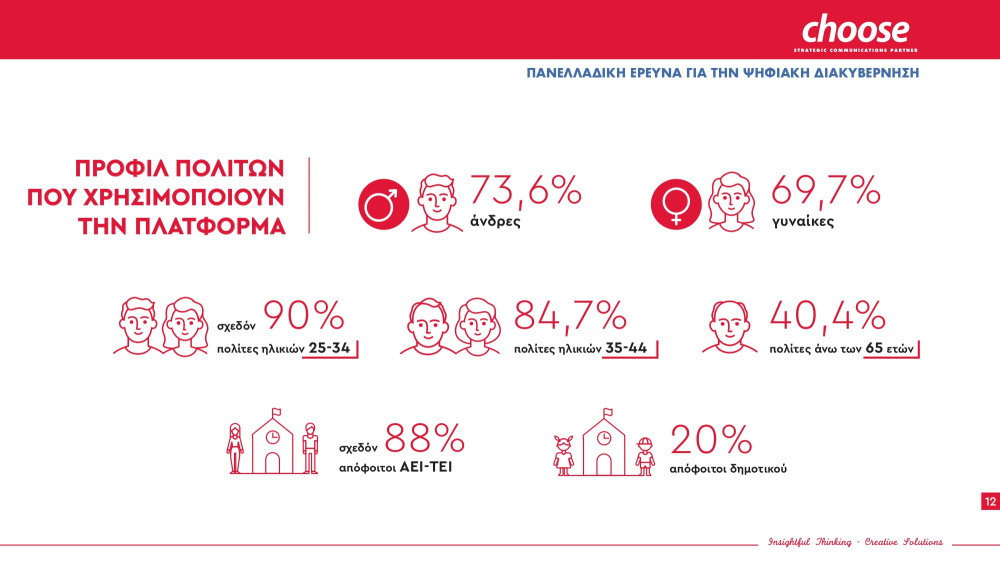 On the contrary, the percentages fall as we get older and lower our educational levels.

Thus, only 40,4% of our fellow human beings aged 65 and over who know the platform, use it and only 20% of primary school graduates, for the simple reason that they do not have the necessary digital skills (44,5%). For this reason, more than half (53%) state that they would use it if someone helps them or they become familiar with computers. 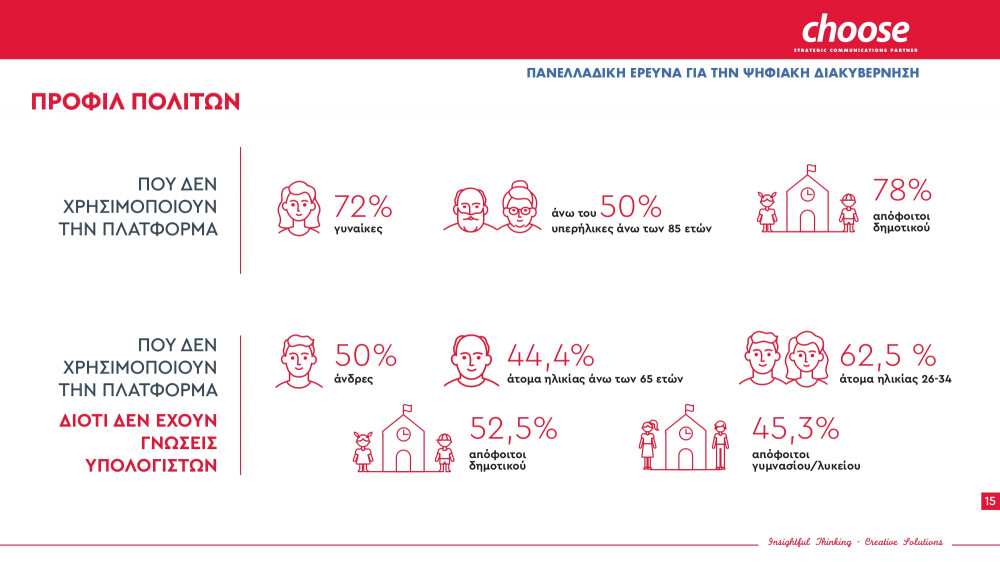 "In other words, we are seeing an emerging digital divide, as older people (65+) and primary school graduates remain largely excluded from e-services.

In fact, given that in the coming years the "analog" public sector will continue to decline over the digital one, there is a risk that this gap will widen even further, increasing inequalities to the detriment of these people and leading to a two-speed society.

"So if we want the new digital age that is rising, not only in the State but also in the economy, to lead to a fairer and more inclusive society, we must take immediate initiatives to combat digital illiteracy, so that all citizens can benefit from the huge possibilities offered by the digital transition ", Mr. Detsis emphasizes.

D. Thanos: The pandemic will not end easily - We do not yet know about the danger of Omicron

The assessment that the pandemic will not end easily, expressed speaking in Athens 9.84 and George Apostolidis, the President of the Scientific Council of the Foundation ...
Read more
WORLD

Honduras presidential election: A clear lead for the left-wing candidate

Afghanistan: The Taliban have called for EU assistance to operate the airports

The Taliban asked for the help of the European Union for the operation of the Afghan airports during the negotiations in Doha at the weekend, while they pledged ...
Read more
984

The Omicron variant spreads - Japan and Israel close the border

The Omicron variant spread to other countries on Sunday, with the detection or confirmation of cases in the Netherlands, Denmark and Australia, ...
Read more
984

Up to 30% increase in real estate transfers

Only 33 days have at their disposal thousands of sellers and buyers of real estate to proceed to the conclusion of purchase and sale contracts as from 1/1/2022 ...
Read more
984

New homicide with a 48-year-old victim in Thessaloniki

A new genocide was committed on Sunday night, this time in Thessaloniki, where a 49-year-old man from Armenia killed ...
Read more