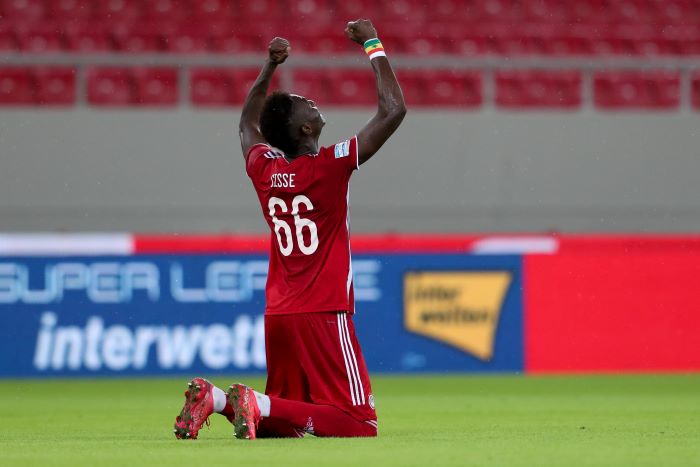 Olympiakos having a very good first half took the victory with 2-1 over PAOK thanks to goals by Agibou (22 ′) and Masoura (31 ′). Thessaloniki reduced to 81 ′ with Murg. Four beams in total in the match.

Olympiakos remained at the top of the standings, beating PAOK 2-1 in "G. Karaiskakis ”. Piraeus had an excellent first half during which they scored two goals with Agibu (22 ′) and Masoura (31 ′), but also a double beam with El Arabi in 29 ′. In the replay, the team of Piraeus ran out of gas, PAOK increased its speed, Lutsescu refreshed his team and managed to reduce to 81 ′ with Murg. In the replay both teams had a crossbar. At 51 ′ Agibu came close to 3-0, while Michailidis had a goal for PAOK at 58 ′.

Pedro Martins has been preparing Gary Rodrγκguez for a long time for the game with PAOK, but again his participation in the starting lineup was a surprise. The African winger was the only change made in relation to the Frankfurt match. His participation in the starting lineup left Bouhalakis on the bench and Olympiakos lined up with 4-2-3-1 having Mandi and Embila in the midfield. On the other hand, Lutsescu lined up PAOK with 4-2-3-1, having Rodrigo, Varela, Michailidis and Siddklay in defense. Swab and Esiti were the midfielders with Zivkovic, Augusto, Biseswar and Akpom playing in the attack.

Pressure and 1-0 with Agibu
The first minutes of the match were recognizable for both teams with Olympiakos, however, being in the mood to play more from the right side with Rodrεςguez. Gary gave energy and combined nicely with Lala who made many races in the attack. PAOK chose to play its defense quite low and to give space to Olympiakos. The "red and whites" pressed the Thessalonians and did not let them move the ball easily. Agibu was moving behind El Arabi and caused a lot of problems for the guests. Somehow in the 22nd minute, together with Reabciuk, he pressed Esiti, he made the mistake, the young African took the ball, shot and it became 1-0.

Beams and second goal
After Agibu's goal, PAOK tried to attack, but did not seem to have the strength to do so. In the 29th minute, Olympiakos had a double beam with El Arabi. Despite PAOK's effort to attack, Olympiacos was the team that worked best on the field and had more players on a good night. In the 31st minute, Esiti made a new mistake, Agibu stole again, passed to his left to Masouras and he defeated Paschalakis for 2-0. PAOK could not bring out any substantial reaction and trouble the team of Piraeus, which dominated the midfield. So both teams were led to the locker room with the score being 2-0.

Beam Agibou and Michailidis
In the replay, Martins threw Oniekuru into the game instead of Rodrεςguez, who did not have the strength to score another half. Lucescu took out Esiti who was in both goals of Olympiakos and put El Kantouri. The match started with enough intensity and with Piraeus trying to push to find another goal. In the 51st minute, Agibu had a goal and in the 60th minute, Lucescu made three changes, putting Mitrica, Vierinias and Sfinderski on the field. Somewhere there, the team of Thessaloniki took measures on the field and the ball at its feet, while at 58 ′ it had a crossbar with Michailidis.

PAOK reduced and threatened
The team of Thessaloniki kept the ball on its feet, circulated it and tried to play football to create phases. Olympiakos, for its part, waited in the half of the field and gave the impression that it was just waiting for the mistake. And it is a fact that there were moments when the Greek champion created situations with his speed. PAOK, however, had not left the match and in 81 Ελ El Kantouri, who calmed down the situation a lot, took the cross on the second crossbar, Murg made the shot on the move and reduced it to 2-1. Then Martins put Kude and Brusai in order to have fresh legs on the field and PAOK, although they wanted to, could not equalize.

Christian Eriksen is the footballer who, according to Danny Alves, deserves to become the holder of the Golden Ball for the health adventure that ...
Read more
SPORT CITY

New "Rising Stars U18" tournament from the EEC

In order to give the young player the opportunity to give more games and to improve, the Hellenic Basketball Federation announced the start of ...
Read more
984