Italy: An arrest and prosecution of 83 protesters in Milan 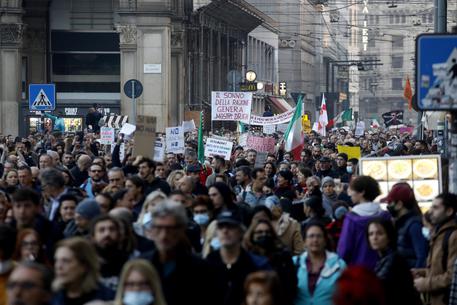 Last night's mobilization of anti-vaccinators in Milan ended with the arrest of a protester and the conduct of a public prosecutor's investigation against eighty-three, as the Italian authorities announced today.

Eight far-right members of the Dodici Raggi movement (Twelve Rays) made a fascist salute with a thumb up and are now accused of fascist propaganda.

At the same time, the Milan police director signed nine decisions for the mandatory removal of so many other people from the Italian co-capital.

Police forces did not allow protesters (mobilization had not been licensed by the Prefecture) to reach out to CGIL Central Trade Offices.

The League of Italian Guerrillas Against Fascism unequivocally condemned the protest and all those who "are an attack on democracy, the workplace" and stressed that "Italian resistance to the fascist dictatorship has nothing to do with those protesting against the embolism." of the green fold ".

The weather will be improved today compared to the previous days, with local rains forecast in the eastern mainland, the Ionian, the Epirus, ...
Read more
WORLD