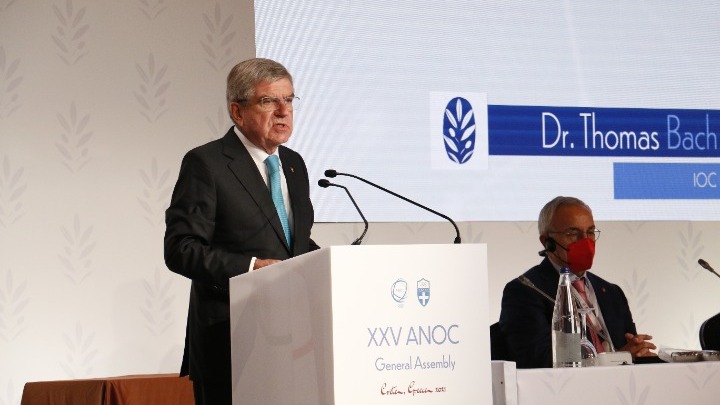 The work of the 24th General Assembly of the International Union of National Olympic Committees (ANOC), held in the Heraklion Peninsula of Crete, by the Ministry of Sports and the Hellenic Olympic Committee, started today (10/25) this morning, after two years due to coronavirus pandemic had not occurred.

The General Assembly is attended by representatives of the 205 Olympic Committees of the countries from around the world (155 of them in person and the rest via video conference), the President of the IOC, Thomas Bach and its Executive Committee, as well as International Olympic Sports Federations , the Organizing Committees of the Olympic Games "Tokyo 2020" for its report, "Beijing 2022" (Winter) and "Paris 2024" for their planning.

Among the main topics of the General Assembly are the information on the application process for the ANOC World Coastal Games, the presentation of the ANOC strategic plan, as well as the reports from the ANOC Committees and the Organizing Committees of the Olympic Games. The opening of the ANOC General Assembly was greeted by the Deputy Minister of Culture and Sports Lefteris Avgenakis, Mr. Avgenakis welcomed the participants, stating that "it is an honor for Greece to be here, in Crete, in Heraklion, all the leaders of the Olympic movement, the protection and promotion of Olympic values ​​around the world "adding that through the General Assembly the necessary messages of the time of the Olympic Ideals will be sent to the whole world" reopening roads as only sport knows and can do. The sport that has the power to change the world "added Mr. Avgenakis.

In his statements, Mr. Avgenakis stated that this is a top moment, during which the world is called to play an important role, in important issues related to the environment, the refugee / immigration, but also issues such as what is happening in Afghanistan, with against the background of the initiatives already taken by the ILO.

"These are initiatives that I am convinced that sport must take on with great speed and contribute to world peace. "Olympic values ​​and Olympic ideals are the best time to find greater application and the ambassadors of this effort are the representatives who are participating today in this General Assembly", said the Deputy Minister of Sports, who added that the image that the participants will obtain "is a better description of what Greece is today "while he concluded that" both we as a country and as a Government "are very proud that the strategy of extroversion bears fruit".

The current president of ANOC, Robin Mitchell, pointed out that it is wonderful to meet so many representatives from the family of the National Olympic Committees, as well as from the wider Olympic Movement, here in Crete. "The significant turnout is a sample of how much the National Olympic Committees value meeting in person. "After two years without a General Assembly, the next few days are really important, as we adapt to a world after COVID-19," Mitchell added.

The president of EOE, a member of the ILO, president of the European Olympic Committees and vice-president of ANOC, Spyros Kapralos, underlined: because all these people came to honor our country, which gave birth to the Olympic Games and of course the General Assembly of the Olympic countries of the world that takes place for the first time in Greece after the Athens Olympic Games, is an important event that puts the country back in Olympic map in the best possible way ".

Tonight, Sunday, October 24, at 7 pm, as part of the work of the General Assembly, the Award Ceremony "ANOC Awards 2021" will take place, for the best athletes of the Tokyo Olympic Games, together with the best Greek, the which will be broadcast live by ERT.

Coronavirus: Wall of immunity by the end of the year - Estimates for de-escalation

The estimate that by the end of the year the wall of immunity will reach 80% was expressed by the professor of Environmental Engineering of the Aristotle University of Thessaloniki, Demosthenes Sarigiannis. Such as...
Read more
GREECE

Bloody incident with an injured person in the center of Thessaloniki

A person was attacked and injured by a sharp instrument, by two foreigners, at two in the morning, in the center of Thessaloniki. The injured was transported with ...
Read more
News Bulletin Athens 9.84

Australia is the country that was added today to the list of confirmed cases of the Omicron variant of the coronavirus. It's about...
Read more
WORLD

A young Guatemalan, who hid in the pit of the landing system of an American Airlines aircraft, came out alive yesterday, Saturday, after the flight from his homeland ...
Read more