"The conclusions of the previous Councils regarding Turkey apply in full. "Turkey has to choose between two paths: the path of sincere cooperation under international law or unilateral provocation," said Prime Minister Kyriakos Mitsotakis in a press conference after the European Council meeting, where both he and President of the Republic of Cyprus informed about what is happening in the Eastern Mediterranean.

"I think she knows very well what the consequences of her choices are and I want to hope that she now understands the context of the European Council decisions and the possible consequences if she continues her provocative behavior," he said. "Greece has proven to be a force for legitimacy and stability in the Eastern Mediterranean."

Referring to the issue of the effects of the increases in the price of gas, Mr. Mitsotakis pointed out that the problem is pan-European and needs a pan-European response.

He pointed out that our country has launched interventions to support the incomes of the most vulnerable households, stressed that its initiatives are in line with the EU toolkit and welcomed the fact that the European Commission was asked to make an assessment of the overall way very soon. operation of the electricity market, to identify possible distortions and to make suggestions on how we can correct such sharp increases, such as those we have been experiencing in recent months.

He also pointed out that the Greek government has submitted proposals such as the possibility of the EU to strengthen natural gas storage, but also the possibility in the future to buy natural gas as an EU, as many countries want, as we did with the purchase of vaccines.

The Prime Minister also said that what is happening in the Eastern Mediterranean is not only about the sovereignty and sovereign rights of two EU states, Greece and Cyprus, but has a broader geopolitical and energy significance for the EU as a whole.

He also stressed the special importance of the Eastern Mediterranean basin as an alternative source of energy for Europe, while answering a question about how Europeans saw the Greek proposal to make the Eastern Mediterranean an alternative energy hub for Europe, he stressed that " "The response was as positive as expected," he said. "At a time when Europe is looking to expand its gas supply, it would be unthinkable to ignore our neighborhood." "Transporting liquefied natural gas from Egypt to Greece is definitely cheaper than transporting it from the United States."

Referring to immigration, he expressed satisfaction with the final text of the Conclusions as it was formed after the interventions of our country, noting that it is significantly improved compared to the original version and referred in particular to the explicit reference to Turkey complying with the EU 2016 agreement. - something that was not included in the original text.

He also stressed the explicit reference to the non-acceptance of the instrumentalization of immigration for other purposes, something that also concerns Turkey, it also concerns the case of Belarus.

As Mr. Mitsotakis said, the EU is absolutely determined to guard the European borders and the European Council calls on the European Commission to propose any necessary changes to the EU legal structure, as well as concrete measures and funding so that we can protect more effectively the country's external borders. He also recalled the great debate within the EU as to the extent of EU funding, whether or not the EU could finance a fence, a stable structure at the external borders of a country that is also the EU's external border.

As he said, Greece has made such a choice, at the moment it finances the fence in Evros with national resources, but I believe - and I am not the only one expressing this opinion - that if we want to be serious, substantial and effective in guarding "There is no reason why such interventions could not be financed from the European budget," he added.

Speaking about the pandemic, he stressed that it is not over yet, but also that we find that there is caution in vaccinations in many European countries. He emphasized that the questions about whether they should be vaccinated, that they should make that choice ".

"We do not abandon the persuasion effort of Greek society. On the contrary, we should intensify it even more and use all the means at our disposal ", he noted and added that" if we need to say it a thousand times, we will say it a thousand times: that at the moment 9 out of 10 fellow citizens "Those who are in intensive care are unvaccinated."

"It is a very harsh reality. Just look at the data from all the hospitals. And it is not only a Greek reality. Talking to our counterparts everywhere we see the same data. "Today we have a pandemic of the unvaccinated," he added, adding that "society and the economy will not shut down again."

"The measures we have taken are very clear. They are measures to protect the unvaccinated. We have a very clear framework for what they can and cannot do. We have one of the best epidemiological surveys in Europe, with so many tests being done, far more than in many other European countries. We have a way of monitoring the pandemic in our schools which I consider to be exemplary and it enables us to continue our education by detecting coronavirus cases very quickly. And beyond that we will keep trying. Every vaccination that is given is a profit. "And we can definitely improve our performance further in this area," he added.

Mr. Mitsotakis also appealed to the citizens who are entitled based on the recommendations of the experts to make the third installment: to hurry to do it, but not to neglect at the same time the need, for those who will be indicated by their doctors. and there are many, to make the flu vaccine, as we do not want to be in the difficult position of having to manage in the winter at the same time a pandemic on the rise and a flu on the rise. 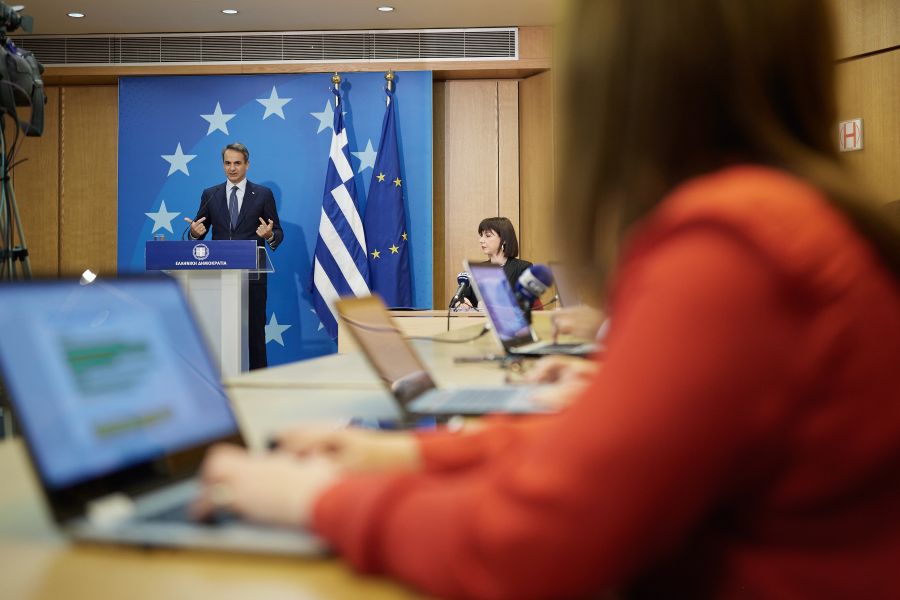 Answering a question for Chancellor Angela Merkel's visit to Greece next week Mr. Mitsotakis expressed satisfaction for the acceptance of his protection, noting that "it will be an opportunity for her, but also for me, possibly to make an account of the Greek-German relations".

"I have great respect for Chancellor Merkel, for the stability and agility with which she always moves within the European Council, at least as long as I have lived it for these two years," he said. , to talk about the Chancellor's special relationship with Greece. I think she will be the first to confess, she has also said, that in many times she asked a lot from the Greeks and that austerity went beyond what the Greek society could bear. At the same time, it was she who at the critical moment went against the suggestions of her ministers and decided to keep Greece in the European Union ".

Christian Eriksen is the footballer who, according to Danny Alves, deserves to become the holder of the Golden Ball for the health adventure that ...
Read more