L. Mendoni: Important cultural projects are in progress in Zakynthos 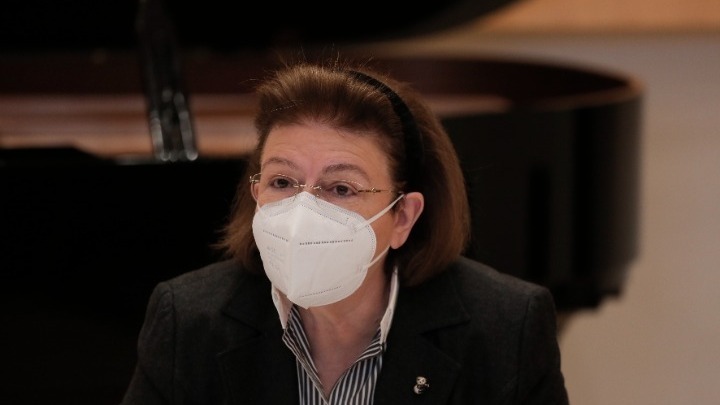 During a visit to the island, the Minister of Culture, Lina Mendoni, mentioned a series of very important cultural projects that are in progress in Zakynthos.

The minister praised the cultural wealth of Greece, saying that "it is so great and spreads throughout Greece. Every part of Greece has its own cultural physiognomy, which is almost always very rich. It is one of the tiles that compose the archaeological and historical context of this country that has a huge heritage and a historical significance worldwide. The Region of the Ionian Islands is a Region that we particularly love, an island Region which has played a very important cultural role ".

Regarding the project for the restoration of the historic church of St. Catherine of the Gardens, Ms. Mendoni said that "the contract was signed with the contractor the previous days and in the coming days it will be installed here" while reference was made to the project in Panagia Anafonitria .

One of the most important projects implemented by the Ministry of Culture is the restoration of the castle monastery on the island of Strofades. The minister stated in this regard, that "we are carrying out the very difficult and complex work, the restoration of the monastery in Strofadia, through the program contract that exists between the Region and the ministry. The contractor has been installed, the preliminary work is being done to remove fallen stones, clean up until the project is completed on the pier, in order to go a larger boat, which will transport the cranes, as at the moment they can not go down to the island to start the project systematically ".

Also, according to Ms. Mendoni, one of the most historic and majestic buildings in the city of Zakynthos is being upgraded, the building that houses the archeological museum. The Minister of Culture stated that "the museum has unique exhibits, which are connected with the very creative and valuable cultural physiognomy of the island", while she revealed that at the moment, five of the images from the museum's collections are in the very large exhibition of the Louvre Museum, is honorary for Zakynthos and important for Greece, because for the first time post-Byzantine and modern painting is exhibited ". Regarding the schedule of studies for the work on the museum, Ms. Mendoni stated that "at the Archaeological Museum, in the first ten days of December, we will auction its restoration study. It is a study that was originally estimated at 580.000 euros, but eventually needs 940.000 euros, starting from the whole energy upgrade of the building, with absolute priority in a modern physiognomy of this historic building. By the end, in 2022, there will be a complete study and in the next programming period to include the project ".