The contract for the Mediterranean Coastal Games "Heraklion 2023" was signed 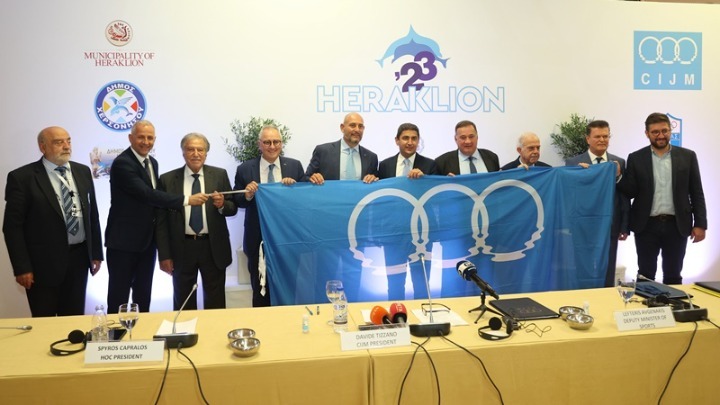 The Contract for the Organization of the 3rd Mediterranean Coastal Games "Heraklion 2023" was officially signed today and the Flag was handed over by the International Committee of the Mediterranean Games.

The new President of the International Committee of the Mediterranean Games (DEMA), Davide Titsano, the Deputy Minister of Culture and Sports, Lefteris Avgenakis, the President of the Hellenic Olympic Committee, Spyros Kapralos, the Mayors of Heraklion, Vassilis Lambrinos, and Malevlas, Malevis, Malevis Hersonissos, Konstantinos Anastasakis (representing the mayor, Giannis Sego, who was absent abroad), co-signed the withdrawal agreement, received the flag of the Games, exchanged souvenirs and the countdown for the event began (September 2-9).

The 3rd Mediterranean Coastal Games will be attended by all 26 countries from the three continents of the Mediterranean basin and the participating athletes are estimated at 1.500. At least 13 sports will be held as follows:

* on the beach of Karteros those of sand (Volleyball, Football, Handball, Tennis, Wrestling, Karate)
* on the beach of Ammoudara in Malevizi Offshore Swimming, Water Skiing and Triathlon
* Rowing, Canoe and Kaicherf on the beach of Mallia in Hersonissos
* and in the open swimming pool Lido of EAKI the Technical Swimming.

The Undersecretary of Sports stressed, among other things, that "our three coastal Municipalities, with the guarantee of the State, the Government and together with the Hellenic Olympic Committee, join forces in order to host this unique sporting event, of the 26 countries from the 3 continents in the Mediterranean basin. And there is no greater honor for our country than to be entrusted with the implementation of an event that unites the peoples and will promote on the world stage both the sports spectacle and the special cultural elements, in combination with its unique natural beauties. Of Crete ".

At the same time, Mr. Avgenakis pointed out that "our local community is active in a wide variety of sports and the region has a huge natural coastal wealth and a great sports history. But most importantly, we have the will to succeed and I am sure we will excel.

The modern sports infrastructure projects that have been planned in view of the event, the mobilization of all sports, productive and tourist organizations in the region, but also the experience that our country has overall from the organization of the Mediterranean Coastal Games in Patras in 2019, create a strong "recipe". The "recipe" for success ".

The president of DEMA, Davide Tizano, underlined that "this is the 2nd time that the Mediterranean Coastal Games are organized in Greece and I am glad that they are back. There is the right infrastructure to make perfect sports facilities and I am sure that the games will be successful. I want to thank EOE, of course the mayors and to congratulate the Deputy Minister for the warm welcome, the effort and for his support in the organization.

We look forward to returning for these races. Crete, your homeland, your culture, is also our culture and our homeland and I am sure that everyone who will participate in the Mediterranean Coastal Games of Heraklion will feel it ".

The "freezing" of the charges of the Utility Services in the accounts of PPC for a period of five months and the payment of the gas bills in ...
Read more