Record cases and deaths in Ukraine - Measures are back in Kiev 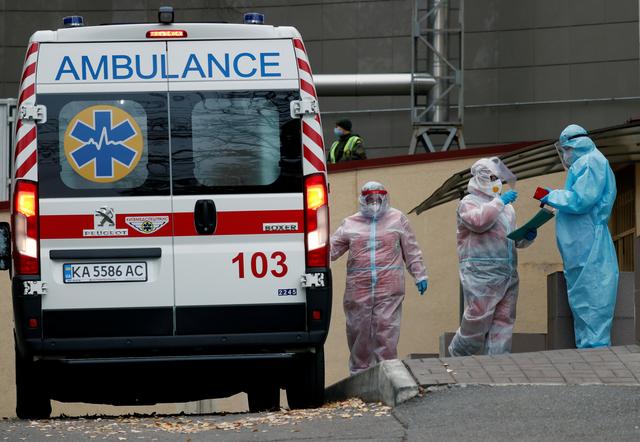 A record number of cases and deaths by Covid-19 were set by Ukraine for the second day in a row, forcing the authorities in the capital, Kiev, to reinstate strict restrictions.

According to official figures, 23.785 people became infected and 614 died within 24 hours in the country, whose health system is in serious short supply.

"The situation is very worrying," said National Security Committee Director Oleksiy Danilov. He estimated that the number of deaths could increase to 1.000 on a daily basis.

Students in Kiev will not go to school for the next two weeks - the first week coincides with the autumn holidays. Kindergartens will remain open as long as all employees are vaccinated.

The closure of shops, theaters and other public places may also be announced if their employees are not vaccinated.

Ukrainian authorities have long struggled to secure vaccines and persuade the population to get vaccinated. In a country of 41 million people, only 16,5% have been vaccinated to date. Recent measures, however, such as the introduction of a "health passport" in the worst-hit areas, have increased vaccinations. In the last 24 hours, 269.666 people have been vaccinated, a record number since February.

Since the beginning of the pandemic, 63.003 people have lost their lives in Ukraine.

The Greek-English singer D3lta on the stage of six dogs

The Greek-English singer and songwriter D3lta, who was introduced to us with Hypocrites and Hey you and two amazing music videos, produced by Jim Abbiss, comes to the stage of six dogs for ...
Read more
COVID-19

The company AstraZeneca hopes that its antibody cocktail for Covid-19 will remain effective against the new variant found in the South ...
Read more
News Bulletin Athens 9.84

EPO for Van Sip: "Our vision is different given the account of the Qatar plan"

The EPO expressed its own position on the issue of "divorce" with John Van Schip. With its announcement, the federation responds to ...
Read more
984

The new measures taken by the government to prevent the risk of mutation that occurred in Botswana were announced by the Ministry of Health. Specifically, regarding ...
Read more
SPORT CITY

The Men's National Team arrived in Thessaloniki and started its mini preparation for the home match against Belarus, with ...
Read more
CIVILIZATION

Wind farm at the National Theater: A mosaic of memories, stories and tales from the East

A show-recollection of the childhood innocence but also the memory of the separation from the birthplace of Asia Minor a few years before the Great Catastrophe, from which this year marks 100 years. The...
Read more