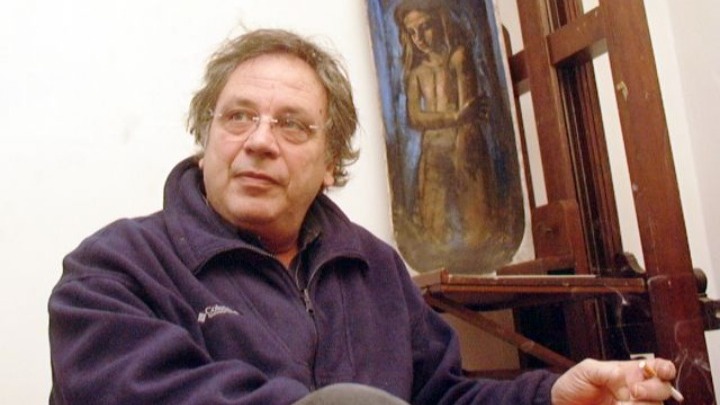 The painter and director Kyriakos Katzourakis died at the age of 77. His funeral will be held on Monday, October 25, at 15:00 from the First Cemetery of Athens.

Kyriakos Katzourakis was born in Athens in 1944. He studied painting at the Athens School of Fine Arts with Giannis Moralis and set design with Vassilis Vassiliadis (1963-1968). In 1966 he presented his first solo exhibition at the Kerea Gallery (Athens) and in 1969 he won the Parthenis Award for his painting. From 1972 to 1986 he lived in London and did postgraduate studies in engraving (1973-1975: St. Martins School of Art and Croydon College of Art).

His painting is anthropocentric, with elements of critical realism that aim to awaken the viewer's consciousness. In some periods of his work there are conscious references to artistic elements of "Greekness", with influences from Tsarouchis, Kontoglou or Theofilos. In his most recent works, he adopts a personal style with strong expressionist elements and creates large-scale works with complex images, while he begins to combine painting with theater, music and literature, while developing an important writing activity.

In 1979 Kyriakos Katzourakis represented Greece at the Sao Paulo Biennale and in 1980 at the 11th Paris Biennale, in 1982 at the Europalia (Antwerp), in the exhibition "Peinture Grecque 1968-1988" (Brussels 1988) etc. In 2013 the Benaki Museum organized its retrospective exhibition. His works are in public and private collections in Greece and abroad.

He participated in the cinema in 1968 as an actor in the award-winning film of the Municipality of Theo Kierion that referred to the "Polk case". He has designed the costumes for the film Days of '36 by Th. Angelopoulos (1971) and the sets for The Consul of Anna by P. Voulgaris (1972). He also staged many theatrical performances.

Since 2000 he has been actively involved in cinema, creating short and feature films. His film The Road to the West (2003) was awarded the 1st State Prize for Best Documentary and the FIPRESCI Award. The film Sweet Memory (2005) also won awards.

Kyriakos Katzourakis was a founding member of the group "Young Greek Realists" (1969-1973), along with Valavanidis, Digas, Botsoglou and Psychopedis, a group that acted during the dictatorship aiming to critique the political and social events of the period.

In 1990 he founded the "Art Group", with the aim of researching the relations between the arts (painting, theater, music, photography, cinema…), while creating works in the field. He was also a founding member of the Artists' Association "Europa 24" (1991-1998). He was also the artistic director of the Art Workshop of Egaleo (1997-2003). In 2005 he was elected full professor at the School of Fine Arts of the Aristotle University of Thessaloniki, where he taught until 2011.

Kyriakos Katzourakis "was an active citizen, anxious and irreconcilable," the Hellenic Cinema Center said in a message of condolence.

"He was also a diverse artistic personality. Great artist, one of the leaders of his generation. Set designer, actor and director. His artistic career, from the years of his apprenticeship with G. Moralis to his films, was a long way into a harsh social reality ", emphasizes the message of EKK, expressing deep condolences to Katia Gerou, companion of the great artist and director, and his family.