Tripartite Greece-Egypt-Cyprus: At the "table" the developments in the East. Mediterranean, Cyprus and Libya 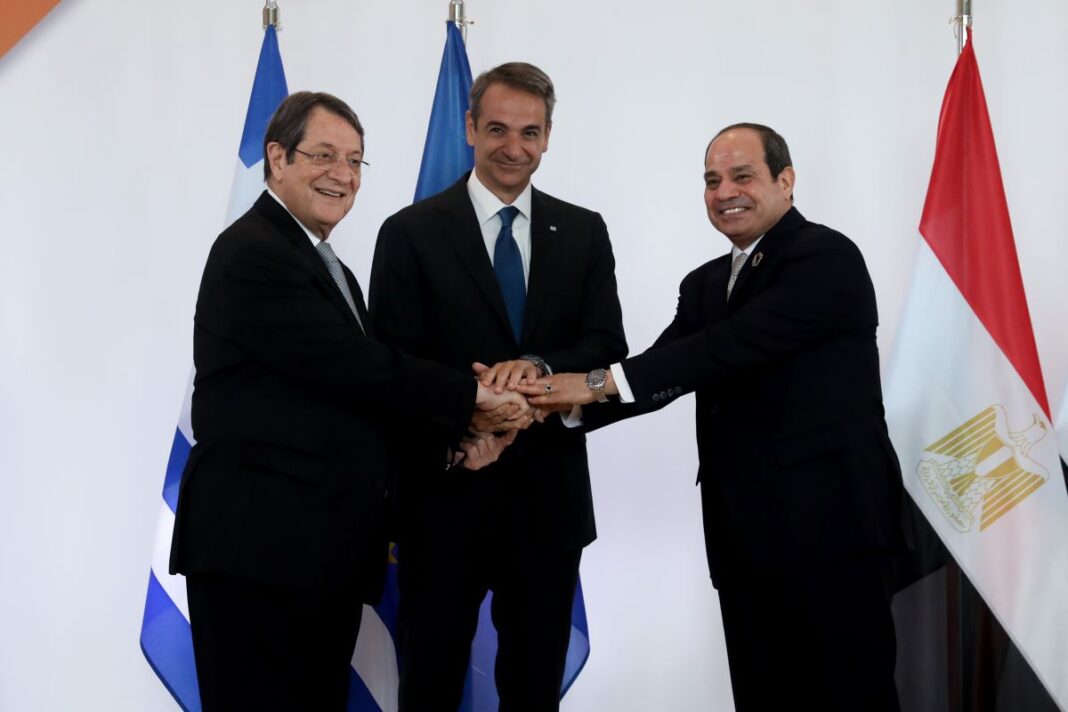 Developments in the Eastern Mediterranean, the Cyprus issue, Libya in the run-up to the December 24 elections in Syria and Lebanon are at the heart of the 9th Greece-Egypt-Cyprus Tripartite Summit under way at the Hilton Hotel. The joint statements of the Prime Minister, Kyriakos Mitsotakis, the President of Egypt, Abdel Fattah Al Sisi and the President of the Republic of Cyprus, Nikos Anastasiadis are scheduled for 13:00.

The three leaders are expected to adopt a Joint Declaration that will signal their common views on developments in the region and the wide range of cooperation between the three countries, especially in the field of energy and environment, while the presence of the three leaders is expected to be signed by the relevant ministers. Memorandum of Cooperation for the interconnection of the electricity networks of the three countries, as well as for the cooperation in matters of Abroad
Government sources estimate that the 9th Greece-Egypt-Cyprus Tripartite Summit is expected to signal "the reaffirmation of the strategic importance that Kyriakos Mitsotakis attaches to the grid of regional cooperation schemes, which are based on common perceptions of a range of critical issues and cooperation." in a number of sectors with a key energy sector, as already shown by the Memorandum of Cooperation between Greece and Egypt for the electrical interconnection of the two countries "
At the same time, they emphasize that the Memorandum on the electricity interconnection of Egypt and Greece, which was signed a few days ago, is "an agreement of great geopolitical and energy importance, which confirms the strategic Athens-Cairo relationship".
As they point out, "this is the first interconnection of Europe with Africa, for a project that will pass through the demarcated Greek-Egyptian EEZ and can transfer to Europe through Greece cheap" green "electricity, turning Greece into a node of" green " electric power".
Government officials point out that "the signing of the Memorandum of Understanding on electricity interconnection comes at a time when the debate on Europe's supply chain and energy security is at the top of the agenda in Brussels, and the issue will be addressed at the forthcoming European Summit." Council.
In parallel with the work of the tripartite Summit, a business forum will be held at the Hilton with the participation of entrepreneurs from the energy and shipping sectors, in order to give impetus to the development of cooperation in the specific sectors of the economies of the three countries.

Mitsotaki-Al Sisi meeting - Focusing on energy, defense and developments in the Mediterranean

The Prime Minister Kyriakos Mitsotakis informed the President of Egypt, Abdel Fattah Al Sisi, about the recent provocative moves of Turkey, emphasizing its destabilizing role in the wider region, during their meeting at the Maximos Palace.

According to government sources, Mr. Mitsotakis reiterated his readiness for dialogue and rapprochement on the condition of respecting the international law, sovereignty and sovereign rights of our country and refraining from provocative actions.

He also briefed Mr. Sisi on the recent strategic moves of Greece in the diplomatic field, which confirm and strengthen its role as a pillar of stability and security in the wider region and open new prospects for closer cooperation with countries that have the same priorities for the Eastern Mediterranean. such as Egypt.

During the meeting, the excellent level of bilateral relations was confirmed, while emphasis was placed on the energy and defense sectors. Developments in the Mediterranean and the wider region, which call for the development of the EU-Egypt strategic relationship, were also discussed.

The two leaders also discussed the latest developments in Cyprus and Lebanon, a country with which Greece, Cyprus and Egypt have excellent relations and to which they provide firm support, as well as developments in Libya and the country's prospects after the elections. .

Episodes occurred in Toumba when PAOK fans entered the stadium shortly before the end of the eternal match of the co-capital. The teams left and ...
Read more
SPORT CITY

Grief in the local community of Oropos, for the unjust loss of two elderly people, an 88-year-old man and a 79-year-old woman, who were found dead, by a private ...
Read more
984

"The return of a fragment of the Parthenon frieze to Greece and to the Acropolis Museum, is being launched with the introduction, for the legal opinion ...
Read more
WORLD

J. Darmanen: France will not be held hostage by Britain

France is ready to enter into a "serious discussion" with Britain on issues related to irregular immigration, but will not ...
Read more