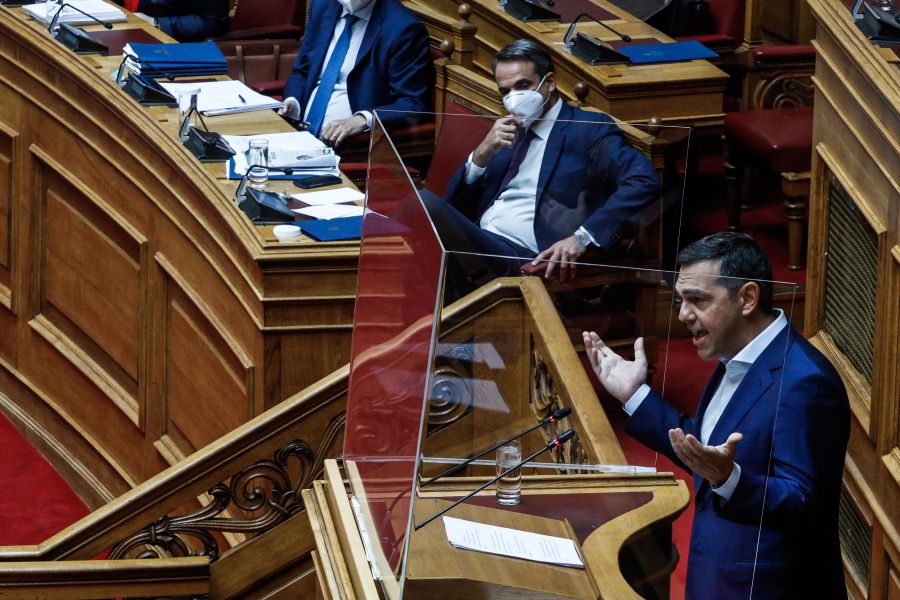 The Prime Minister blamed Alexis Tsipras for arbitrary comparisons, false conclusions and miserable allegations, adding that in Mr. Tsipras' position there is no serious proposal with substantiated solutions to the pandemic problem.

"The economy and society will not close again, the position of the government is a given," the prime minister repeated, denying that in our country there is excessive mortality due to Covid.

He finally launched an attack on SYRIZA for undermining the vaccination effort, stepping on two boats, citing Pavlos Polakis as the protagonist of the forced vaccination movement, when he realized that he could not perform his duties as a doctor.

"The anti-vaccination voices in the world came from either the far right or the far left, you allowed bilingualism within the party itself, which undermined the tight front in favor of vaccination," the prime minister said, accusing SYRIZA of followed by a no of the opposition.

SYRIZA President Alexis Tsipras harshly criticized the government, which he accused of conscious apathy towards the pandemic, calling on the Prime Minister to assume his responsibilities, because - as he said - the country is not governed by simulation and is not social. experiment the lives of 11 million people.

Developing his topical question to the Prime Minister, Mr. Tsipras, pointed out that the government must stop hiding the deaths under the rug, investing in the "omerta" of the media and the habit of loss.

"The government has decided on its own to whistle the end of the pandemic and create a climate of relaxation in the face of danger, when since August our country is in the worst position in Europe in terms of victims per million population, while every week "About 300 of our fellow human beings are missing," said the opposition leader.

Regarding the vaccination coverage, he noted that we are the last among the countries of the European South and accused the Prime Minister that "from the first moment he acted in terms of communication and political expediency, leaving the country going blind".

Mr. Tsipras, after referring to the paradox of our country having a lawyer, Minister of Health and a doctor, Minister of Justice, attributed the decision of the Prime Minister to place Mr. Plevris in the Ministry of Health, in his attempt to turn a blind eye to vaccinators. "And instead of isolating the vaccinators, you are also distributing money on their channels that consider the vaccine a fraud and a Masonic conspiracy," said the SYRIZA president.

For audacity, arrogance and incoherent accusations against the opposition, he accused the Prime Minister, Alexis Tsipras, in his deuterology during his deuterology from the floor of Parliament. Using extremely high tones, the SYRIZA president harshly criticized "the Prime Minister's decision to use the pandemic to have full control of the situation and to establish a regime in information", which - as he said - makes Mr. Kurtz to imagine a student next to him.

"You financed the sprayed people to make a campaign against the vaccination and then the opposition is to blame for you", commented Mr. Tsipras, referring to the case of "Vergina TV", the channel owned by Adonis Georgiadis' best man and in which there are shows that claim that Soros and Gates are behind the vaccine.

Mr. Tsipras, after characterizing the prime minister as irresponsible, called on the citizens to be vaccinated and not to accept the logic of relaxation.

Closing, referring to the vaccination effort, he pointed out that there is also individual responsibility and that he does not have the ability to force the Greeks to be vaccinated, clarifying that he will not extend the compulsory vaccination further.