Plakiotakis: We stopped the uncontrolled migration flows without losing a single life 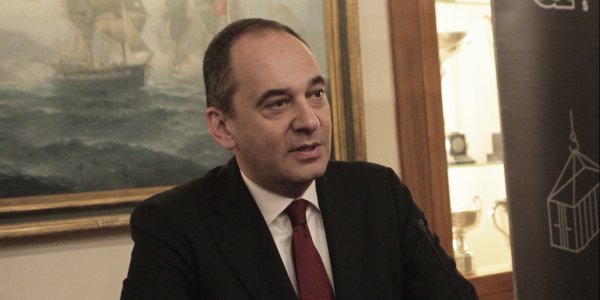 "Since March 2020, the Coast Guard has stopped the uncontrolled flow of migrants from Turkey, without even losing a single human life in companies, mainly in the Eastern Aegean," said Minister of Shipping and Island Policy Giannis Plakiotakis at the 14th Panhellenic Conference. Of the Coast Guard (PEALS) in Chania.

The Minister stated that he has regular contact with the representatives of the Coast Guard and through the meetings very constructive and productive results for the industry have emerged.

"The modern global community of the 21st century is moving on an extremely sensitive dilemma: safety and environmental protection. "One can not deny that the successful outcome of the many and complex issues that revolve around this basic diptych depends, to a large extent, on their effective response at sea," he said.

He stressed that "success in such a challenge is not a magic wand. It is not luck. It is the result of work, organized and coordinated ".

He said that from the first moment he took over the political responsibility of the ministry, he provided solutions for the personnel of the Coast Guard, its means and resources, training and care.

Mr. Plakiotakis made a brief reference to some of the activities of the previous two years.

1. Increase of the organic positions by 1.500 people, reaching the organic strength of the Coast Guard to 9.500 positions.

2. Recruitment, since July 2019, of 589 officers of the Corps - 134 Probationary Flag Bearers and 455 Probationary Port Guards, while the competitions for 105 officers specializing in captain or engineer are in progress. Also, as he pointed out, with the initiative of the ministry and the approval of the prime minister, the classification of the 2019 competition is extended with the additional staffing of the Corps with an additional 25 Officers and 70 Port Guards. In total, by the end of the year, together with the announcements for the Officers of other specialties, 860 new executives, men and women, and in a three-year horizon 1.080 new executives, will assist the work of the Coast Guard.

3. Institutionalization of a new integrated coherent and detailed system of transfers for the staffing of the port authorities that are so much needed but at the same time the rewarding of the executives who have served selflessly in the difficult areas of the territory.

The Minister noted that in general the new officers of the House will staff the port authorities of the first, second and third category for at least five years.

4. Ensuring the full and complete representation of the officers of the Coast Guard who go to court - civil and criminal - for acts and omissions during their duties and are not prosecuted, with provisions that ensure an advance and all legal and court costs .

5. Regulation of a chronic problem of our executives both in mainland Greece but mainly in the border that concerned the prescription of their drugs. Now, every member of the Coast Guard can get his medicines from the pharmacies that are contracted to EOPYY throughout Greece and not only from the military pharmacies.

6. Return of the responsibility of the Coast Guard to the seashore and the beach to the Greek Police.

Regarding the equipment and strengthening of the House, the Minister of Shipping said that projects worth 800 million euros have been launched.

Qatar Airways announced today that it will not allow passengers from South Africa, Zimbabwe and ...
Read more

Mauritius will suspend all commercial passenger flights from South Africa from November 28 due to the new variant of the coronavirus, the ...
Read more
COVID-19

South Africa said today that it is being punished for its advanced ability to detect new variants of the coronavirus in time as the travel restrictions that ...
Read more
News Bulletin Athens 9.84

The new strain of the coronavirus, named Omicron, has sounded the alarm all over the planet. This mutation appeared apart from the South ...
Read more
984

El Mosialos: The Omicron variant seems to cause mild illness

Latest encouraging data from South Africa about the new African Omicron variant of the coronavirus, which so far show that it causes ...
Read more