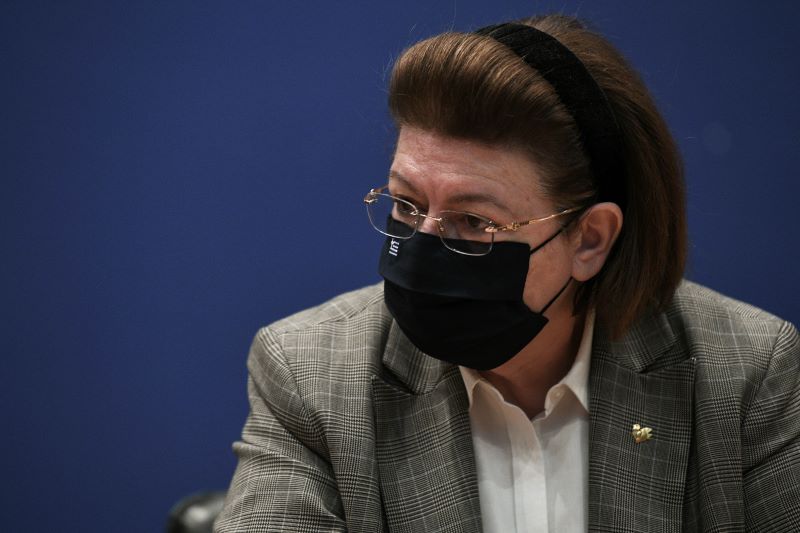 The Minister of Culture and Sports, Lina Mendoni, as an official guest of the Swiss State of Fondation Hardt.

Responding to the invitation of the Association of Greek Ladies of Geneva, the oldest expatriate organization in Switzerland, the Minister attended the official world premiere of the creative documentary of Giannis Smaragdis "Reference to Ioannis Kapodistrias", in the packed hall of the Art Gallery. In her greeting, Lina Mendoni referred to the personality of Kapodistrias and his decisive contribution to the formation of both the Greek and the Swiss State, to the contribution of the Ladies' Association to the constant presence of Greek culture in Geneva, but also to the quality of the director's creations. Giannis Smaragdis, who in recent years has been systematically studying Kapodistrias, as he prepares his film of the same name.

The opening of the exhibition "Geneva and Greece. A Friendship in the Service of Independence ”, organized by the Hardt Foundation in collaboration with the Geneva Museum of Art and History, was the major event of the festivities. An exhibition with rich and important exhibits from the Collections of the Museum of Geneva and other Swiss museums and institutions, supplemented by objects from Greece, the National History Museum, the Museum of Philhellenism, the Museum of Kapodistrias, as well as private collections. At the same time, for the first time the Collection of Antiquities of Anna and Jean Gabriel Einar was exhibited, in order to make absolutely clear the relationship of the philhellenic movement with Greece, the matrix of classical antiquity. There are two excellent exhibitions with important, and largely unknown, facts about the friendship that connected Ioannis Kapodistrias with the prominent banker Eunar and the baron, representative of Geneva, at the Congress of Vienna, Charles Pictet de Rochemont, as well as their essential contribution in support of the newly formed Hellenic Republic, highlighting the close historical relations between Switzerland and Greece.

As Lina Mendoni stated in her speech at the opening ceremony, "these three prominent European figures, who embraced common pioneering ideas and were inspired by the same values, played a decisive role in the formation of the modern states of historical legacy, at the same time laying the foundations of a sincere friendship between the two peoples, which remains strong and unchanged to this day Κα Kapodistrias strongly and effectively supported the independence and neutrality of Switzerland, and Pictet de Rochemont became a hospitable ground for Kapodistrias himself, but also one of the most important centers of philhellenism and support of the Greek liberation struggle, with numerous philhellenic committees being established in many cantons… Geneva banker Jean-Gabriel Eynard emerged as his philhellenic movement, throughhis participation in the establishment of the National Bank of Greece, as a supporter of the organization of the newly formed Greek State. A State, which Ioannis Kapodistrias in his short term as the first Governor - before falling victim to the intense ideological and political turmoil of the period - took over, despite the great difficulties, and succeeded in consolidating and expanding to modern, but also European bases with a wide range of measures in the fields of public administration, military organization, economy, justice, education, agriculture ".

The inauguration, in which absolutely all the health protocols were observed, was honored by the presence of the Director of the Federal Office of Culture of the Swiss Confederation Isabelle Chassot, the member of the Conseil d'État of the Republic and the Canton of Geneva Thierry Apothikos of Geneva Geneva and City Mayor Sami Kanaan, the President of the Hardt Foundation and former President of the Swiss Confederation Paschal Couchepin, the director of the Hardt Foundation Professor Pierre Ducrey, the Metropolitan of Switzerland Maximos. Also present were descendants of Einar, Pikte and Kapodistria, members of the Greek community and many guests from Greece and Switzerland.

A similar theme with emphasis on the phenomenon of Hellenism was the day organized in the amphitheater of the Museum of Art and History in Geneva by the Museum and the Hardt Foundation, with the participation of many distinguished speakers, and which was prefaced by the Minister of Culture and Sports.

During her visit to Geneva, Lina Mendoni visited the Orthodox Center of the Ecumenical Patriarchate in Sabezi. The Minister of Culture was welcomed and guided in the facilities of the Center by its Head, Metropolitan Maximos and his associates. In the discussion that followed, the possibilities of enrichment of the Museum of Christian Art of the Ecumenical Patriarchate were examined by organizing periodic exhibitions in collaboration with the Ministry of Culture and Sports, as well as the provision of know-how in matters of preservation and documentation of the exhibits.

The online platform for submitting applications for child benefit (A21) opened today. Beneficiaries of the Allowance who have not yet applied for ...
Read more