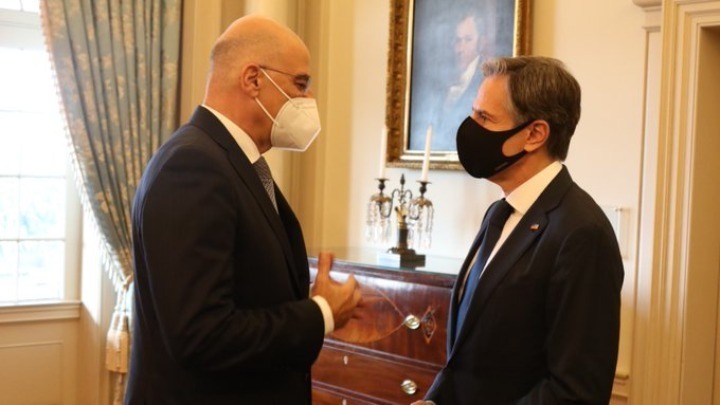 According to diplomatic sources, the first bilateral working meeting of the Minister of Foreign Affairs Nikos Dendias with his American counterpart Anthony Blinken took place in an exceptional atmosphere, while, as they stressed, it lasted longer than originally planned.

During the meeting, the US Secretary of State spoke positively about the leading role, as he characterized it, of Greece, which is based on common values ​​with the US and is strengthened with other countries that embrace these values ​​(like minded countries).

He also referred to the meeting he had the day before with the ministers of Israel and the United Arab Emirates, on the occasion of the one-year anniversary of the Abrahamic agreements.

For his part, the Greek Foreign Minister underlined the values ​​and principles that have governed Greek foreign policy over time and stressed the strengthening of relations with countries beyond the immediate neighborhood of Greece, such as India and Australia, which, as well as Greece, are committed to the implementation and respect of International Maritime Law, said the same sources.

Mr. Dendias also referred to the strengthening of the 3 + 1 scheme (Greece, Cyprus, Israel and the USA), which could be transformed into a four-party cooperation scheme, and possibly a multilateral one with the inclusion of other countries in the region, such as the United States. United Arab Emirates and Egypt.

On the occasion of the signing of the amendment to the Mutual Defense Cooperation Agreement, the American Foreign Minister spoke about a "special relationship" between Greece and the USA.

He also noted that this agreement will facilitate the expansion and deepening of the bilateral strategic partnership.

He added, on the occasion of the recent agreement with France, that the US is very satisfied with the fact that Greece supplies its defense equipment within the "NATO family".

Mr. Dendias, for his part, underlined Greece's particularly close ties both with the United States and within NATO.

He added that the agreement with France strengthens European defense and security, while strengthening the transatlantic link through a more balanced burden-sharing.

He stressed that Greece respects and implements its commitments to NATO, such as the amount of defense spending (over 2% of GDP).

The discussion then focused on developments in the Eastern Mediterranean, the Middle East and North Africa, as well as the Western Balkans.

In this context, the Foreign Minister briefed his American counterpart thoroughly on the Turkish provocative behavior, showing him relevant maps.

He stressed the threat of war that Turkey is bringing back to the fore more and more often (casus belli) as well as the Turkish-Libyan memorandum.

Mr. Dendias remarked that apart from the fact that the above violates fundamental rules of International Law, they do not fall within the framework of common sense.

Under these circumstances, the scope for reconciliation with Turkey, and as long as the latter does not change its position, remains very limited, he added.

The Foreign Minister also referred to the uncompromising stance of Turkey and the leader of the Turkish Cypriots, which does not leave much room for optimism for a solution to the Cyprus problem.

He also spoke in detail about the strengthening of Greece's ties with the countries of the Middle East and North Africa, as well as the stabilizing role that Greece plays in the Western Balkans.

Finally, the American side expressed its special satisfaction for the prospect of our country becoming an energy hub that will supply natural gas to South-Eastern, but also Central Europe.