Ch. Zerefos: In a few hours many areas received 1/3 of the annual rainfall 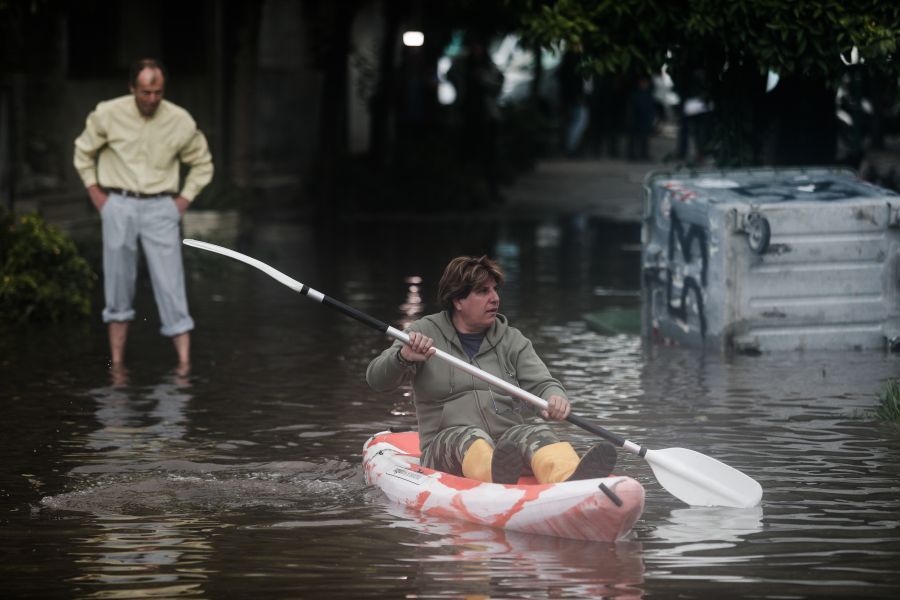 The frequency and intensity of extreme phenomena has increased significantly in recent years, making more and more people turn their attention to climate change and consider the consequences that scientists had warned about decades ago.

Sudden changes in the weather, large changes in temperature from day to day, prolonged drought and heavy rainfall of great intensity but short duration are some of the features that shape the weather in recent years. The downpours are more severe and the heat waves even hotter.

"We have more often more extreme phenomena and more intense. For example, Thursday's rainfall in some parts of the country in just a few hours is 1/3 of the total rainfall that falls annually. This is an extreme phenomenon. A heat wave like the one we saw in the summer all over Greece lasting more than ten days is an extreme phenomenon. We have been seeing extreme phenomena for at least the last 30-40 years. Before they existed but their duration and intensity were not the same as what we see now "emphasizes in APE-MPE the academic and representative of Greece for Climate Change, Christos Zerefos and adds:" The heat waves before 1987 lasted a couple of days and were not as hot as that heatwave, the heatwave of 2007 was even worse and of 2021 even worse. The increase of these phenomena is not marked by linear progress but much faster ".

The phenomenon of rapid change of extreme weather phenomena is not a Greek phenomenon, as climate change is happening on the planet as a whole. If man does not take action, as scientists have been asking for years, extremism will become commonplace and when that happens then we have no way back, as Mr. Zerefos warns.

"If we do nothing, there are estimates of a decrease in rainfall in our country as a whole, which can reach 15%, but this does not mean that there will be no extreme rainfall like the one we experienced on Thursday. In fact, these will be more frequent and with greater intensity as the years go by ", points out to APE-MPE the internationally renowned Greek academic.

However, these downpours are not enough to cover long periods of drought, scientists say, as the total volume of water falling in the Eastern Mediterranean is projected to fall by about 15%.

In order not to endanger their lives in the face of these wild weather conditions, citizens must change their daily philosophy, as the world in which they live changes, scientists have been warning for years.

"Citizens need to adapt to the new destabilizing climate. This means that when we have a job that we can postpone and we have been warned that extreme weather events will occur we avoid being exposed to it and not leaving our home. Preventive treatment is the best. Second, we do not compete with nature. The stream that we cross with our car every day especially if we are in the countryside can become a torrent and no vehicle can withstand a torrent when its depth is greater than 40 cm. In addition, when we swim or are in the countryside and lightning strikes we look immediately to enter immediately in a closed space so as not to be struck by lightning ", underlines Mr. Zerefos.

Prevention and self-protection are two basic principles that we must respect in order to survive in the new environment in which we live, as Mr. Zerefos says. "At the same time, the houses must be better insulated, no permits must be given in streams or near streams. "These permits are not normally given, but many are arbitrary and then legalize the arbitrary, at which point they legalize a death contract with the first big bad weather that will hit their house", he also points out.

Scientists around the world say that there are no magic solutions and even at the last minute they are calling for some measures to be taken to protect citizens.

"On the part of the state, the drainage of rainwater must be better organized, which especially in our country has large sloping surfaces, has a complex topography, has anarchy in construction and thus creates many obstacles to the drainage of rainwater and in general there are many things that still need to become. "The emergency number that was established and the complete reorganization with the help of the army and the fire and other services are in the right direction. I think that everything should be guided by one word: prevention", says Mr. Zerefos.

According to the general instructions of the Civil Protection, when there is a warning for extreme weather events:

-Make sure you are constantly informed by radio and television about the evolution of weather phenomena. The official sources of information are the National Meteorological Service (NMS) and the General Secretariat for Civil Protection.

-Place the above essential telephone numbers in a prominent place in the house if your children are able to use them and make sure they know it.

-Help your children memorize family information such as their last name, address and home phone number.

-Explain to all family members how and when to turn off the electricity, gas and water, how to use the fire extinguisher and how to call for help.

-Take care especially for children and the elderly.

Countdown for the start of the renovation works of Panepistimiou Street. The first works will start at 03.00 in the morning, between the streets of America ...
Read more