Merkel: Ankara-Berlin relations will continue, with their pros and cons 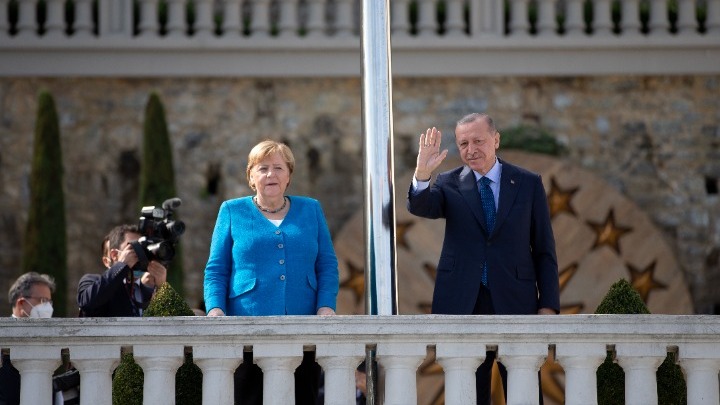 Thanks from both sides and some criticism: German Chancellor Angela Merkel said goodbye for the last time today to Turkish President Recep Tayyip Erdogan, an "important partner" whom she often defended within Europe, without hiding her criticism. of human rights.

The chancellor, who is making her farewell tour after 16 years at the helm of Europe's largest economy, had been invited to dine with Erdogan at Therapia, one of the most impressive presidential residences on the Bosphorus.

"Sometimes I was critical of the developments we were following in the area of ​​human rights and civil liberties," he told a news conference after the meeting. "The only thing I can tell you is that the same will happen with the next German government: Turkey's relationship with Germany will continue, with its good and bad sides," he added.

For his part, Erdogan, who twice thanked his "dear friend" Angela Merkel, voiced his concerns for the future in advance: "It is never easy to work with a coalition" like the one negotiating on for the formation of a government in Germany, he estimated.

For the past 16 years, despite sometimes serious, political disagreements or even tensions, such as the one after the failed 2016 coup in Turkey, Merkel has always kept the Berlin door open for Ankara and prevented it from closing. Europe its own. Germany, home to about three million people of Turkish descent - according to the latest official estimates - has repeatedly intervened in favor of Ankara as Turkey's relations with the EU deteriorated. It has also played an important role in reaching an agreement between Brussels and Anchor on immigration, with the EU offering six billion euros to Turkey to keep migrants in its territory.

Erdogan said today that his country has become a "hostel" for refugees, hosting more than 3,5 million Syrians and about 300.000 Afghans.

Chancellor Merkel welcomed this "important project" and assured that "European support for Turkey will continue". "Because we want to put an end to human trafficking, EU support is needed: we have already given 4,5 of the 6 billion euros agreed," he said.

Germany's special relationship with Turkey, which depends heavily on Merkel's personality and prestige on the European stage, could be jeopardized by the new government she will take over in Berlin, says Guenter Seifert, a researcher at the German Institute for International Affairs. and Security.

The two leaders certainly had "difficult personal relationships on many issues but they always managed to maintain an atmosphere of cooperation and work. "Germany never closed its door, it always left a channel open", the researcher commented, speaking to the French Agency.

Thanks to Merkel, Turkey's relations with Germany have remained better than with the United States or France. But the future is clearly predicted to be more difficult for the two countries, especially in terms of immigration management, Seifert predicted. "Whoever the new chancellor is, he will not have the prestige and weight of Merkel on the European stage. "It will therefore be more difficult for him to coordinate European policy as she did."