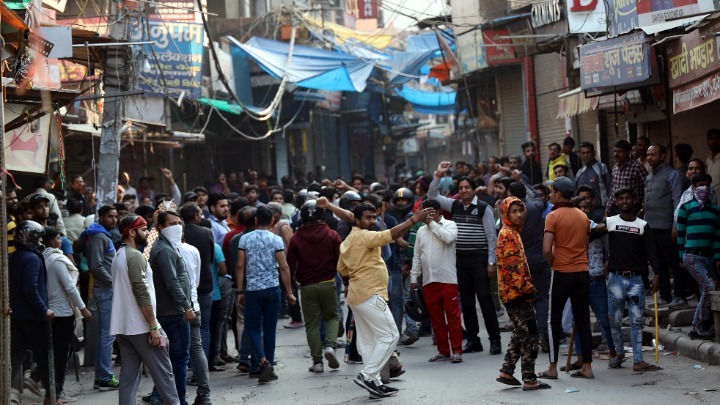 At least eight people were killed Sunday in northern India in episodes during a farmers' protest against the federal government of Narendra Monti for almost a year, authorities told Indian media.

The incidents broke out around the cars of the ministerial convoy. According to farmers, one of the cars in which his son Ajay Misra was riding crushed four protesters, killing them.

The incident increased the anger of the farmers, who attacked cars of the convoy and set some on fire. Four other people, riding in one of the cars, were beaten to death in the violent incidents, according to farmers present at the mobilization.

"Eight people were killed (…) in Lahibur. Of those, four were farmers and four were inside cars, "said Uttar Pradesh State Police Chief Mukul Goel, speaking on CNN-News18.

Ajay Misra denied the farmers' allegations, telling the press that protesters attacked the convoy and killed a driver and three employees of Baratiya Janata (BJP, "People's Party of India"), who governs the state of Uttar Pradesh, and is also the faction of Prime Minister Narendra Modi.

The Prime Minister of Uttar Pradesh, Yogi Adatatat, described the incidents as "very sad and unfortunate", calling for calm.

"Before rushing to conclusions, one must wait for the investigation to be completed and the measures to be taken," he said via Twitter last night.

Internet access was cut off in the area. Roads leading to Lucknow, the capital of Uttar Pradesh, were closed to prevent a new outbreak of violence, according to the press.

Leaders of the opposition and trade unions had announced that they would go to Lahibur Kerry.

The reforms voted in September 2020 give farmers the opportunity to make their products available to buyers of their choice and not to focus exclusively on state-controlled markets. They guarantee a minimum selling price for some products, especially food.

Since late November, farmers have opposed the so-called market liberalization and have blocked roads to New Delhi. The mobilization of farmers is considered one of the biggest challenges facing the government of Narendra Monti and the nationalist Hindu BJP since coming to power in 2014.

The burden of the agricultural sector is high in India: it guarantees the survival of almost 70% of the subcontinent's 1,3 billion inhabitants and contributes about 15% of GDP.

The new measures taken by the government to prevent the risk of mutation that occurred in Botswana were announced by the Ministry of Health. Specifically, regarding ...
Read more
SPORT CITY

The Men's National Team arrived in Thessaloniki and started its mini preparation for the home match against Belarus, with ...
Read more
CIVILIZATION

Wind farm at the National Theater: A mosaic of memories, stories and tales from the East

A show-recollection of the childhood innocence but also the memory of the separation from the birthplace of Asia Minor a few years before the Great Catastrophe, from which this year marks 100 years. The...
Read more
ECONOMY

The new variant caused a drop in the European stock markets

The European Stock Exchanges closed today with a big drop, due to the fear caused by the new variant of the coronavirus and the concern that it will lead ...
Read more
SPORT CITY

World Cup draw - Will be left out of Italy or Portugal

What happened ... the last two European champions were trembling. Italy was drawn with Northern Macedonia and Portugal with Turkey, but on ...
Read more
SPORT CITY

Cup: Panathinaikos bears the costs for the VAR with Volos

Panathinaikos made it known through a letter to EPO and KED that it undertakes the expenses for the VAR in the Cup match with Volos.
Read more
984

WHERE: "Variation of concern" the new executive - Named "Omicron"

The committee of experts of the World Health Organization that met today to evaluate the new, mutated strain of the new coronavirus found in the South ...
Read more