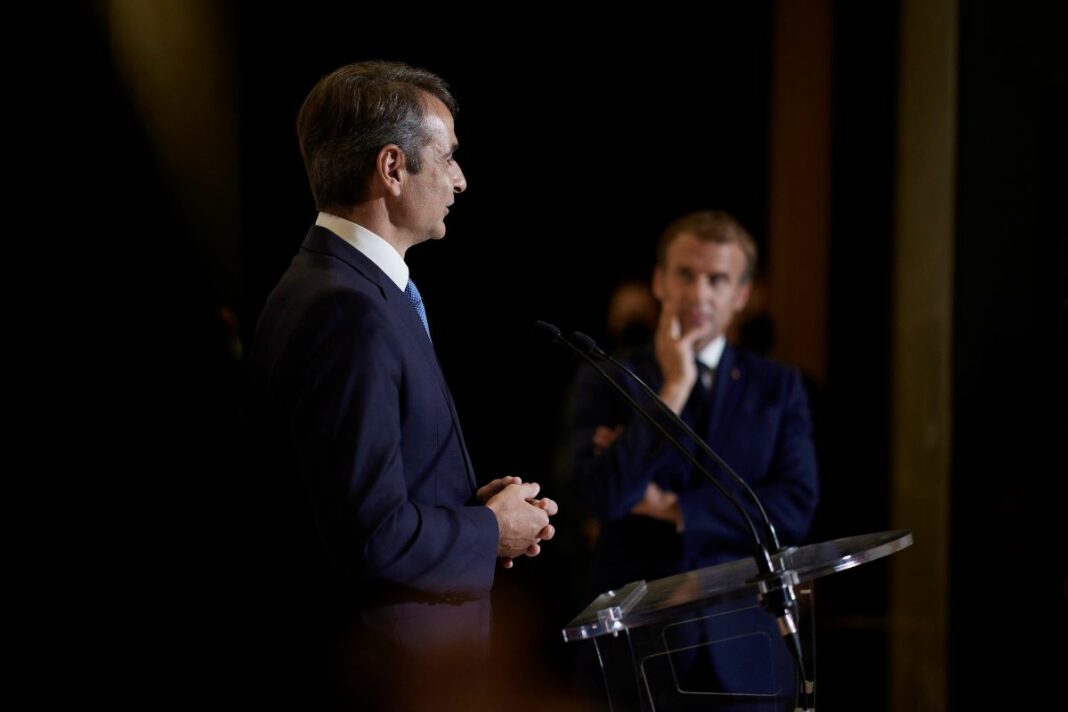 At 09.00 in the morning (French time) the joint statements of the President of France, Emmanuel Macron and the Prime Minister Kyriakos Mitsotakis will take place from the Palais des Elysées. Speaking yesterday on ERT's main news bulletin, Mr. Mitsotakis, for his part, recommended patience until today's announcements on the defense agreement between the two countries, noting, however, that "we are heading towards a substantial deepening of the Greece-France strategic cooperation."

Macron's proposal for a Euro-army is "mature"

The Prime Minister pointed out that what he can say is what he had the opportunity to mention in his speech at the UN in New York, "that the demand for Europe's strategic autonomy is now absolutely imperative. In other words, a Europe that will align its geopolitical power with its economic power. I believe that both Greece and France are two countries that will be at the forefront of this European effort in the coming months, in the coming years, which I emphasize is not an effort that in any way undermines Euro-Atlantic relations, nor NATO.

"The stronger Europe is defensively, the more it will eventually have to contribute to NATO," he said.

The Prime Minister added that "it is imperative that they coexist but again one can think of missions possibly in the Middle East, in the Sahel, which we are so interested in and Greece and France, in the eastern Mediterranean, EU missions in which not even the NATO or the UN.

Asked to comment on Emanuel Macron's proposal for the creation of a European army, Kyriakos Mitsotakis replied that "it is a mature proposal. Because it recognizes the complexity of international relations and the fact that we Europeans have a substantive responsibility to deal with the security of our region. I emphasize that the Euro-Atlantic alliance is the central defense pillar that will always unite the two sides of the Atlantic. But Europe has an obligation to be able to act autonomously if it so wishes. "Without necessarily needing the permission or consent of anyone else if the Member States of Europe consider that there are vital interests of Europe, therefore of its Member States, which Europe must defend."

Greece stressed that it will participate at a very active level, emphasizing that "we can not ask for European solidarity without having an expression of solidarity in other EU member states."

"We must use this power for the benefit of Europe," he said, referring to the interoperability of weapons systems.

Regarding the decisions of Europe regarding the provocation of Ankara in the Eastern Mediterranean, he said that they are the least common denominator but they are important because they set the framework and now the Greek-Turkish relations have become Euro-Turkish.

"Countries like France offered tangible support through a French military presence. "There is no national loneliness," he added.

Mr. Mitsotakis referred to the international presence of the country and said, among other things, that the opinion of Greece measures in Europe. "We are a country with confidence and confidence in its potential," he said, adding that as he had said, "we will have a quiet summer in the Aegean, we will have a quiet autumn and winter."

He also stressed that Greece is defending its sovereignty and sovereign rights and said that he prefers to see the glass half full.

He noted that we can cooperate with Turkey, while on the difference we have in the delimitation of maritime zones, he stressed that the only tool we have access to is international law.

"Turkey knows our borders, which are also the borders of Europe," he added, adding that "Greece has an obligation to strengthen its deterrent capability."

"I am not in the mood to enter an arms race," he continued, noting that he has a responsibility to hand over the Armed Forces more powerful than he undertook.

"Greece is a country whose opinion counts today"

The Prime Minister stressed that "we can not demand European solidarity without ourselves being willing to participate in European efforts, to express solidarity with Europe, or with other Member States.

An active foreign and defense policy requires that we not only ask for support but also be able (I remind you that Greece is a country that spends more than 2% of its GDP on defense) to use this power of ours for the benefit of Europe. .

Another major debate in Europe is the debate on the interoperability of weapons systems. We chose e.g. to Buy Rafale Aircraft from France | This means that our cooperation with France or with other countries such as Croatia, which also acquires Rafale aircraft, will be much easier because we will use common weapons systems.

He also pointed out that if we have achieved anything in the 26 months of being a government "it is precisely to build a grid of alliances which is extremely multidimensional and at the same time strong. Excellent relations with the United States, European involvement in the Eastern Mediterranean, new alliances with Middle Eastern countries such as the United Arab Emirates and Saudi Arabia, strengthening our alliance with Egypt. We are starting to have a presence in Africa, we have also made great openings to India Ελλάδα Greece is a country whose opinion matters today. Counts in Europe are at the forefront of tackling challenges such as climate change with bold policies that have caught the attention of all countries interested in tackling this great challenge. In other words, it is a country that has self-confidence and confidence in its potential. "

Immediately after his return to Greece, Mr. Mitsotakis will go to the areas of Crete affected by the earthquake.