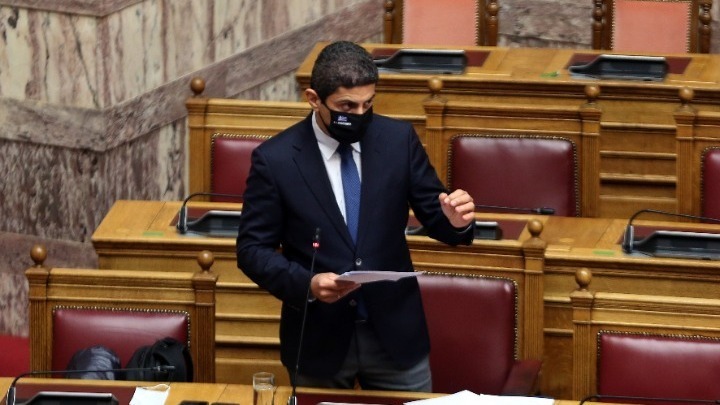 "We are proud because, in just two years, our sports reform has begun to bear fruit and we have changed the landscape in the field of sports for the benefit of the sports family, supporting in practice and our athletes," said the Undersecretary. Of Culture and Sports, Lefteris Avgenakis, answering a relevant Question of MPs Kyriakos Velopoulos, Apostolos Avdelas and Konstantinos Hitas on amateur sports.

Mr. Avgenakis briefly pointed out the dozens of measures that have been taken for the benefit of amateur clubs and athletes, emphasizing that in less than two years, about 55 million euros have already been paid to support amateur sports and will soon be given to clubs and the advance payment from the new way of taxing the betting profits, a timeless request that was introduced for the first time in our country.

In detail, the Deputy Minister of Sports stated:

"From the first moment of our term, we put at the center of our policy the athlete and the club, that is, the cell of sports development.
In the context of the sports reform, which we have been implementing for the last two years and more, we have designed and implemented a series of measures for the substantial support of our athletes.
Examples include:
- We have introduced the mandatory participation of a representative of the athletes in the Boards of their Federations, with the right to vote.

- We have allowed athletes to obtain a coaching license and be able to coach teams competing in a category other than their own, of the opposite sex or academies.

- We released the transfers of amateur athletes at the age of 19, so that they can choose the club with which they will play.

- We took care of the insurance of amateur athletes in e-EFKA from the risk of accident and for sickness benefits in kind, directly or indirectly, if they are not covered by other insurance.

- We have extended the validity of the award of the status of Reserve for classification in the Armed Forces and for active athletes, without time limit or deadline.

- We facilitated the attendance of athletes, so that they can combine studies and sports career, doubling their study time as part-time students, something that:
Ει helps them to continue their athletic career at the same time as studying without having to give up either one or the other,
Ωθεί promotes the concept of dual career for athletes, which is an international trend.

- We have established the Register of Sports Clubs in order to register the legally operating amateur clubs.

- We paid about 13,5 million euros as financial aid / special purpose compensation, to deal with the consequences of the pandemic, for the first time after 12 years directly to 4.691 legal amateur clubs, registered in the Register of Sports Clubs of the GGA.

- We have developed the evaluation program of "CHILON" Federations, based on dozens of fully measurable indicators of activity, based on which the state subsidy is distributed with meritocracy, transparency and objective criteria, including the number of athletes of the National teams and the number of days prepared. .

- We have predicted that the National Teams will be financed separately, from the beginning of 2022, up to the amount of € 15.000.000, from the gambling tax profits and this is happening for the first time in our country.

- Tax incentives were given by reducing the amount of tax by 20% from 10%, which was valid, on the amounts of donations to amateur sports clubs.

- All amateur clubs and their employees joined the Support Measures of the 1st and 2nd phase of the pandemic.

- The sports facilities remained open throughout the pandemic to prepare the athletes who had qualified or qualified for the Olympic and Paralympic Games in Tokyo, according to the lists sent to us, upon our timely request, by the Greek Olympic Committee and the Hellenic Paralympic Committee.

- With our actions to the Vaccination Committee and the Civil Protection, the athletes of National Teams were vaccinated as a priority, so as not to disrupt their preparation and participation in the Olympic and Paralympic Games.

- We paid the bonuses of distinguished athletes and coaches for 2017, amounting to € 2.666.000. It should be noted that the previous government had spent this funds elsewhere.

- We increased the 196 secondments of Federal coaches for 2019 to 204 last year and 213 this year, with the cooperation of the Ministry of Education.

- The National Center for Sports Research (EKAE), a scientific body of the Ministry of Sports based in OAKA, is in the process of digital transformation with the main goal of strengthening and supporting athletes. Indicatively, it is foreseen:
Ø the creation of a medical database,
Ø digital diary of training, nutrition and psychology of the athlete,
Ø digital athlete health card etc.
In addition to the above, it is worth noting that the responsibility for setting up, training / preparing, daily allowance, insurance and participation in any international event of our national team athletes, team or individual sports of all genders and ages belongs to sport.
Especially for events that host many different sports, such as the Olympic and Paralympic Games, the Mediterranean Games, the Youth Games, etc., the final responsibility lies with their respective domestic bodies, such as the Hellenic Olympic Committee (EOE), the Greek Paralympic Commission (Ltd.), where the Sports Federations are members.
The role of the State concerns the annual regular and extraordinary grants of the Federations, of the bodies such as EOE and EPE and in the direct aids of the unions, aids that returned after 12 years!
For 2020 and 2021, which were Olympic Years, a TOTAL 50 million euros were paid (more than 36 million euros to the Sports Federations and almost 13,5 million euros to 4.691 amateur clubs, legally registered in the Register of Sports Clubs of the Ministry Sports).
In addition, 31 million euros were paid months ago in professional sports (men's soccer -Super League 1, Super League 2, Football League-, men's basketball -Basket League, men's volleyball -Volley League) as an advance from their entitled percentage of according to the new way of gambling gambling taxation.
It has also been announced since March 2021 that in the autumn of 2021 (in the near future) the clubs will be given a generous advance by the new way of taxing the winnings of the gamblers.
Besides, for the first time Greek sports acquires a share of the taxation of the profits of the betting players and this is distributed by 50% in professional and amateur sports.
We are proud because - in just two years - our sports reform has begun to bear fruit and we have changed the landscape in the field of sports for the benefit of the sports family.
We actively support our athletes.
And we are continuing our sports reform to further improve conditions and even greater support for the sports building. "