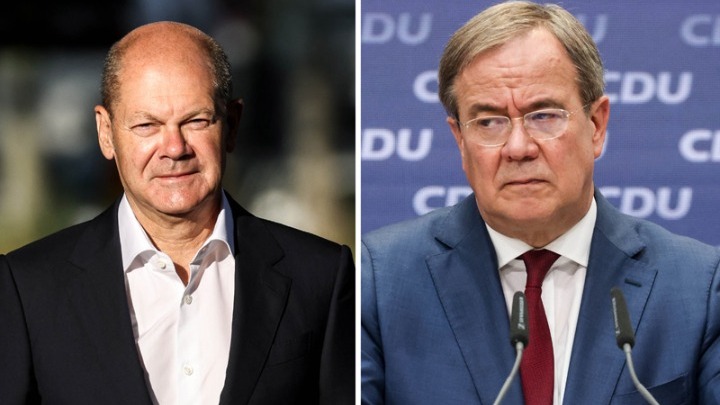 Less than 24 hours before the German federal election opens, the two most likely candidates to succeed Angela Merkel as chancellor - Olaf Solz (SPD) and Armin Lasset (CDU) - will make their final appearances. .

According to the latest polls, the difference between them is small, with the percentage of the Social Democrats (SPD) being around 25% and the Christian Democrats (CDU) between 21% and 23%.

Merkel, who has led Europe's largest economy for nearly 16 years, is backing Lassett's candidate and will appear at his rally in Aachen, North Rhine-Westphalia.

Yesterday, the outgoing chancellor was on the front line of a pre-election meeting in Munich, from where he called on the Germans to vote for Lassett, who will guarantee "stability" in Germany.

For his part, Solz will make one last election appearance today in the state of Brandenburg.

Greens candidate Analena Berbock has completed her election campaign. With her party now in third place with about 15% of the vote, Burbok has no chance of running for chancellor. But the Greens are expected to improve their stance in this election and possibly run in the new coalition government to be formed in Germany.

Most analysts expect three parties to join the government, although it is unclear who they will be.

If the CDU eventually manages to take first place, the new governing coalition will be center-right.

On the contrary, if the SPD prevails, Germany will make a turn, more or less, to the left depending on the parties with which Soltz decides to work.

Another option is to continue the "grand coalition" between the Christian Democrats and the Social Democrats.

The General Authority of Civil Aviation of Saudi Arabia, announced that it has started the full operation of the airports of the kingdom, both for the international and ...
Read more
IT HAPPENS IN ATHENS

The 4th Municipal community in the area of ​​Kolonos was today at the center of the cleaning and disinfection operation by competent teams of the Municipality of Athens, in ...
Read more
News Bulletin Athens 9.84

A net benefit of more than 4,5 billion euros will emerge in the next eight years from the electrical interconnections of Crete, the Dodecanese and the islands ...
Read more
984

The man who was arrested after the stabbing to death of the British MP David Ames on Friday, had made an appointment to see the MP, ...
Read more