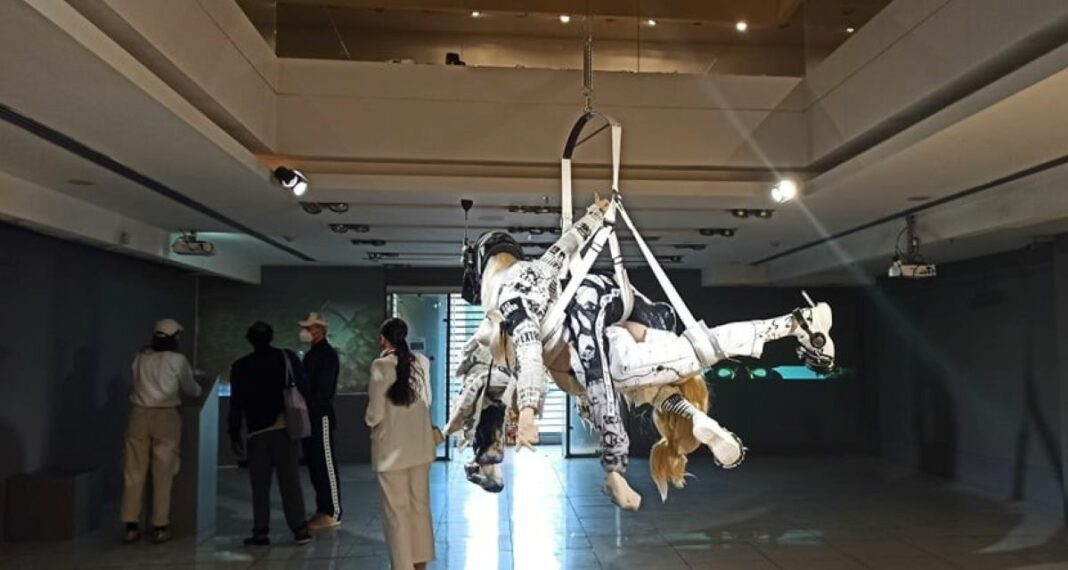 The press conference and the pre-opening of the officials of the 7th Athens Biennale ECLIPSE, took place yesterday (23.09) at the Book Gallery. The goals, the new perspectives and collaborations, the places where the exhibition will be spread were presented by Poka-Yio, founding director of the Athens Biennale, Aphrodite Panagiotakou, director of culture of the Onassis Foundation and the co-curators Larry Ossei-Mensah and the representative of the Omsk Social Club.

The 7th Biennale was prefaced by Deputy Minister of Culture and Sports in charge of Contemporary Culture, Nikolas Giatromanolakis who stated, among other things:

"This year's approach with the participation of many artists from different places essentially gives a character to Athens, which, although a European capital, does not have the weight of the colonial past and this gives it a freedom. Also, although Mediterranean, it does not have the stigma of Orientalism ".

Ο Mayor of Athens, Costas Bakogiannis referred to the need for creation that can not be stopped by a single pandemic. Describing the Biennale as one of the biggest artistic events in the city, he spoke about the opportunity of Athens to re-establish itself not only in the outside world but also in us, its inhabitants. 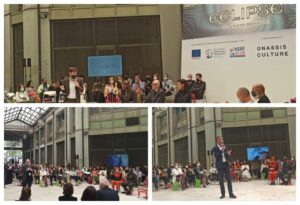 ECLIPSE activates three iconic ghost buildings in the heart of the city, reflecting the transitions of the Athenian capital to different historical periods.

-The architecture of the Schliemann-Mela Palace attempts to give the identity of the modern Greek state at the end of the 19th century.
-The Former Courts of Santarosa, one of the most emblematic buildings erected with the founding of the new Greek state, functions as the center of the array of AB7: ECLIPSE exhibition spaces.
-The former Fokas Shopping Center functions as an omen of a possible post-capitalist era.

The Program of the 7th Biennale

Η Athens Biennale announces its seventh event, entitled ECLIPSE (EXCLUSION), co-curated by the Omsk Social Club and Larry Ossei-Mensah, under the artistic direction of Poka-Yio. ECLIPSE takes place in different parts of Athens from September 24 to November 28 (pre-opening: September 23) and includes artists based in North and South America, the Caribbean, Africa and Europe, many of whom are going to exhibit in Greece for the first time.

The title of the report highlights the increasingly vague perception we have of reality due to a state of constant liquidity that we are experiencing today. THE ECLIPSE deals with the social, political and spiritual changes that are taking place worldwide and in Athens itself, a rising metropolis located at the meeting point of Europe, Asia and Africa, both geographically and historically. The eclipse is a phenomenon of overlap and blackout but also a cosmic phenomenon. The experience of the eclipse acts as a catalyst for reprocessing an unresolved past that can fuel an unspoken present to ultimately contribute to shaping the future. Athens thus functions as the most appropriate point of surveillance of the manifestations of time and place but also of the question: Is the West in decline or at a time of significant transformation? ECLIPSE seeks to address issues of identity, history and cultural complexity by providing a platform for exploring ideas, questions, concepts and desires that often do not find a place in a Biennale. In an effort to spark a dynamic intercultural dialogue, ECLIPSE highlights works by artists from the African Diaspora as well as other historically marginalized artists. Through this "Black Prism" an attempt is made to capture different visual and artistic practices of the African diaspora.

The intercultural dialogue is complemented by artistic interventions that compose experiential narratives, aiming to activate the spectators' imagination and the birth of potential parallel worlds and possible versions of the future. Composing a sequence of spaces that give rise to ideas such as "radical care", "biodiversity friendship" and "sound vision" strategies, ECLIPSE presents a local, contemporary approach to alternative ways of coexistence.

Opposing the dominant power relations that shape historical narratives, ECLIPSE proposes the destruction of repressive mechanisms and outdated idealisms. Using a range of experiential media such as live action games, groundbreaking techniques of spreading rumors, persuasion, "emotional hypnosis" but also a variety of physical, auditory, visual and complex immersion techniques, ECLIPSE enables the construction of narratives, sets the contemplation towards an alternative future. 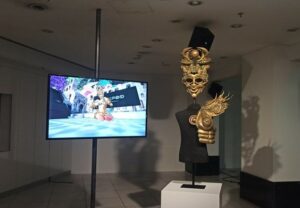 The 7th Athens Biennale is implemented with the co-financing of Greece and the European Union within the framework of the OP. "Attiki" of the NSRF 2014-2020, is under the auspices of the Ministry of Culture and Sports and is held in collaboration with Onassis Culture. AB7: ECLIPSE is organized by the Athens Biennale. 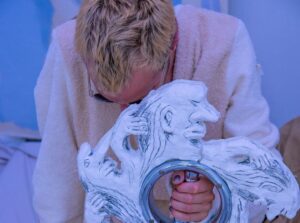 Omsk Social Club (Co-curators)
Omsk Social Clubs use traditional Live Action Role Play (LARP) methods through immersion and Real Game Play (RGP) facilities to subject participants to existential situations that could potentially belong to the realm of fantasy or even a non-realm. still experienced reality. Omsk works closely with spectator networks: everything is unique and takes place without rehearsal. The living installations they create examine the potential ego, the common experience and the political phenomena in a way that allows their works to become the intangible hybrids of a modern culture alongside the personal unique experiences of each participant.

In the past, Omsk Social Club immersion environments have introduced landscapes and themes such as rave culture, survivalism, catfishing, desire and sacrifice, positive trolling, algorithmic strategies, and decentralized cryptocurrencies. They have exhibited throughout Europe and in various institutes, galleries, theaters and venues such as the Martin Gropius Bau, the House of Electronic Kunst in Basel, the Mirgos Museum für Gegenwartskunst in Zurich, the HKW in Berlin, the CCCB in Barcelona, ​​the Volksbühne in Berlin and the Stems Gallery in Brussels. They have been included in the Athens Biennale (2018), the Transmediale Festival (2019), The Influencers (2018) and the Impakt Festival (2018). www.punkisdada.com 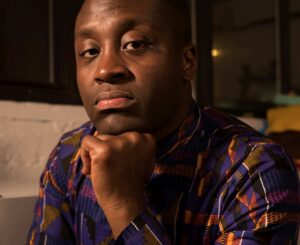 Larry Ossei-Mensah (Co-curator)
Larry Ossei-Mensah uses contemporary art as a vehicle to redefine how we see ourselves and the world around us. The Ghanaian-American curator and cultural critic has organized exhibitions and programs in commercial and non-profit venues from New York to Rome and around the world with artists such as Firelei Baez, Allison Janae Hamilton, Brendan Fernades, Ebony G Patterson, Glenn Kaino and Stanley Whitney. He has also actively immortalized cultural events with the most dynamic visual artists such as Derrick Adams, Mickalene Thomas, Njideka Akunyili Crosby, Federico Somi and Kehinde Wiley. Larry Ossei-Mensah has appeared in publications such as the New York Times, Artsy and Cultured Magazine, which recently named him one of the seven editors to watch in 2019. www.larryosseimensah.com 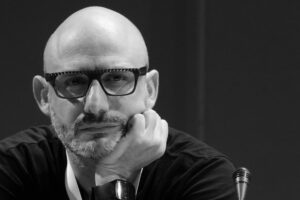 Poka-Yio (Artistic Director)
Poka-Yio lives and works in Athens. He is an artist and curator of exhibitions, Associate Professor at the School of Fine Arts, founding director of the Athens Biennale and head of Visual Culture of the Onassis Foundation. He is a co-founder of the Alpha Station-Athenian Center for Contemporary Art. His practice includes painting, performance, theater, film and art direction, and curating large-scale art projects designed as gesamtkunstwerk. The main theme of his work is the "Attraction-Aversion" dipole in the era of "Culture of Desire".

Annette Contaveit, who is at No. 20 in the world rankings, won the trophy in the international tournament "Kremlin Cup", hosted in Moscow ...
Read more
GREECE

And. Loverdos: If I am elected president, there will be no party mechanisms. It will be an open party at the base

Andreas Loverdos pledged to put an end to party mechanisms if elected to the leadership of the Movement for Change. In his statements on ANT1 television, ...
Read more
WORLD

With supervisors who will control the traffic on the bus lines, but also through the telematics and electronic ticket systems available, the OASA will ...
Read more
GREECE

KINAL: The position of presidential candidates and the first shots from both sides

Start of the internal party pre-election process in KINAL, which in fact is predicted to be harsh. The first central points of the candidates' agenda have already begun to be recorded ...
Read more
GREECE

A bilateral cooperation agreement between Greece and Britain, which will cover a large number of areas, including defense and foreign policy, will be signed ...
Read more