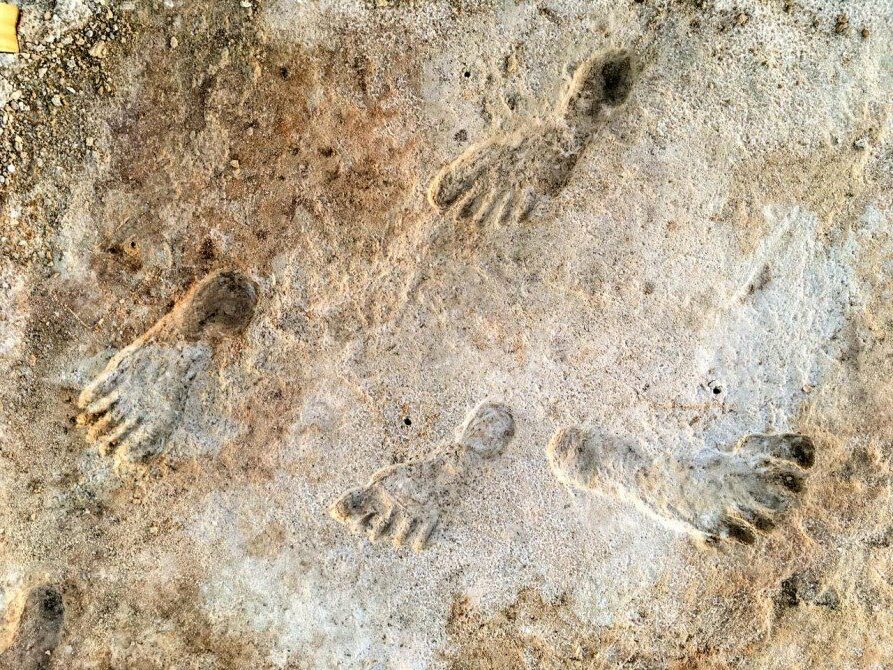 Human footprints dating back 21.000 to 23.000 years and found in the White Sands National Park in southern New Mexico. Judging by their size, it is estimated that these are mainly footprints of teenagers and children, while there are also footprints of animals such as mammoths, wolves, birds, etc.

The footprints, which formed in soft mud on the edge of a then-shallow lake and then fossilized, show that there were people in America earlier than previously thought, even at the peak of the last glacier cycle, before the ice melted. . Until now, the first humans were thought to have entered America from the north about 16.000 years ago, after the ice had melted, making it easier for them to migrate from Asia.

Therefore, the new discovery postpones the first human presence at least 7.000 years earlier and makes it possible that there were waves of migration to America, about which nothing is known to date. It is possible that these early populations disappeared without a trace.

Researchers from the US Geological Survey and US universities (Cornell, Arizona and Bournemouth), published in the journal Science, said the new study provides the first - beyond any doubt - indication of a continuing human presence. in America thousands of years earlier than most archaeologists have thought possible until now. "

In the second half of the 20th century, American archaeologists formulated the prevailing view that the so-called Clovis culture (also named after New Mexico) was the first in America about 11.000 to 13.000 years ago. They were large game hunters believed to have crossed the then icy Bering Strait, which was a bridge between Siberia and Alaska at a time when sea levels were much lower.

From the 1970s, this "orthodox" view began to be challenged, gradually becoming more and more intense, as evidence of human presence began to come to light 14.500 years ago in Monte Verde, Chile, 15.000 years ago in Batermilk Creek, Central Texas. and 16.000 years ago in Cooper Ferry, Idaho, USA. There was also a controversial and ubiquitous study in Nature that claimed that traces of people in California were 130.000 years old.

A burnt car of Attiki Odos and many stones on the road, is the report of the Roma gathering that ended on Attiki Odos at the height ...
Read more
News Bulletin Athens 9.84

A group of people has stopped the traffic on Attiki Odos in the current to Elefsina at the height of Aspropyrgos at the Magoula junction ...
Read more
GREECE

The Minister of Shipping and Island Policy spoke about the ever-increasing Turkish provocation and the management of the immigration issue by our country ...
Read more
GREECE

Mr. Mitsotakis will pay a two-day official visit to Saudi Arabia from tomorrow

Prime Minister Kyriakos Mitsotakis will leave for an official two-day visit to Saudi Arabia. On Monday, the Prime Minister will participate in the Summit of the "Middle ...
Read more