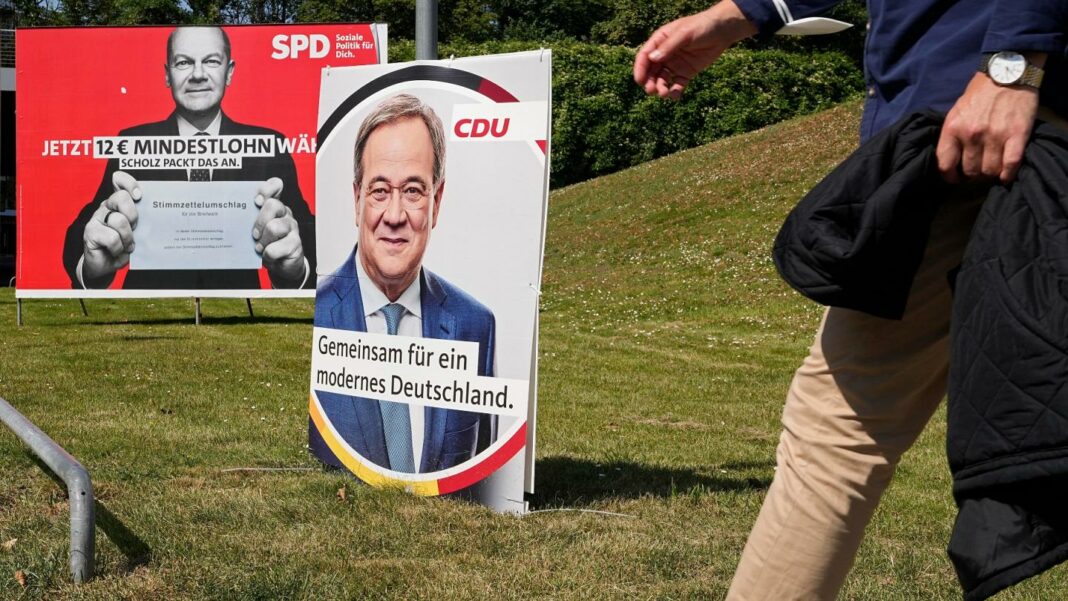 Last night's "Elephant Round", the latest debate between political party leaders in the run-up to Sunday's federal election in Germany, came as no surprise, although for the first time the debate focused on issues that had not been discussed until yesterday. EU, the USA, China and Russia. Regarding the latest polls, the difference between the Social Democratic Party and the Christian Union he's got most limited at two percentage points.

At yesterday's debate organized by the two channels of the German public television ARD and  ZDF all seven political leaders arrived. THE Armin Laser (CDU), The Marcus Zender (Christian Social Union), The Olaf Solts (SPD), h Analena Burbok (Greens), o Christian Lindner (FDP), h Alice Weidel (AfD) h Γιανίνε Whistler (Left) and more not they hesitated to express their preference for post-election collaborations. Mr. Zender into a contrast byArmin Laser Which said that wish government of Center-right , he said, convinced the Union would win the election, and backed a "Jamaican" coalition with the Greens and the Liberals.

Ο Olaf Solts asked voters to decide in his favor as head of the next government, Mr. Burbok limited himself to reiterating that he wanted a "climate government".

Ο Christian Lindner He agreed that "in terms of content" the relevance is greater in a "Jamaica" coalition while the lady Whistler  of the Left objected: "Sir Laser, we will not make you Chancellor and sir Lindner"We will not make you Minister of Finance", implying that he would like a government SPD, Greens and the Left.

One of the moderators of the debate had a heated argument with the lead candidate AfD on the issue of climate. "The party tells you in its election program that the hot seasons have always led to a flourishing of life and culture. "Is climate change having a positive effect?" The journalist asked, causing embarrassment to Alice Weidel, which after a lot of pressure, replied that "climate change has always existed and there is no reason to dismantle our industrial core".

To relieve the climate the participants were called to state what they have given up for the sake of the climate. THE Marcus Zender stated that it took the train from Munich to Berlin and that it has reduced meat consumption - "something difficult for Bavarian», As he said -, ο Armin Laser stated that he does the same, "but somewhat less" and drives an electric car, the Analena Burbok that she travels throughout the election campaign on her party's electric bus, while o Christian Lindner, after stressing that this debate is wrong, as not all citizens have the opportunity to leave some "comfort" because they probably never had it, revealed that he is climate neutral, as every year he pays as many tons of CO2 consumed. THE Olaf Solts He said he buys local products, but acknowledged that the politician's life makes his economy very difficult of CO2, as there are many large escort movements. THE Γιανίνε Whistler that it is transported by public transport when possible. Even the Alice Weidel stated that when it is not necessary the car prefers to travel by bicycle - but more for financial reasons.

Among the issues raised was the "debt brake", which was temporarily suspended to address the economic consequences of the pandemic. Laser and Zender wish to preserve it.

Ο Bavarian The Prime Minister even warned against the development of the EU into a debt union. Intense controversy had Christian Lindner to Alice Weidel, which favored closer relations with China, and o Marcus Zender also with its representative AfD, whom he accused of encouraging his extreme deniers coroner.

Turn Concerns in democratically the difference between the Social Democratic Party has been reduced to two units (SPD) and the Christian Union (CDU/Christian Social Union) two days before the elections. According to the Political Barometer of the second channel of German public television  ZDFThe SPD remains at 25% while CDU/Christian Social Union gain one point and rise to 23%. The Greens win 0,5% and are at 16,5%, the Alternative for Germany (AfD) loses one point and is limited to 10% and Liberals (FDP) and the Left retain their forces, with 11% and 6% respectively.

Regarding the persons of the candidates for the Chancellery, the Olaf Solts (SPDgains the trust of 64% of respondents, o Armin Laser (CDU/Christian Social Union) of 26% and h Analena Burbok of 25%. Respectively, 47% would like Mr. Solts for Chancellor, 20% Mr. Laser and 16% the lady Burbok.

In the same poll, however, the 35% of voters said they were undecided about whether he even wants to vote and which party he would choose.

Whatever the outcome of the German federal election  crystallize This makes it a perfect choice for people with diabetes and for those who want to lose weight or follow a balanced diet. end one of the whole political era during who mesourani η realistic management of Angela Merkel.  The iron lady of Germany ends her 16-year stay at the top of power (the only chancellor since 1949 who leaves at the time of his election and not after an electoral defeat), however her party, the historic Christian Democracy,  is in danger of suffering a dramatic electoral decline.

In Saudi Arabia, K. Mitsotakis - Energy, economy and defense on the agenda

Today and tomorrow, Prime Minister Kyriakos Mitsotakis will pay a two-day official visit to Saudi Arabia. Government sources anticipate that during the activity and the meetings, which ...
Read more
GREECE

Statements and the distribution of student textbooks begin

The declarations and the distribution of the student textbooks of the Winter Semester (25-2021) start from today, Monday 2022 October. The statements will be made by the students ...
Read more
984

The ring returns to the center of Athens after about 2 years of absence. From today Monday 25 October until Friday 22 July ...
Read more
IT HAPPENS IN ATHENS

On the occasion of the World Breast Cancer Day on October 25, the Municipality of Athens, through the Directorate of Municipal Clinics and Public Health, ...
Read more
6. THE BOOK OF THE WEEK

"The Sound of Birds" by Sebastian Fox

"It would fall like the millions who died in the mud: bakers' assistants from Saxony, farmers from France and factory workers ...
Read more
984

Barrage of crews from today for pensions and allowances

About 2,3 billion euros to at least 4,8 million beneficiaries will be paid from today until Friday by EFKA, OAED and ...
Read more
COVID-19

The New Zealand health authorities announced today that in the past 24 hours 109 cases of SARS-CoV-2 due to transmission to the community were confirmed, ...
Read more

The ring returns to the center of Athens after about 2 years of absence. From today Monday 25 October until Friday 22 July ...
Read more
IT HAPPENS IN ATHENS