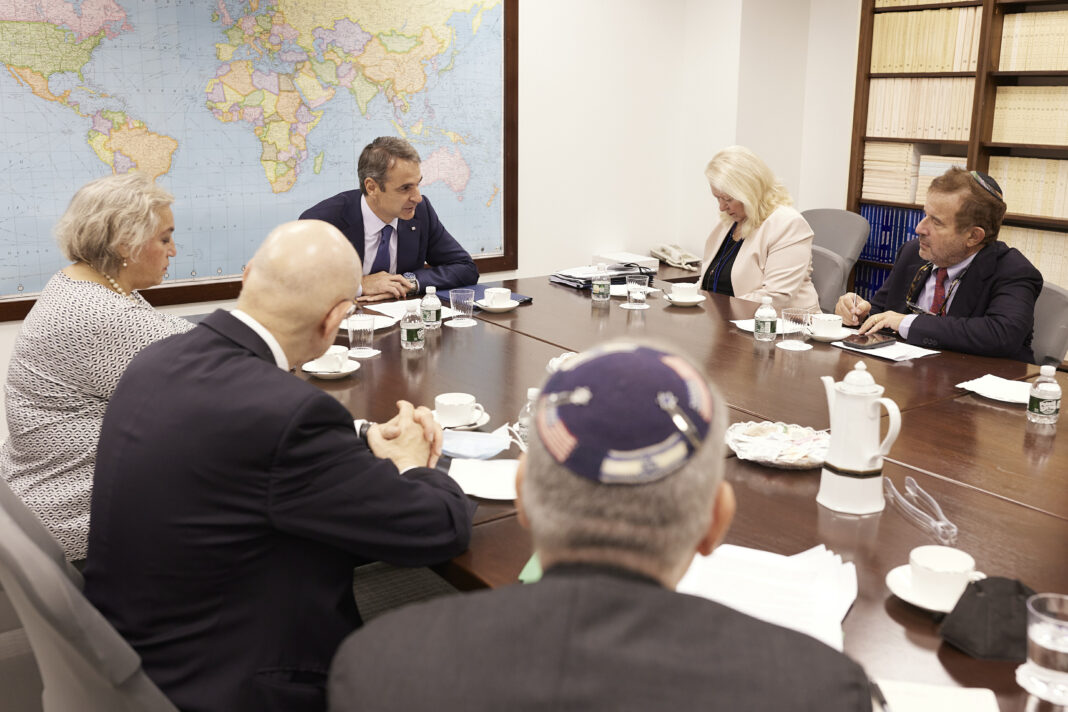 The strategic partnership between Greece and Israel, as well as the importance of the tripartite format of Greece-Israel-Cyprus cooperation, was at the center of Prime Minister Kyriakos Mitsotakis' meeting with the leaders and representatives of major American-Jewish organizations in New York.

Mr. Mitsotakis highlighted the role of Greece as a pillar of stability and security in the eastern Mediterranean and based on the belief that International Law and the UN Convention on the Law of the Sea are the only framework for the peaceful settlement of disputes - a framework which Greece is already implementing in practice with maritime demarcation agreements with neighboring countries, such as Italy and Egypt.

The prime minister also met with the head of the American Jewish Committee, David Harris. The situation in the Eastern Mediterranean was discussed, with special emphasis on the prospect of deepening the 3 + 1 scheme in which Greece, Cyprus and Israel participate, as well as the possibilities of further strengthening cooperation in areas such as the environment and climate change.

There was also an exchange of views on the bill for the Greek-American defense and inter-parliamentary cooperation that is being promoted in the Congress.

During the meeting with the leadership of AIPAC (American Israel Public Affairs Committee) the close cooperation between the two sides was reaffirmed, while the Prime Minister addressed an invitation to the leadership of the Organization to visit our country as soon as the conditions of the pandemic allow.

Mr. Mitsotakis stressed to all his interlocutors that Greece is at the forefront of efforts to eradicate anti-Semitism and educate the younger generations about the atrocities of the Nazis, having assumed the presidency of the International Alliance for Memory since April. of the Holocaust (IHRA).

Mr. Mitsotakis also met with his Georgian counterpart Irakli Garibashvili, with whom they discussed developments at the regional and international level and the prospects for strengthening bilateral economic relations and investment.

The Prime Minister pointed out that international problems should be resolved with respect for international law and United Nations resolutions.

The Minister of Citizen Protection, Panagiotis Theodorikakos, asked the Chief of the Hellenic Police to proceed urgently with a disciplinary control and at the same time a full operational evaluation ...
Read more
WORLD

The European Commission will hold more talks with Britain on Monday on fishing permits, in a bid to resolve a dispute in which ...
Read more
984

The Minister of Citizen Protection, Panagiotis Theodorikakos, asked the Chief of the Hellenic Police to proceed urgently with a disciplinary control and at the same time a full operational evaluation ...
Read more
SPORT CITY

Weapons and swords were found in the house of the 40-year-old perpetrator of the murder in Nea Erithraia on Saturday morning. The military uniform was also found ...
Read more
SPORT CITY

Playing better for most of the match, Asteras Tripolis beat Panathinaikos 2-1, remaining undefeated at home against the "greens" since 2017. For ...
Read more
NEWS