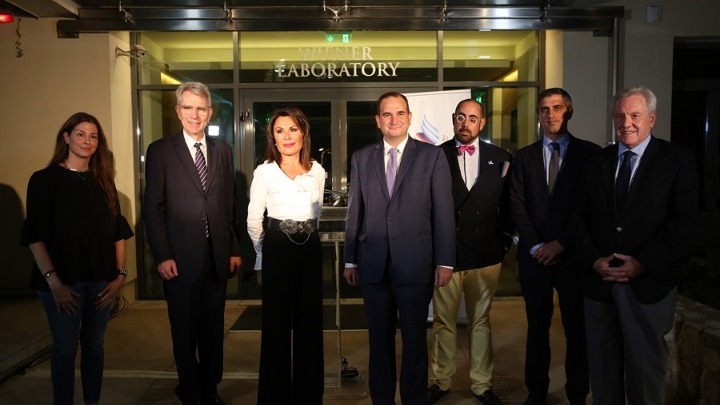 The official launch of the "Connect the dots" program, a start-up program run by The Hellenic Initiative with the support of the Hellenic Initiative, took place today at the American School of Classical Studies in Athens. USA in Athens, as part of the "USA-Greece: Celebrating 200 Years of Friendship" campaign, while it is also under the auspices of the "Greece 2021" Commission.

Through the program, successful Greeks up to 40 years old provide online mentoring to talented and promising entrepreneurs from Greece, who are now starting their careers.

The US Ambassador to Greece, Jeffrey Payat, in his greeting at the event, expressed his pride for the embassy's support in this innovative program, while thanking the "Greece 2021" Commission for putting it under its auspices.

The Commission has done an important job, Mr. Payat stressed, celebrating the history of Greece, honoring its people and highlighting its many achievements during a difficult year.

Mr. Payat then noted that as US President Joe Biden told Greek Prime Minister Kyriakos Mitsotakis during their phone call on Greek Independence Day, the United States will work closely with Greece to pursue a sustainable economic recovery after the pandemic.

"In this regard, we look forward to the US-Greece Strategic Dialogue next month as an opportunity to reaffirm and accelerate the strong progress we have seen in US-Greece trade, investment and technology relations," he said.

At the same time, Mr. Payat stressed that the support to the "Connect the Dots" program is based on long-term cooperation with the Hellenic Initiative to support the Greek economy by helping to cultivate the business ecosystem of Greece.

In addition, Mr. Payat underlined the role of the Greek-Americans in strengthening the ties that unite the two peoples and in supporting the strategic relationship between Greece and the United States that "… has never been stronger."

"As we look forward to the next two hundred years of US-Greek relations, I am confident that the contributions of diaspora organizations such as the Greek Initiative will deepen our friendship and advance our efforts to build an even more stable and prosperous Greece," the ambassador concluded.

For her part, the chair of the Greece 2021 Committee, Gianna Angelopoulou-Daskalakis, personally thanked the US Embassy and Mr. Payat for their participation in the celebrations for the 200th anniversary, adding that the support provided by the US Embassy to the program " Connect the dots "is a modern expression of philhellenism.

Ms. Angelopoulou stressed that most of the actions under the auspices of the committee are aimed at development and prosperity.

Technology can be a gateway to the third century of modern Greek life, said the Commission President, adding that Greek talents must remain in place and "χρειάζεται not have to travel abroad in search of opportunities".

"The connection with the Greek community will be a catalyst for extroversion and development, and the Greek Initiative, which operates in the USA, Canada and Australia, is well aware of this and has contributed a valuable network of contacts for this special initiative." said Mrs. Angelopoulou.

At the same time, Ms. Angelopoulou referred to two emblematic actions carried out by the "Greece 2021" Commission, which aim at the future of Greece. The first is the Forum "Greece in 2040" where representatives of productive classes and social partners try to document the opportunities and challenges that their industry will face in the next 20 years. The conclusions of the Forum will be reflected in a "White Paper" that the ambition of the Commission is to be a valuable tool and will be accessible to all, said Ms. Angelopoulos.

The second is the creation of the Research Institute for Artificial Intelligence, which is done in collaboration with (Konstantinos Daskalakis from MIT, Christos Papadimitriou from Columbia University and Timo Celis from the University of Technology in Melbourne.

The event was also attended by the Deputy Minister of Research & Technology, Christos Dimas and the Secretary General of Research and Innovation, Athanasios Kyriazis.

Traffic regulations are in force today in Athens, due to the events for the handover ceremony of the Olympic Flame for the Winter Olympic Games "BEIJING ...
Read more
984

North Korea has launched a missile of unknown type in the direction of the Korean Sea, continuing a series of weapons tests that it has been conducting for ...
Read more