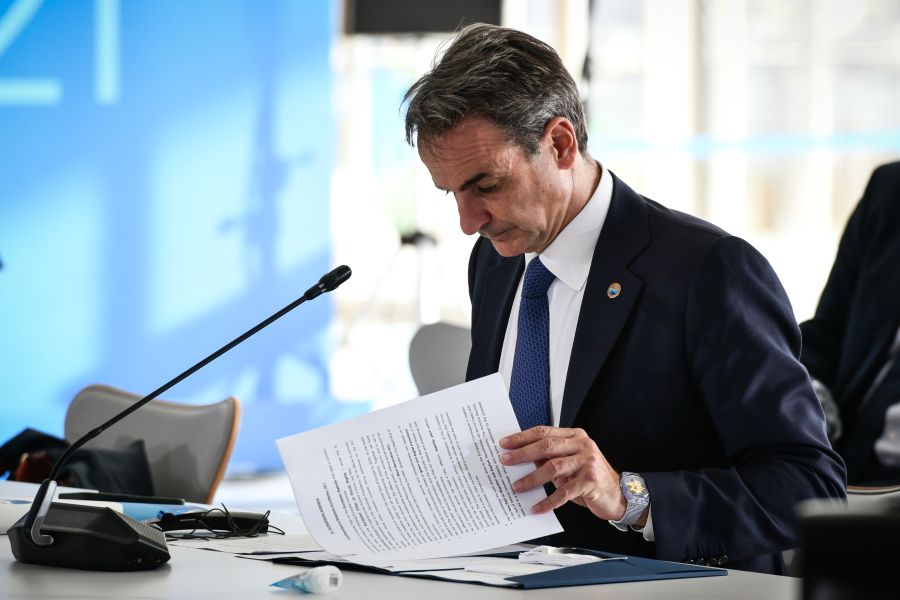 The Prime Minister Kyriakos Mitsotakis is in New York in order to participate in the solemn opening of the 76th UN General Assembly. The multi-day ceremony at United Nations headquarters has traditionally been used to bring the political leadership of the member states to life, which makes the city of the Big Apple a hotbed of critical contacts and developments on various international fronts. Mr. Mitsotakis arrived in New York with the aim of strengthening the network of Greek partnerships at regional and international level, to highlight the positive perspective that opens up for the Greek economy and to strengthen Athens' relations with the particularly active Greek community.

Although the new outbreak of the coronavirus pandemic significantly reduces the meetings, but also the number of members of the delegations, the agenda of the meetings of the Greek Prime Minister is rich. Kyriakos Mitsotakis's goal, as explained by competent government sources, is to strengthen the dynamism and extroversion that the country exudes, while emphasizing its leading role in the wider region, but also in Europe. To show, as the same people emphasize, that Greece is firmly at the forefront of meeting modern challenges, taking initiatives for the new "bets" of the time, such as climate change and environmental protection.

The issue of jointly combating the climate crisis will have a prominent place in the speech of the Greek Prime Minister at the 76th UN General Assembly, early Friday afternoon, New York time. Kyriakos Mitsotakis is expected to recall the important initiatives, but also the measurable goals, which have already been adopted by the Greek government to address the climate crisis, noting that decisive action is urgent, otherwise, as stressed at the recent Summit. of the Countries of the South of the European Union (EUMED9) the consequences will be tragic for everyone.

The Greek Prime Minister is also expected to make a special reference to security issues in the Southeastern Mediterranean, making it clear in every direction that security and stability in the wider region go through good neighborly relations, based on respect for international law, but also of the Convention on the Law of the Sea. In this context, it is expected to once again call on Turkey to abandon delinquency and provocations against Greece and Cyprus. Besides, Cypriot and Greek-Turkish is expected to be the main "menu" of Mr. Mitsotakis' meeting with UN Secretary General Antonio Guterres tomorrow, Thursday.

The participation of the Greek Prime Minister is part of the strengthening of the regional role of the country at a dinner hosted by European Council President Charles Michel to European and African leaders in New York tonight. Also, Mr. Mitsotakis has planned meeting with the President of the Presidential Council of Libya, Mohamed Menfi. Tomorrow morning, moreover, the Greek Prime Minister will have a meeting with the leaders of American-Jewish organizations.

Mr. Mitsotakis is expected to give special weight to his contacts with the Greek Diaspora in the USA. The Greek Prime Minister is expected to have important contacts with members and representatives of the Greek Diaspora at a dinner, which will take place tomorrow night in the American metropolis. On Friday morning, Mr. Mitsotakis will meet with the Archbishop of America, Elpidoforos.

The prospect of increasing foreign investment in our country is expected to explore during the eThe Greek Prime Minister met with important investors in New York. One such will be tomorrow Thursday with the president of Microsoft, Brad Smith, with whom Mr. Mitsotakis maintains an excellent personal relationship. The government also points to the large investment of Microsoft in Athens, but also the sponsorship of the American "colossus" for a digital tour of ancient Olympia, while reminding that the Prime Minister had met and met with Mr. Smith at his Economic Forum. Davos in January 2020.

On Friday morning, Kyriakos Mitsotakis is expected to visit Ground Zero on the occasion of the commemoration of the 20th anniversary of the terrorist attacks on the Twin Towers, on September 11, 2001.

After Monday's break, the Panathinaikos players returned to training today. In the program that was held in "Georgios Kalafatis" emphasis was given by the coaching ...
Read more
GREECE

Vassilis Giannopoulos' play "I am Lengo" directed by Katerina Manteli returns from Monday, October 25 at the Victoria Theater. After...
Read more
GREECE