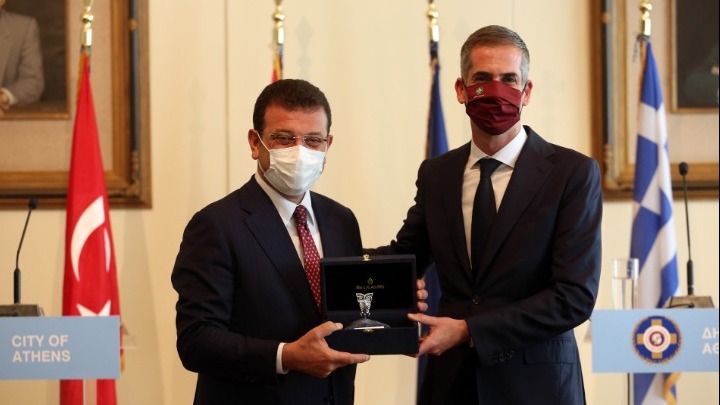 The mayors of Athens and the two cities of Costas expressed the belief that Athens and Istanbul can build bridges of communication, friendship and mutual understanding and jointly solve the problems faced by Greece and Turkey, but also those that cross the borders of the two countries. Bakoyannis and Ekrem Imamoglou respectively after their meeting at the Athens City Hall.

The mayor of Istanbul is paying a two-day official visit to Athens from today, following an official invitation from Mr. Bakoyannis, in return for the latter's visit to the Turkish city last May, where the two mayors signed a memorandum of understanding and cooperation in the fields of culture. .


In his greeting after the meeting of the two men that lasted one hour, Mr. Bakoyannis stressed that "problems are solved from the bottom up. People create them and people solve them. "Even if they are created by governments, or to be precise, regimes can be solved by the people." Referring to city diplomacy, he said: "Our differences are real, but local government is the closest democratic institution to the citizen and this allows us to be able to interpret human emotions more effectively. Those feelings that manifested in our societies with the catastrophic fires that hit our countries in the summer, as well as with the strong earthquakes that took place a few years ago.

As the mayor of Athens noted, "our time raises global problems and global questions to which we are called to give local solutions and local answers. Both the quality and the effectiveness of these solutions and these responses can be global examples, contributing to the common knowledge for the common good ".

He also stressed the need for the two sides to join forces "against the dark forces of cynicism, intolerance and patriotism", while not failing to praise Mikis Theodorakis' "emblematic cooperation" with prominent Turkish intellectuals such as Aziz Nesin. , Yasar Kemal and Zulfu Livaneli for promoting the peaceful coexistence of the two peoples.

Imamoglou: Theodorakis's sounds have pounded the hearts of many Turkish citizens

Mr. Imamoglou also referred to Mikis Theodorakis, saying that his recent death caused sadness in his country as well, as -as he said- "with the sounds of his creations, the hearts of many Turkish citizens have beaten loudly". He also pointed out that as mayors "we have been entrusted with the terrible responsibility of finding the right solutions to the problems of the two big cities, the two metropolises".

He added that Istanbul and Athens "are two cities that are connected by a common historical fate and we are required to continue this bridge that we are trying to build with a deep sense of responsibility and based on the principle of mutual benefit".

"This principle of mutual benefit is the conscience of both mayors and we are determined to move towards a common future," he said, stressing that friendship between the two countries "is not just one of many choices, it is the necessary path." , which we have to walk together, to pave this road together ".

The mayor of Istanbul also stressed the need for the two sides to promote common solutions to problems beyond the borders of the two countries, such as climate change, dealing with earthquakes and migration.

After what statements, the two men proceeded to the ceremonial exchange of gifts. Mr. Bakoyannis offered his guest a statuette with the symbol of ancient Athens, a silver owl and a family heirloom, a small portrait of Eleftherios Venizelos, reminding Mr. Imamoglou that in 1934 he had nominated St. .

For his part, the Turkish mayor offered a painting depicting a horse's head surrounded by Turkish wishes for health and prosperity, a book - a tourist guide to Istanbul and a large box of oriental sweets.