Kyriakos Giannopoulos: "You must not forget the sacrifices of your parents" 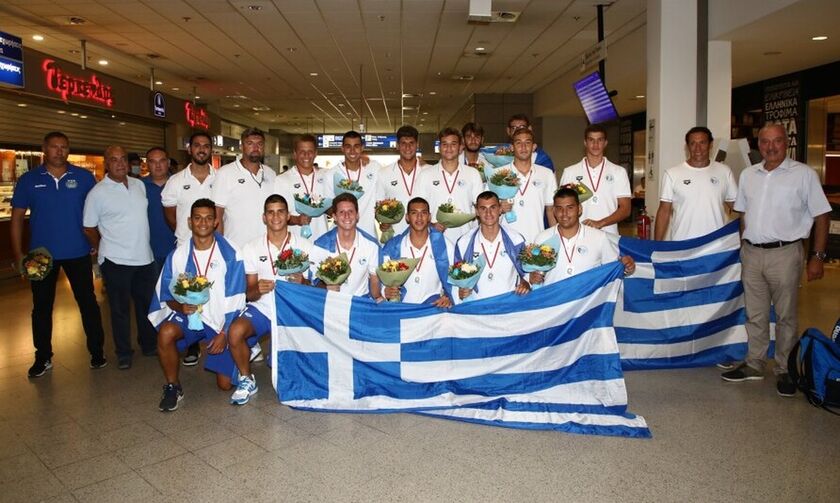 It is based on the mission of the National Youth Team, which won the silver medal at the European Polo Championship in Malta.

The mission of the triumphant National Youth Water Polo Team (K20), which won the silver medal in the respective European Championship, returned from Malta late Monday night (9/17). The young international players, with the medals on their chests, their coaches, but also the whole mission were welcomed upon arrival at the airport "Eleftherios Venizelos" by the representatives of the administration of the Swimming Federation, relatives, friends, friends bouquets, slogans of triumph and the chant "Hellas, Hellas".

From the side of the Board of Directors of KOE, the team was welcomed by the President Kyriakos Giannopoulos and the General Secretary Stefanos Avgouleas, while the curator of National Infrastructure Teams Dimitris Kyrkos and the director George Christoforatos were present.

The President of KOE Kyriakos Giannopoulos, addressing the athletes at the time of their arrival, stressed: "Congratulations to you, to your coaches, to the leader of the mission, who had to leave immediately for Thessaloniki, to the physiotherapists, to the referees. All together you were a fist. You achieved another unique achievement for Greek water polo. But you have the potential to achieve more. Do not forget -first- the clubs from which you come and your coaches there. They helped you get here. And the second thing you should not forget is your parents, who have made sacrifices for you and also deserve applause. "

The Head of Mission and First Vice President of KOE Leonidas Athanasiadis, who immediately traveled to his special homeland Thessaloniki, noted in his statements on the website of KOE: "It's a huge success. I waited to see 14 immature minors and finally met 14 mature men. Everyone is passionate, very dynamic in the races, gentlemen inside and outside the pool, a model of behavior. And a coaching duo with a lot of good chemistry, both among themselves and with the kids, led this team to win this great distinction. These successes create an obligation for us, as the administration of the Federation, to build on them. We are preparing the next generations of polo to have combative teams for men, but also for women ".

The federal coach Elias Macheiras stressed on the website of KOE: "These guys have shown that they can carry the burden of succeeding, in the future, those who brought an Olympic medal to Tokyo. The future will show how long it will take them to reach that high. The secret of success that they were all a fist, they believed from the beginning, they showed passion and soul. We need a little more work to get the gold, that is, to subdue the Serbs. Repetition makes us better, a lot of work makes us better, being with us all makes us invincible. And most of all, our big weapons, the Greek spirit and the soul that while we were physically smaller, in the water we looked the same and better ".

The leader of the team, Andreas Almyra, and one of the leaders in the tournament, said: "The recipe for success was teamwork, that is, we were a punch and of course good defense. This team was made of steel and although we were together for a while, we worked hard, played for each other and brought the best result. We continue to work for the World Championship of the year. We are honored to be considered, even in theory, successors to the Tokyo Silver Olympics. I can not know the future, but it is in our mood to go very high. "

The collaborator of the federal coach Elias Macheira, Thodoris Andreakos, stated: "We worked systematically with the children, there was an excellent atmosphere in the preparation. My bond with Elias Macheiras and our chemistry with the athletes also brought a positive result. The team, game by game found the very good self, was united like a fist and responded positively to the critical points. It helped that we were constantly together for a while. Many thanks to the club coaches and the children's parents for their contribution. Despite the problems of covid-19 in the last year and a half, we remain high and win medals. The Men's National Team with its Olympic medal has now raised the ceiling. We have discussed this, we know it well and we will constantly work hard to stay high ".