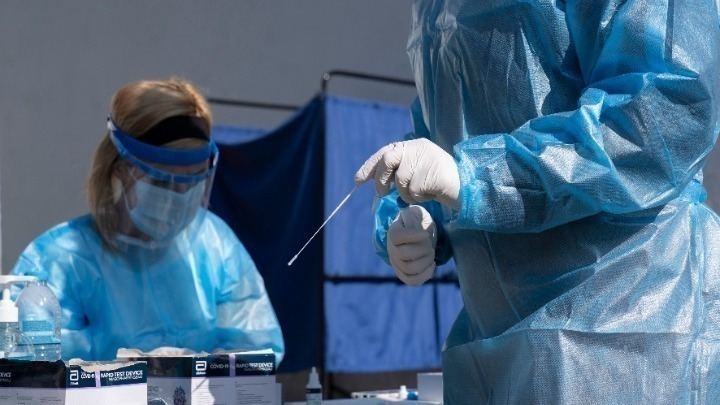 A study by the Medical University of Innsbruck in Austria, led by internationally renowned professor of Greek origin Michael Ioannidis, which included data from 350 patients from across the state of Tyrol, shows that diabetes is a major risk factor for C 19.

A pilot study carried out in the spring of 2020, led by the director of the intensive care unit of the University Clinic, Michael Ioannidis, had already hypothesized this connection.

About 30% of critically ill patients had known (pre) diabetes, for over 85% of intensive care patients the so-called HbA1c value - which provides information on the long-term blood sugar level and if it is above 6,5 , there is now talk of diabetes - it was increased, as the professor of Greek origin at the Medical University of Innsbruck explains in an interview with the Austrian News Agency (APA).

"Well-adjusted diabetics had milder progression," while only one-third of patients knew they had elevated HbA1c and "therefore, it would be advisable to measure HbA1c for all people as part of screening," he said. himself, thus renewing a requirement he had already made in the past - something that the Austrian Diabetes Society is also asking for.

"We were able to confirm both that diabetes is a significant risk factor for intensive care patients and that the mortality of patients with Covid-19 with high HbA1c in the ventilator was increased," said Mr. Ioannidis, summarizing the results. of the second survey in the spring of 2021.

As he explains, last year, doctors had already found elevated HbA1c levels in above-average coronavirus intensive care patients, but it was only a "small study group" in a pilot study.

This year, since the end of May, the database included about 500 patients across Tyrol, HbA1c values ​​were available for 350 of them, as it is not yet automatically recorded.

He adds that international studies have shown, in the meantime, that being overweight also favors the serious development of Covid-19 and a link between (pre) diabetes and obesity could also be confirmed in the University of Innsbruck study, but this was not so crucial, as normal weight patients will also become seriously ill.

In his interview, Michael Ioannidis, a professor of Greek descent at the Medical University of Innsbruck, emphasizes that the research findings have a direct effect on the treatment and prevention of severe Covid-19, and, for example, he is currently investigating whether the control of sugar in Intensive Care Units could alleviate the course of the disease.

The Commission, in cooperation with UEFA, is launching a new campaign to tackle climate change. A video with famous football players, who with football tricks ...
Read more
GREECE

Τζ. Payat: Greek-American relations are stronger than ever

"It was a good week for Greek-American relations," said the American ambassador to Athens, Jeffrey Payat, just a few days after ...
Read more
CIVILIZATION

Christmas at the Palace: The pre-sale has started

This Christmas, we are all renewing our appointment, at the Megaron, with the music, theater and dance that we missed so much! Maybe last year we did not have the opportunity to enjoy ...
Read more
984

The Minister of Transport, Costas Karamanlis, spoke about a reduction of 50% of the travel permits in the ring. Speaking to SKAI, the minister clarified that ...
Read more
GREECE

AADE continues to simplify and facilitate the digital submission of its forms for the better service of citizens and businesses. In this context, it has created four ...
Read more
984

New Democracy MP Dora Bakoyannis was diagnosed with multiple myeloma. In fact, she made the announcement on her twitter page, writing that ...
Read more
984

The Prime Minister accused Alexis Tsipras for arbitrary comparisons, false conclusions and miserable complaints, adding that there is no ...
Read more

ELAS is proceeding with traffic regulations on Papanikoli Street, in Chalandri, from today Monday after the subsidence of the road. According to the General Police Directorate ...
Read more
NEWS

Teachers outside the Ministry of Education are protesting against the merger of departments in schools across the country. The teachers ask that there should be no ...
Read more
IT HAPPENS IN ATHENS

The "greening" of the ring, which returns to the life of the Athenians from October 25, will leave several thousand vehicles outside the center of Athens, ...
Read more